Mobile Web applications, as the name suggests, are applications that you can access from a mobile device, such as a mobile phone or a Pocket PC. In today's dynamic business scenario, it is essential that users not be limited to accessing their data or the Internet only from their personal computers at home or at the office. Instead, it has become a necessity to be able to access their personal or business data and Internet from anywhere at any time. Users should have the capability to access their data or an Internet site from their mobile devices. This can be achieved through the use of mobile Web applications.

Following are the features of the Mobile Internet Toolkit that make it easy to create mobile Web applications in Visual Studio .NET: 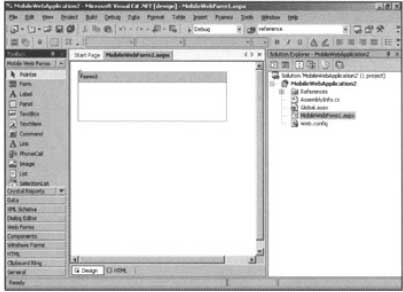 The Mobile Web Form with a Control Added 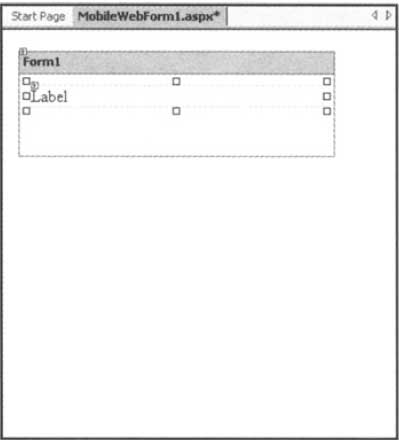 An emulator is a device that simulates the mobile Web application environment on your personal computer. To do this, you first need to install an emulator and emulator software on your machine. Figure shows an emulator for a mobile phone. 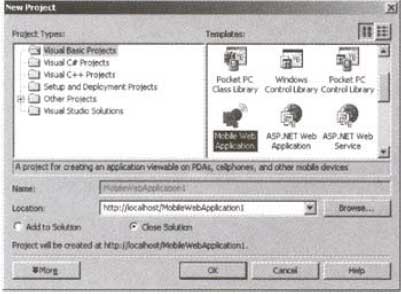 As discussed earlier, different protocols are used to transfer mobile Web applications on different mobile devices. These protocols include TCP/IP, WAP, HTTP, and so on. This section discusses some of these protocols.

As the name suggests, TCP/IP is a set of protocols that transfers data over the network. This implies that TCP/IP defines the set of rules to follow while you're transferring data across computers over the network. In addition to transferring data over a network, TCP/IP allows you to share resources and enable communication across computers over the same network or different networks. Therefore, TCP/IP is a platform-independent protocol that can transfer data over networks in the form of data packets. For example, you can use TCP/IP to transfer data from a computer that is running Windows to another computer that is running DOS, Unix, or NetWare.

When you need to transfer data across a network, TCP/IP breaks the data into smaller data packets that you can transfer over the network easily. Then, at the receiver end, the data packets are reassembled to produce the original data. The IP address of the destination location defines the address of the location to which the data packets need to be transferred. As discussed earlier, TCP/IP is the transfer protocol that accesses a mobile Web application from a PDA or other device that supports TCP/IP-based network communication.

In earlier sections, we discussed the problems that the users face while accessing traditional mobile Web applications from a mobile device. These problems include higher bandwidth requirements, higher processor and memory capacities, and smaller screen sizes. As a solution to these problems, the WAP Forum developed an industry standard that defines the set of rules for communication between wireless devices and the application developed to be accessed from a wireless device. A WAP-enabled device has features that are appropriate for accessing mobile applications. These features include limited memory, a battery, and the ability to utilize maximum processor capacity. As a result, it has become significantly easier to access an application or an Internet site from a WAP-enabled device.

Having introduced you to the WAP technology, we will now discuss the WAP architecture that makes it possible to transfer a mobile Web application to a wireless device.

The WAP architecture is a three-layered structure that includes a client, a server, and an intermediate layer. This intermediate layer includes a WAP gateway, which is an interface between the client and the server. A WAP gateway is software that comprises encoders and decoders used to transmit data in the format that the receiving device understands. This is made possible because of the support that the WAP gateway extends to technologies such as WML (Wireless Markup Language) and XML (Extensible Markup Language). These markup languages define the format for displaying data and describe the data to be displayed in a text format.

When a client—a wireless device in our case—sends a request to the server, a connection is made to the WAP gateway. The encoders that are present in the WAP gateway then encode the request as per the transfer protocols. The request is then transferred to the server, and the server sends a response to the client in the form of a site that the client requested. However, the server can process only the request made for a WAP-enabled Web site. See Figure so that you can more easily understand this architecture.