Creating a Web Service from a Class File - XML

In most real-life situations, deploying a Web service as a .jws file is insufficient. This implies that these Web services are not able to meet the requirements of a real-life Web service, such as the ability to specify custom type mappings or create handler chains. Therefore, in such complicated cases, a deployment file, as shown in the following code, is used:

Save the file as deploy.wsdd.

In the preceding code, we created a new Web service that uses the Java class: CCheck. Then, the code exposes the isValid() method.

Note?/td>
You can expose several methods in the preceding code. To do so, you need to separate the names of methods with spaces.

The next step is to deploy the Web service. The steps to do so are as shown:

In this case, the requestor and provider applications (endpoints in a Web services scenario) are AxisServlet instead of .jws files. Now, the servlet locates and creates an instance of the class that corresponds to the service name CCheckServer. Next, the servlet converts the SOAP messages into Java calls and invokes the Java calls on the instantiated service class.

Note?/td>
The differences in the preceding code and the code used to call a Web service with endpoints as .jws files are in bold type.

To create a client application by using the tools in the Axis toolkit, you first need to create a proxy class for the Web service. To do this, use the following command:

Options Used with the Wsdl2java Command 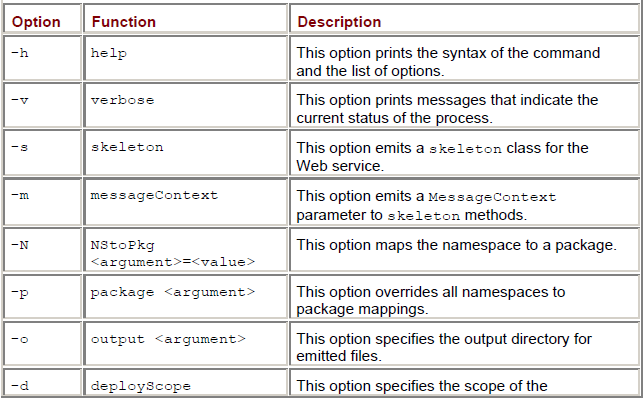 The following section discusses the contents of these files in detail.

As discussed, the Wsdl2java command creates a file that contains a Java class, CCheckServerPortType.Java. The code for this file is as follows:

In addition, a file that contains stubs is created. The content of the CCheckServerSoapBinding Stub.java file is as follows:

The Wsdl2java command creates a file that contains the code for the Web service proxy class. The content of the CCheckServer.Java file is shown in the following code:

Compiling the Files That the Wsdl2java Command Created

When these files are created, you need to compile them in the following order:

Create a Client Application That Uses the Files