The internal architecture of SOAP can be divided into three components, as shown in the following list:

The following section discusses these components in detail.

The components of a SOAP message are shown in Figure.

components of a SOAP Message. 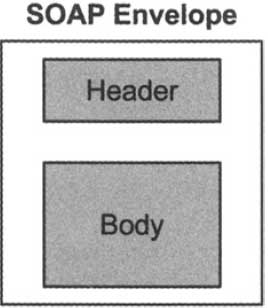 To understand the data stored in the SOAP envelope, consider the following code, which is an example of a simple SOAP message that demonstrates a function call by passing parameters to it:

The response of the preceding code sample is as shown: 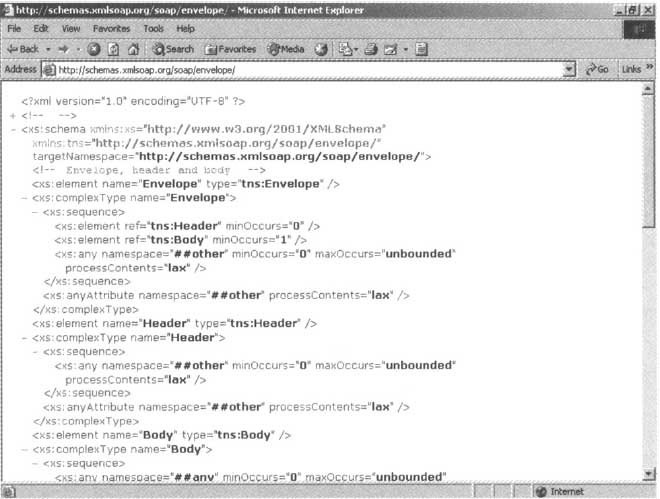 In addition, the SOAP message might include another namespace as shown: 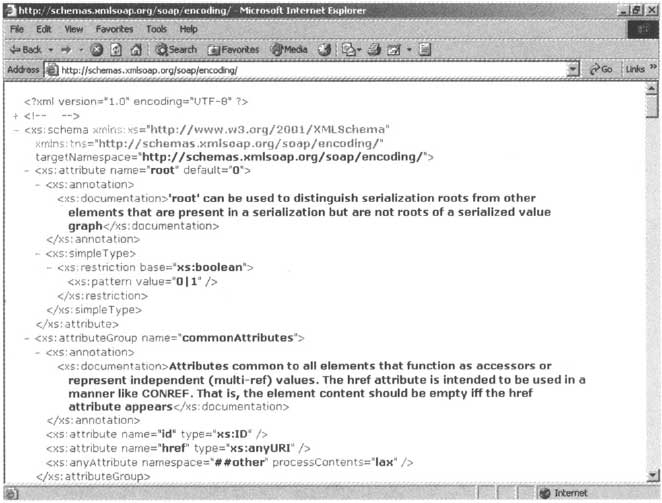 Note?/td>
It's essential to include the envelope namespace in all SOAP messages. However, including the encoding namespace is optional.

These namespaces point to XML schemas; therefore, they are included in a SOAP message to validate it. The SOAP messages are validated according to the rules that are defined in the XML schemas.

The Header element includes information about how the receiving application should process the SOAP message. This information is represented in the form of elements of the Header element. These elements must be fully qualified and include a namespace, which is identified by a URI and a local name.

An example of the Header element is shown in the following code sample:

As you can see, the preceding code includes a URI . This URI indicates that the receiving application is the intermediate application that needs to forward the SOAP message to another application.

An example of the Body element is as shown:

When a SOAP message is transferred over the network, you must ensure that the message is in the format that the receiving application can easily understand and interpret. This implies that you need to serialize the content of the Header and Body elements of the SOAP message in the format that the receiving application understands. To do this, you can use the System.XML. Serialization namespace, which serializes data to an XML document. Most applications can understand an XML document that is being text based. You can include this XML document in the Body element of a SOAP message to be transferred over the network.

The SOAP specification supports two formats of serializing SOAP messages, as discussed in the following list:

The SOAP specification defines two styles in which you can format a SOAP message. These formats are discussed in the following list:

The request for the procedure can be made using SOAP in the form of a SOAP message. This message includes the request or the response of the request. To define the manner in which the messages are exchanged, a specification called the RPC convention is developed. The RPC convention defines a set of rules that you can use to serialize the procedure calls in the form of a SOAP message.

The following sections discuss the call and result statements.

To call the ChangeCase procedure, you need to use the following call statement:

The preceding code calls the ChangeCase procedure and passes a string type parameter to the method call statement.

Note?/td>
The preceding code uses a namespace that is represented by the hypothetical URL http://www.wisdomjobs.com/.

The following code shows the response to the call statement for the ChangeCase procedure:

The preceding code sends a response to the call statement after processing the request. The string type value, soap, that the ChangeCase procedure returns is an output parameter and is defined by the same name: str1.

The encoding rules specify the types that you can include in a SOAP message. These data types can be either simple or compound. The following section discusses the simple and compound data types.

To invoke this struct, you need to create an instance as shown:

Now you can serialize the struct Student by using the SOAP encoding rules, as shown in the following code:

In the preceding code, a struct called Student is declared. In addition, a namespace, n, is declared with a Student data type. The n namespace points to the schema that defines the Student struct.

The preceding code creates an array called scores. The data type of the array is integer, which is specified by the arrayType attribute. The values are assigned to the scores array by using the item attribute.

Having looked at the types of data types, you will now learn about the rules for encoding data types in a SOAP message.

The rules for serializing data types are discussed in the following list:

Until now, we have discussed the architecture of SOAP. Now we will discuss the processing of SOAP messages.