At the time of independence, the major customers of banks comprised mostly of agro-based industry such as groundnut, cotton, cocoa, rubber etc. and traders in these commodities, whose operations were mostly seasonal.

Bank credit was extended largely against the pledge of stocks where under the financing bank took the goods into its custody in lock and key an released them when the borrower credited an equivalent value of the goods in his borrowers account. Often goods were released against trust receipt to enable the borrower to pay proceeds within a stipulated period.

When the bank received the goods under its lock and key, it released the value of the goods less the stipulated margin in the pledge cash credit account of the borrower, the borrower was expected to utilize the funds so generated for his business purpose. he had the right to take delivery of the goods against payment and pledge further goods, depending upon his business requirements. In case he was required to extend credit to his buyer, the bank freely discounted his promise trade bills so that he could continue his operating cycle smoothly.

Banks obtained information from the borrowers in prescribed application forms on the projected or estimated holdings of inventories and receivables based on their estimated production cycles and annual sales estimates. The holdings of inventories were worked out in terms of the number of days/weeks, months of stocking period. The level of receivables was determined by the credit terms extended by the borrower and the forces of demand and supply, then the total working capital needs were computed.

When the total working capital requirement is determined as above, the banker, after applying suitable margins arrives at the permissible bank finance.

The surplus long-term resources of the borrower represent the excess long-term funds (capital and long term liabilities) after meeting all fixed and non-current assets. In simplex terms, the surplus long-term fund is equal to the excess of current assets over current liabilities. This surplus is also known as the liquid surplus or the net working capital (NWC). The NWC figure to be taken into consideration for margin purposes would be either the NWC as per the largest balance sheet of the borrower or the projected balance sheet. The projected balance sheet is preferable because while assessing the working capital requirements, the bank takes into account the projected build up of current assets.

From the security point of view, the raw material and finished goods attract lower margin while stock in process or work in process attracts higher margins. Accounts receivable and bill receivable attract margin in view of the difficulties in collecting individual bad debts while bills receivables are being represented by negotiable instrument easier to recover or due upon. 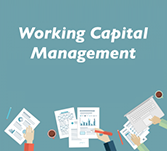