Regular expressions must begin with an exclamation point (!), except when defined in a Check GUI dialog box, a text checkpoint, or a match, obj_find_text, or win_find_text statement. All characters in a regular expression are searched for literally, except for a period (.), asterisk (*), caret (^), and brackets ([ ]), as described below. When one of these special characters is preceded by a backslash (), WinRunner searches for the literal character. For example, if you are using a win_find_text statement to search for a phrase beginning with “Sign up now!”, then you should use the following regular expression: “Sign up now!*.”.

The following options can be used to create regular expressions:

A period (.) instructs WinRunner to search for any single character. For example,

matches welcomes, welcomed, or welcome followed by a space or any other single character. A series of periods indicates a range of unspecified characters.

Matching Any Single Character within a Range

You can use a hyphen (-) to indicate an actual range. For instance, to match any year in the 1960s, write:

Brackets can be used in a physical description to specify the label of a static text object that may vary:

In the above example, WinRunner can identify the static_text object with the label “Quantity” when the quantity number varies.

A hyphen does not signify a range if it appears as the first or last character within brackets, or after a caret (^).

A caret (^) instructs WinRunner to match any character except for the ones specified in the string. For example:

matches any non-alphabetic character. The caret has this special meaning only when it appears first within the brackets.

Note that within brackets, the characters “.”, “*”, “[“ and “” are literal. If the right bracket is the first character in the range, it is also literal. For example:

An asterisk (*) instructs WinRunner to match one or more occurrences of the preceding character. For example: 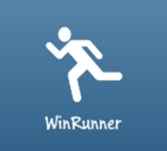