Each event has a source. This is the object to which the action is applied, such as the button that was clicked. The source is responsible for alerting the operating system that an event has occurred. It does so by sending an event notification message, generally to its parent or container window. For this reason, Microsoft refers to the event source as the sender.

An event often has an event argument, which is simply data that pertains to the event. For instance, the press of a keyboard key generates an event that includes event arguments describing the keycode of the key pressed and information on the state of modifier keys (the Shift, Alt, and Ctrl keys). The event arguments are part of the message sent by the event source.

The VB IDE can be used to insert an empty event handler, complete with the proper event parameters, for any built-in control. The procedure is simply to select the control, then click the Events button in the Properties window. This displays a list of built-in events for the control. Selecting one of these events causes the VB IDE to insert an empty event handler for that event into the code editor window.

The sender variable is the source of the event. The second parameter is an object whose properties describe the event arguments.

As another example, double clicking a Windows form causes the VB IDE to insert the following empty event handler:

To define a custom event in a class module, we can use the WithEvents keyword. To illustrate with a very simple example, suppose we create the class module shown here:

In a class module with a Windows form, we declare a variable of type Class1 using the WithEvents keyword to hook the class' events:

This automatically causes the VB IDE to add the variable name ev to the left-hand drop-down list above the code window. When we select this variable, the right-hand drop-down list displays the events for this class. In this case, the list contains only the ev_AnEvent event. Selecting this event places an empty event shell in the code editor window (to which we have added a single line of code):

Finally, in a button click event, we can place code to implement our simple example:

We should note that the WithEvents keyword approach to event handling has one slight drawback. Namely, we cannot use the New keyword with WithEvents, as in:

Thus, the object must be instantiated separately from the variable declaration, as we did in the previous example.

The AddHandler statement can be used to bind an event handler to a built-in or custom event using code. This makes it possible to bind several event handlers to a single event. To illustrate, proceed as follows. Add the default event handler for a form's Click event:

Next, add another procedure with the same signature as the default event handler:

Finally, to bind the function Form1Click to the Click event, we use the AddHandler statement:

This is actually shorthand for:

In general, the AddHandler statement has the following syntax: 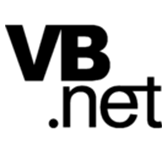