Notice the word changing in the definition of what it means to manage requirements. The UP embraces change in requirements as a fundamental driver on projects. That's incredibly important and at the heart of waterfall versus iterative and evolutionary thinking.

What are the process details? How to do partial, evolutionary requirements analysis combined with early design and programming, in iterations? See "How to do Iterative and Evolutionary Analysis and Design?" It provides a brief description and a picture to help explain the process. See "Process: How to Work With Use Cases in Iterative Methods?". It has more detailed discussion.

In the 1960s and 1970s (when I started work as a developer) there was still a common speculative belief in the efficacy of full, early requirements analysis for software projects (i.e., the waterfall). Starting in the 1980s, there arose evidence this was unskillful and led to many failures; the old belief was rooted in the wrong paradigm of viewing a software project as similar to predictable mass manufacturing, low change rates. But software is in the domain of new product development, with high change ranges and high degrees of novelty and discovery.

Recall the key statistic that, on average, 25% of the requirements change on software projects. Any method that therefore attempts to freeze or fully define requirements at the start is fundamentally flawed, based on a false assumption, and fighting or denying the inevitable change.

Underlining this point, for example, was a study of failure factors on 1,027 software projects [Thomasol]. The findings? Attempting waterfall practices (including detailed up - front requirements) was the single largest contributing factor for failure, being cited in 82% of the projects as the number one problem. To quote the conclusion:

... the approach of full requirements definition followed by a long gap before those requirements are delivered is no longer appropriate.

The high ranking of changing business requirements suggests that any assumption that there will be little significant change to requirements once they have been documented is fundamentally flawed, and that spending significant time and effort defining them to the maximum level is inappropriate.

Another relevant research result answers this question: When waterfall requirements analysis is attempted, how many of the prematurely early specified features are actually useful in the final software product? In a study [Johnson 02] of thousands of projects, the results are quite revealing - 45% of such features were never used, and an additional 19% were "rarely" used. See Figure Almost 65% of the waterfall - specified features were of little or no value!

These results don't imply that the solution is to start pounding away at the code near Day One of the project, and forget about requirements analysis or recording requirements. There is a middle way: iterative and evolutionary requirements analysis combined with early timeboxed iterative development and frequent stakeholder participation, evaluation, and feedback on partial results.

Actual use of waterfall - specified features 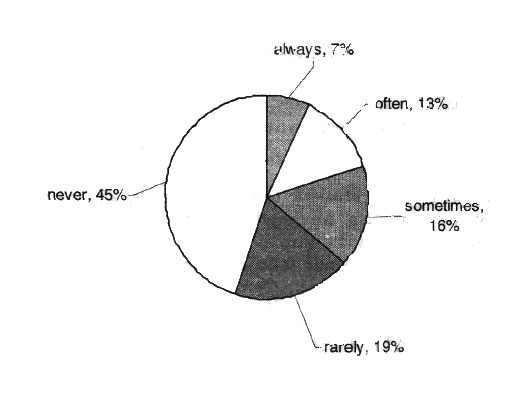