BANK NOTES AND DEPOSITS - The Mystery of Banking

Through the centuries, there have been two basic forms of money warehouse receipts. The first, the most obvious, is the written receipt, a piece of paper on which the deposit bank promises to pay to the bearer a certain amount of cash in gold or silver (or in government paper money). This written form of warehouse receipt is called the bank note. Thus, in the United States before the Civil War, hundreds if not thousands of banks issued their own notes, some in response to gold deposited, others in the course of extending fractional reserve loans. At any rate, if someone comes into the possession (either by depositing gold or by selling a product in exchange) of, say, a $100 note from the Bank of New Haven, it will function as part of the money supply so long as people accept the $100 note as a substitute, a surrogate, for the gold. If someone uses the $100 note of the Bank of New Haven to buy a product sold by another person who is a customer of the Bank of Hartford, the latter will go to his bank and exchange the $100 New Haven note for a similar note from the Bank of Hartford.

The bank note has always been the basic form of warehouse receipt used by the mass of the public. Later, however, the reemerged another form of warehouse receipt used by large merchants and other sophisticated depositors. Instead of a tangible receipt, the bank simply opened a deposit account on its books. Thus, if Jones deposited $10,000 in a bank, he received, if he wished, not tangible bank notes, but an open book account or deposit account for $10,000 on the bank’s books. The bank’s demand debt to Jones was not in the form of a piece of paper but of an intangible book account which could be redeemed at anytime in cash. Confusingly, these open book accounts came to be called demand deposits, even though the tangible bank note was just as much a demand deposit from an economic or a legal point of view. When used in exchange, instead of being transferred physically as in the case of a bank note, the depositor, Jones, would write out an order, directing the bank to transfer his book account to, say, Brown. Thus, suppose that Jones has a deposit account of $10,000 at the Rothbard Bank.

Suppose now that Jones buys a hi-fi set from Brown for $3,000. Jones writes out an order to the bank, directing it to transfer $3,000 from his open book account to that of Brown.The order will appear some what as follows:

This written instrument is, of course, called a check. Note that the check itself is not functioning as a money surrogate here. The check is simply a written order transferring the demand deposit from one person to another. The demand deposit, not the check, functions as money, for the former is a warehouse receipt (albeitun written) for money or cash.

The Rothbard Bank’s balance sheet is now as follows:

Note that from this purchase of a hi-fi set, nothing has changed in the total money supply in the country. The bank was and still is pursuing a 100 percent reserve policy; all of its demand liabilities are still covered or backed 100 percent by cash in its vaults. There is no fraud and no inflation.

Economically, then, the demand deposit and the tangible bank note are simply different technological forms of the same thing: a demand receipt for cash at the money warehouse. Their economic consequences are the same and there is no reason for the legal system to treat them differently. Each form will tend to have its own technological advantages and disadvantages on the market. The bank note is simpler and more tangible, and doesn’t require quite the same degree of sophistication or trust by the holders of the receipt. It also involves less work for the bank, since it doesn’t have to change the names on its books; all it needs to know is that a certain quantity of bank notes is out in circulation. If Jones buys a hi-fi set from Brown, the bank note changes hands without anyone having to report the change at the bank, since the bank is liable to the note-holder in any case. For small transactions—purchase of a newspaper or ham sandwich—it is difficult to visualize having to write out a check in payment. On the other hand, demand deposits have the advantage of allowing one to write out checks for exact amounts. If, for example, the hi-fi set costs some non rounded amount, such as $3,168.57, it may well be easier to simply write out the check than trying to find notes and coins for the exact amount—since notes will generally be in fixed denominations ($1, $5, $10, etc.).Also, it will often be more convenient to use demand deposits for large transactions, when amassing cash can be cumbersome and inconvenient. Moreover, there is far greater danger of loss from theft or accident when carrying cash than when having a certain known amount on a bank’s books.

All of these factors will tend, on the free market, to limit theuse of bank deposits to large users and for large transactions. A slate as World War I, the general public in the Western world rarely used bank deposits. Most transactions were effected in cash, and workers received cash rather than bank checks for wages and salaries. It was only after World War II, under the impetus of decades of special support and privilege by government, that checking accounts became nearly universal.

A bank can issue fraudulent and inflationary warehouse receipts just as easily in the form of open book deposits as it canin bank notes. To return to our earlier example, the Rothbard Bank, instead of printing fraudulent, uncovered bank notes worth $80,000 and lending them to Smith, can simply open up a new or larger book account for Smith, and credit him with $80,000, there by, at the stroke of a pen and as if by magic, increasing the money supply in the country by $80,000.

In the real world, as fractional reserve banking was allowed to develop, the rigid separation between deposit banking and loan banking was no longer maintained in what came to be known as commercial banks. The bank accepted deposits, loaned out its equity and the money it borrowed, and also created notes or deposits out of thin air which it loaned out to its own borrowers.

On the balance sheet, all these items and activities were jumbled together. Part of a bank’s activity was the legitimate and productive lending of saved or borrowed funds; but most of it was the fraudulent and inflationary creation of a fraudulent warehouse receipt, and hence a money surrogate out of thin air, to be loaned out at interest.

Let us take a hypothetical mixed bank, and see how its balance sheet might look, so that we can analyze the various items. 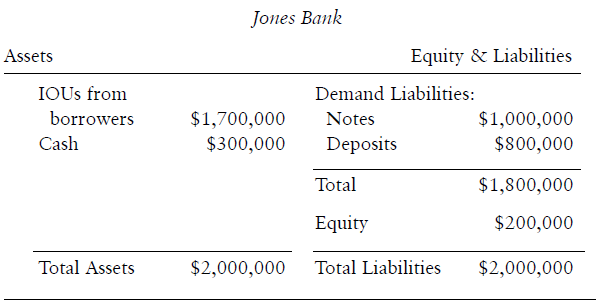 Our hypothetical Jones Bank has a stock holders’ equity of $200,000, warehouse receipts of $1.8 million distributed as $1million of bank notes and $800,000 of demand deposits, cash in the vault of $300,000, and IOUs outstanding from borrowers of$1.7 million. Total assets, and total equity and liabilities, each equal $2 million.

We are now equipped to analyze the balance sheet of the bank from the point of view of economic and monetary importance. The crucial point is that the Jones Bank has demand liabilities, instantly payable on presentation of the note or deposit, totaling $1.8 million, where as cash in the vault ready to meet these obligationsis only $300,000. The Jones Bank is engaging in fractional reserve banking, with the fraction being

or 1/6. Or, looking at it another way, we can say that the invested stock holder equity of $200,000 is invested in loans, while the other $1.5 million of assets have been loaned out by the creation of fraudulent warehouse receipts for money.

The Jones Bank could increase its equity by a certain amount,or borrow money by issuing bonds, and then invest them in extra loans, but these legitimate loan operations would not affect the1/6 fraction, or the amount of fraudulent warehouse receipts outstanding. Suppose, for example, that stock holders invest another $500,000 in the Jones Bank, and that this cash is then loaned to various borrowers. The balance sheet of the Jones Bank would now appear as shown in Figure below.

FRACTIONAL RESERVE IN A MIXED BANK

Thus, while the Jones Bank has extended its credit, and its new extension of $500,000 of assets and liabilities is legitimate, productive and non inflationary, its inflationary issue of $1,500,000 continues in place, as does its fractional reserve of 1/6.

A requirement that banks act as any other warehouse, and that they keep their demand liabilities fully covered, that is, that they engage only in 100 percent banking, would quickly and completely put an end to the fraud as well as the inflationary impetus of modern banking. Banks could no longer add to the money supply, since they would no longer be engaged in what is tantamount to counterfeiting. But suppose that we don’t have a legal requirement for 100 percent banking. How inflationary would be a system of free and unrestricted banking, with no government intervention? Is it true, as is generally believed, that a system of free banking would lead to an orgy of unrestricted money creation and inflation? 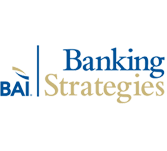