Surprisingly, it is very difficult to say when the testing phase is complete and when the product can be released. As you keep testing the software, it may happen that you keep getting a defect—and this process may go on forever. On the other hand, you may not detect any defect, but what is the guarantee that there is no hidden defect? And, that defect may show its effect on the day the software is delivered to the customer. See the irony, after all the effort of developing and testing the software, you are not sure whether it is ready for shipment! This proves our point once more: "testing is difficult". Instead of relying on gut feeling, we need to arrive at a scientific method to declare that the testing is complete and the product is ready for shipment.

When is Testing Complete?

It is very difficult to say when testing is complete. Three criteria used in practice for completion of testing are:

In practice, unfortunately, the first two criteria are followed. During the planning stage, certain time and money (or effort) are allocated for the testing process. The test team keeps testing the software, and when they run out of time (or money), the product is delivered (to avoid the penalty for late delivery). Most managers do not realize that this is a very dangerous practice because if the software fails at customer's site, the reputation of the organization is at stake.

'Completion of Testing' based on defects Found per Week 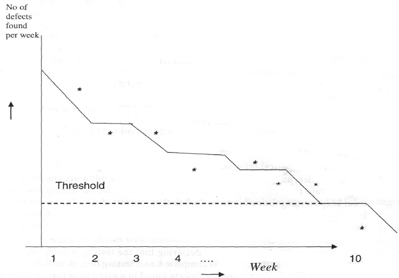 Major defects will not lead to a system crash, but may result in some portions of the application difficult to use, such as difficult navigation of the menus.

Minor defects can be tolerated, such as lack of help for some functionality, a spelling mistake in an error message, incorrect ordering of control buttons in a GUI etc.

While recording the defects in a defect log sheet, the severity of the defects also needs to be noted down. If a critical defect is present in the code, then the software is not ready for delivery. Only a few major defects are allowed. Similarly, a threshold needs to be kept on the number of minor defects. As the threshold depends on the application, the project manager/test team member has to use his judgment in fixing the thresholds on major and minor defects.

After analyzing the test report, the project manager needs to decide whether the software is ready for delivery or not. 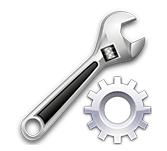