How an invoice is generated in telecom billing?

Many of the billing systems generate structured ASCII text which includes bill information. Bill data for each bill will be written initially to either database or flat text files. Format of the data at this stage will be the same, regardless of how the data is to be processed.

This bill data will then be processed by one of the formatting engines for producing output in the preferred form. For example, paper, CD-ROM, etc.

There are many Billing Systems which provide internal Bill Formatting tools. If a billing system does not provide capable tool for generating formatted bills, then third party tools available like DOC1 can be used. 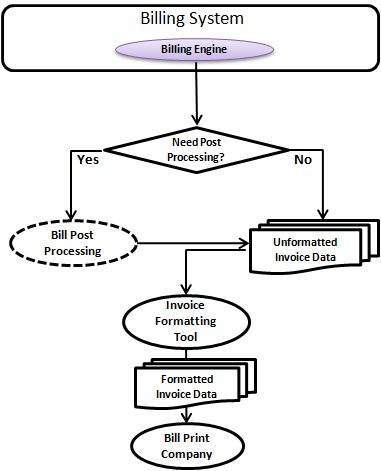 Bill data consists of series of lines of ASCII text. Each line takes the form

TAGNAME and tag value can be separated by a tag separator (tagsep) of a space. Tagvalue can be either a single value or a list of values separated by delimiters (sep). The delimiter used is a comma unless specified.

A Billing Engine cannot generate all the required information in the bill or there may be a requirement to perform some special calculation on the data provided in the invoice. This is called as Bill Post Processing and usually done by a custom component called Bill Post Processor (BPP).

A BPP can be written in your preferred programming language. It will read a raw invoice file and performs necessary modification into this file before passing it for the final formatting.

None of the billing systems provide out-of-the-box BPP functionality, as requirements may vary from operator to operator and this process cannot be standardized. At most, billing system can provide a plug-in point to plug your custom BPP along with Billing Engine.

As mentioned above, output of the Billing Engine will be a structured ASCII text which consists of bill information content. Mapping can be established between source invoice file tags generated by the billing system and tags required by DOC1. DOC1 requires fixed length tags as shown below.

Below is a hypothetical sample from the invoice file provided

Now using the above translations, a final file will be generated for DOC1 and DOC1 which takes care of generating final invoice using the information provided.

Some modifications can also be performed at DOC1 level, but it will not provide much flexibility for modifying the invoice. You can try latest version which help you much more the expectations.

Once all the accounts are billed and invoices are formatted using either internal or external bill formatter, these invoices will be sent to the Bill Print Company for final printing.

If an operator makes use of Electronic e-mail facility for sending a bill to their customer, then a copy of the same bill will be sent to e-mail system for sending it to the end customer.

Tier 1 operators (having 20-30 million or more customer base) usually outsource this task including bill distribution.

Once the invoice is generated, they will be sent to the end customers to collect revenue from the customer. We will discuss revenue collection process in the next chapter.

Before proceeding further, we will cover Credit Control Part, which is very important and should be covered before revenue collection. 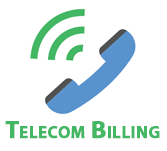