THE MANY FACES OF FAILURE - Strategic Planning for Project Management

Previously we stated that success might be a cube rather than a point. If we stay within the cube but miss the point, is that a failure? Probably not! The true definition of failure is when the final results are not what were expected, even though the original expectations may or may not have been reasonable. Sometimes customers, and even internal executives, set performance targets that are totally unrealistic, they may hope to achieve 80 to 90 percent at best. For simplicity’s sake, let us define failure as unmet expectations.

When unmeetable expectations are formed, failure is virtually assured, since we have defined failure as unmet expectations. This is called a planning failure and is the difference between what was planned to be accomplished and what was, in fact, achievable. The second component of failure is poor performance or actual failure. This is the difference between what was achievable and what was actually accomplished.

Perceived failure is the net sum of actual failure and planning failure. Figures below illustrate the components of perceived failure. In Figure below, project management has planned a level of accomplishment (C) lower than what is achievable given project circumstances and resources (D). This is a classic underplanning situation. Actual accomplishment (B), however, was even less than planned.

A slightly different case is illustrated in Figure below. Here, management has planned to accomplish more than can be achieved. Planning failure is again assured even if no actual failure occurs. In both of these situations (overplanning and underplanning), the actual failure is the same, but the perceived failure can vary considerably. 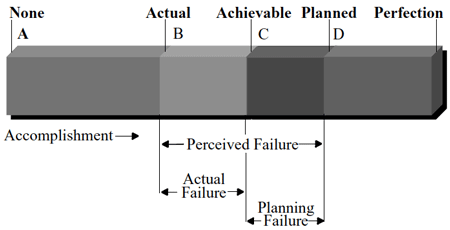 Although these quantitative and qualitative approaches still hold true to some degree, today we believe that the major component of planning failure is inappropriate or inadequate risk management, or having a project management methodology that does not provide any guidance for risk management. Sometimes, the risk management component of failure is not readily identified. For example, look at Figure below. The actual performance delivered by the contractor was significantly less than the customer’s expectations. Is the difference between these two arrows poor technical ability or a combination of technical inability and poor risk management? Today we believe that it is a combination. When a project reaches completion, the company performs a lessons learned review (or at least a well-managed company does). Sometimes lessons learned are inappropriately labeled and thus the true reason for the risk event remains unknown. 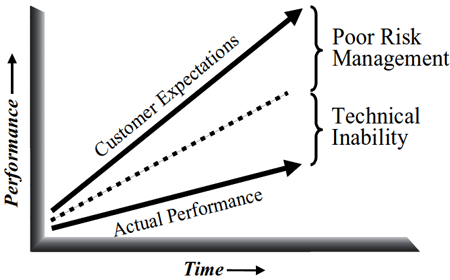 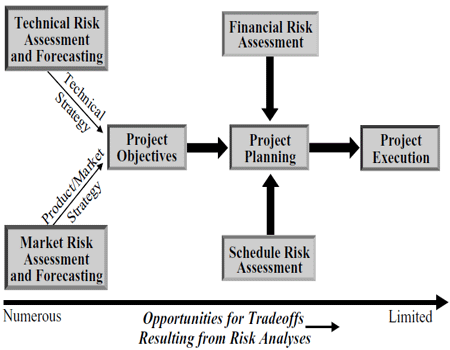 Care must be taken that the proper identification of failure is made and that the company knows to which functional areas the lessons learned should be applied. 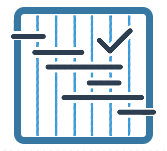