A strategic management process should aim to unleash for the company the benefits which have already been discussed in some detail–better results through better decisions, the identification of more opportunities, the consideration of more factors, improved coordination and communication, strong motivation, and the provision for the company of a means of coping with the pressures of change.

Any total planning process is concerned with plans of differing durations. It will incorporate plans for both the long and the short term. Many planners believe that although the principles which guide the answer are important, the answer itself is nowhere near as vital as the questioners believe. The first principle I would urge is that any plan which looks beyond the time horizons of the annual budget is taking a major step forward: even if the time span first chosen turns out to be wrong for the company, the benefits of moving out in time will more than outweigh the temporary disadvantage of having to adjust the period at the next planning cycle.

If plans were prepared on an absolutely rigid time horizon perhaps it would be more important to get the time right the first time around. In fact most companies work their plans on a ‘rolling’ basis. Every year the first year of the plan drops off and another is added at the end, so that the period provided for is always the three-, five-, ten-, or whatever years’ span for which the company is trying to plan. This method gives the opportunity of regularly revising the plan, so that the company is not trying to follow a rigid path which has been outdated by events. The rolling system gives to planning that degree of flexibility which is essential in a fast-changing world and, as has already been seen, this degree of flexibility may still be inadequate when organisations are operating at the higher levels of environmental turbulence. 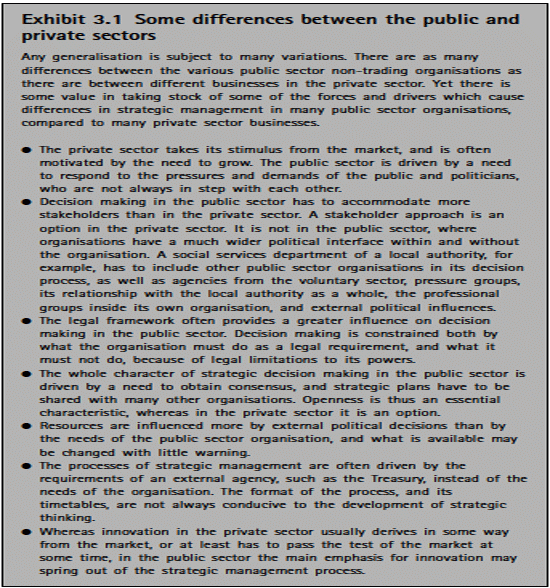 Not all companies use the rolling system. There are some who believe that an x-year plan should last x years and, upon expiry, be replaced by a further plan which will be followed with the same rigidity. A similar approach is often adopted by the national development plans of governments (e.g. the Indian five year plan) and regional development authorities (the twenty-five-year general development plan of Rhodesia’s Sabi-Limpopo Authority). Those interested in the techniques of governmental economic planning will find Kidel’s description of the French fifth plan of value.

There are valid reasons for the differences in approach, as the different types of plans are used for different purposes. A government development plan is not required as part of its process of management in quite the same way that corporate planning is used by business .The type of reactions that governments may make to adverse circumstances have little relation to those open to business. Each company should try to select a planning period which satisfies its particular and unique needs. There may be an identifiable cycle in a business which should be taken into account or some market or other factor which makes one length of time more appropriate than any other.

A business may have activities equivalent to growing mature oaks from acorns, but this does not necessarily dictate a hundred-year plan. A planning period that is too long will mean that none of the present managers will have much interest in it as they do not expect to be around that long. Warren pointed out that division managers seldom stay at the same job for more than five years, and that the average tenure of office is under four years – which by implication means that many move jobs in an even shorter time period. When this is coupled to Pennington’s statement that a planner’s ‘life expectancy’ in a US company is only three and a half years, the extent of the problem of choosing too long a horizon becomes very obvious.There are thus human reasons why too long a period is not practicable for all parts of the organisation. 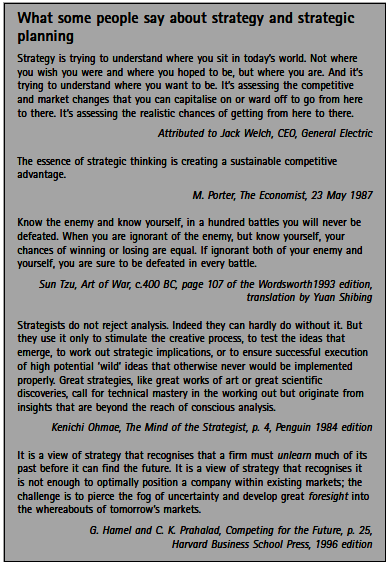 An example of the derivation of policy and procedure from a plan may help to illustrate the relationships.

In any modern business there are hundreds of policies and procedures which must be applied if the organisation is to function at all. Definition provides a measure of uniformity, precision and control, and ensures that they are understood by all those who need to understand them. Where policies and procedures are of a ‘permanent’ nature they may beneficially be enshrined in books of regulations and standing orders. Every company has a host of these permanent areas: think for a moment of the areas of personnel, purchasing, office stationery, and general administration – although in many companies they are often implicitly rather than explicitly defined.

Careful attention to this area is a useful aid to better corporate planning. Often definition of a policy will lead to a recognition that it is incompatible with the plans and needs changing: if it is not defined it may be unknown to the people who would realise that it is inappropriate. The point should not be laboured, for there are no new principles involved, but it is nevertheless worth making. 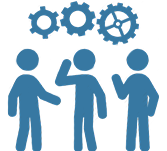