A company grows through its new products: they make it possible to gain a differential in products and services over the competition. They also make it possible to focus advertising on news that will interest the market. Finally, they provide the springboard for a revitalization of strategic image features of the brand. For every launch of a particular innovation, the same question arises from the parents of the project: what shall we call it?

The question of naming new products is important: it is not at all a euphonic problem (does the name sound nice?), but a fundamental one. In reality, the first question should be: do we need to call it anything?

Why, in fact, did 3M give the name ‘Post-It’ to something it could have called ‘removable Scotch tape’? Scotch is 3M’s well-known brand and the name indicates ‘adhesive products’. Isn’t Post-It an innovative variant of Scotch tape? Now a brand – in this case, Scotch – is only supported when it is nourished through innovation.

Let us take another, B2B, example: an innovation by Lafarge. It is a revolutionary, ultra-fast, fine cement that makes it possible to obtain an extremely smooth surface. Should a new name be found for it, with the potential for turning it into a Lafarge product or range brand later, or should it simply be called ‘the new Lafarge ultra-smooth cement’, opting for a descriptive name, as it would be in a masterbrand or umbrella strategy? The name therefore poses the underlying question of the brand strategy (the number of levels and the links between them, between the corporate and the products).

When should you create a sub-brand?

When a new product arrives, there is too great a tendency to opt for the creation of a specific brand. This is understandable; the inventor reacts like any parents who, proud of their child, seek to give it a first name. However, a first name is an identity, and a lasting commitment of a marketing budget in order to forge this identity and achieve recognition for the daughter brand.

Moreover, in practice, by focusing on the so-called daughter brand, there is a tendency to let the parent brand take a step back, into the background, something that is quickly translated into the periodic monitoring studies of brand equity. The parent brand declines in spontaneous recognition and in image.

When, then, should one create a subbrand?

However, it is necessary to account for the competitors’ reaction. Carrefour, noting the success of the major brand’s innovation, would not be slow in launching its copy under its own distributor’s brand: Carrefour milk with guaranteed vitamin content.

By launching its milk with guaranteed vitamin content under the name Viva, underpinned by long-term advertising campaigns, the Candia brand was able to create a halo of exclusivity, of differentiation. Viva not only created the segment: it is its referent. The consumers buy Viva with all its evocations of active good health. It is more than a product; it is a true (daughter) brand.

Which brand architecture is suitable for brand innovation? 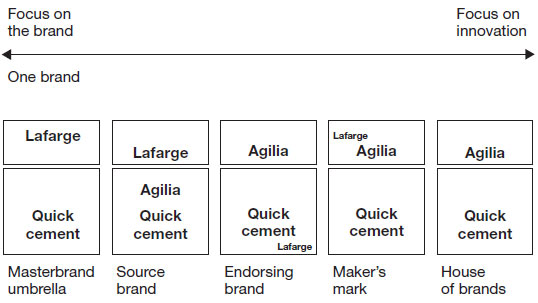 The maternal identity of Nestlé did not legitimate its presence in coffees. Nestlé is historically, and first of all in everyone’s lives, baby milk. It was not possible to launch a ‘Nestlé coffee’. Nescafé made it possible to say both ‘instant, powdered’, giving reassurance through the confidence linked with the name, while distancing the maternal image, and to say ‘coffee’. The word café brought Nestlé an element that it had previously lacked. Conversely, the identity of Philips was already technological: it was enough to endorse the razor. Choosing to call the razors ‘Philishave’ rather than Philips razors brought nothing new: the activity descriptor ‘shave’ did not bring any added value and contributed to distancing the salience of Philips. In fact, Braun simply calls its razors – Braun razors.

Taking into account the tendency to think up a first name too quickly, several warnings should be heeded before launching into the choice of a daughter brand:

A case in point: names in the automobile industry

The car fascinates us. Innumerable reviews and magazines are dedicated to it. This sector only lives through innovation, giving us the desire to change cars. Different constructors have different policies regarding their new models.

Renault gives them all proper names (Vel Satis, Megane, Twingo, Logan and so on). Peugeot follows its three-digit logic with a zero in the middle (which forced the first Porsche known as 901 to become the 911 in order to avoid legal proceedings). Citroen opted at one point for proper brands (Citroen Xsara, Saxo, Xantia) before returning to the initials C1, C2, C3, C4 and so on. With BMW you buy a series number: series 1, 3, 5 or the top-of-the-range 7. What is the logic to these choices?

The first structuring factor of the decision concerns the maker’s status: a generalist or a specialist? Generalists target all segments of the market, all consumers. Since they promote the car for everyone, their image is consequently not as strong as the specialists. As a result, their image is less in a position to dynamise new models, to bring them a strong emotional added value. These are reassuring brands, brands with guarantee and proximity through their network, not desire.

The reverse is true for the specialists, who have segmented their market to a high degree and made their choice. The name alone of the specialist is the stuff of dreams: BMW, Saab, Volvo, Morgan, Mini and so on. According to their means, buyers take away a little or a lot of the dream: the 1 or 3 series, or later on the 5 or 7 series. As with Mercedes, one always buys ‘class’, A, B, C, M, E, S and so on.

There is no dreaming with generalists: it is therefore necessary to boost the model itself with imaginary added value, with emotion. Hence the need for a highly evocative individual name. Remember the Golf Gti! From whom? Volkswagen. In order to compete with Mercedes, Volkswagen concentrates on the Passat, since Volkswagen means ‘people’s car’.

Other parameters, however, come into play. Why, in fact, does Peugeot opt for numbers rather than model names, when it is a generalist? Before we answer this, let us recall that a number can play the part of a brand, like Chanel No 5, or 007, or number 23, the number of the football star David Beckham at Manchester United. Each of these numbers has an emotional potential. Likewise 205 or 911 in cars, through their association with a cult model, the first of which marked an era, the second of which marked several generations of men.

Peugeot’s approach is explained by the specific positioning of the brand: it wants to be ‘the most specialist of the generalists’, as A Saint Geours, its managing director, has said. This is why the brand, although generalist, accentuates its differentiating traits and the radical design that makes it palpable.

As for Citroen’s policy shift, it can be explained as a result of the costs incurred by a daughter brand policy. If a model lasts six years, it is therefore necessary to invest over this time period to give it recognition and an image before turning these into profits and losses. Moreover, Citroen’s objective is to strengthen its image.

The emphasis placed on first-name brands, in addition to being slow and costly, does not rebound strongly onto the parent brand. Hence the decision to group the portfolio of models around Citroen, a single brand. We then buy a variation on the theme according to segment: C1, C2, C3 and so on.