The limits of a certain type of marketing - Strategic Brand Management

This was forged by P&G, the inventors of marketing for mass-consumption products. Traditionally, at P&G the brand is a superior product. Everything begins with the product and hinges upon it. It must prove its worth all alone: brutally, this company only launches mass-consumption products if they can speak up for themselves and ‘make the difference’ in use. Hence the importance of ‘blind test’s in this sector.

In these tests clients must judge the product without seeing the brand, so that they are not biased in their perception by recognition of it. With Pampers, the baby must be drier; Always must absorb better; Ariel must wash better, and the difference must be visible to the naked eye; Sunny Delight, an orange flavoured drink but without real oranges, must taste infinitely better on the tongue, and so on. Note that in its luxury products division (licensed Boss and Lacoste perfumes, etc) P&G uses different rules, since the notion of a ‘superior’ perfume makes very little sense.

In and of itself, the principle that a brand begins with a great product remains a pillar of the great brand. Laughing Cow has an organoleptic quality superior to other soft cheeses. In business to business, Facom mechanic’s keys are the benchmarks in the market.

But the model begins to seize up when it continues ad infinitum: then we reach the zone of diminishing returns. The cost of marginal improvement becomes increasingly high. Making a Michelin tyre safer than it already is involves considerable investments in research and development, which must be absorbed either over very large product runs (hence the notion of a global product) or over smaller, more expensive runs.

This one-dimensional strategy reaches its limits: there comes to be an imbalance between the additional cost of marginal progress, and the customer’s perceived needs. In fact, with traffic jams and rising petrol prices, the majority of car owners use their car in town, for short journeys. Safety remains an essential function of a tyre, but the notion of differentiation on safety loses its market relevance if you continue to seek more and more safety. Moreover, although the higher price is perceptible, the safety increment remains invisible. It is then necessary to change the client benefit.

This product development model still seems to work for certain brands: Gillette is a typical example. After the single-blade close-shave razor came the two-blade razor for an even closer shave, then three blades, then the roller, then vibrating razors. Gillette is a past master in the art of planned obsolescence in its products.

It is no accident that P&G took over Gillette in 2004. These two companies share basically the same product culture, and the same mode of innovation: always more. To achieve this, P&G is now prepared to look beyond its own walls for the innovations of tomorrow: in university laboratories, in start-ups and so on. For the majority of companies, however, the model no longer functions. 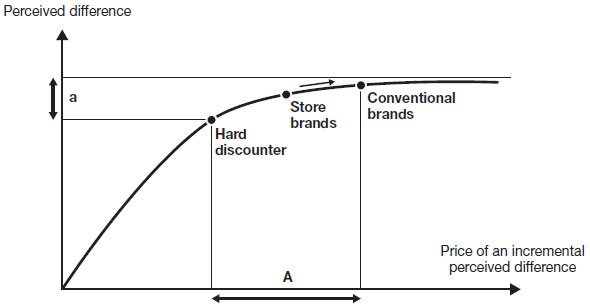 In fact the incremental improvements are no longer perceptible or meaningful; on the other hand, the increase in price is. Consumers can thus make considerable savings (typically 35 per cent) by buying distributor brand products with an equivalent degree of functional satisfaction. The loss in terms of function is minimal compared with the economy achieved.

This reasoning is also true for truck tyres. This is why, although the market share of Michelin Trucks at first tyre mounting is 65 per cent in Europe and the West, it falls by 50 per cent in the second-mounting market, when it comes to replacing the tyres (although Michelin remains the leader). The reasoning is the same in food: what does an even better albacore tuna at Saupiquet mean? Tesco Finest sells indistinguishable albacore tuna. What does an even crustier gherkin from Amora mean? A cul-de-sac has been reached.

The consumer can find comparable and cheaper alternatives, since distributor brands have made up their disadvantage. Consumers have realised this. There is no technological barrier in most mass-consumption goods. Bear in mind that the first explanatory factor of brand sensitivity in the client is the thought, ‘There is a difference.’ Admittedly this is a thought, the client’s belief: it can therefore be influenced by advertising and recognition. Nevertheless, for frequently consumed products, it is modified through use. With experience, consumers see no difference, except for the price. Hence the systematic rise in all European studies of the opinion that ‘distributor brands are a better price/quality choice than major brand’s.

Agreement with this opinion is at 59 per cent in France, 57 per cent in Germany, 55 per cent in Britain, 54 per cent in Italy and so on. This is made easier by the fact that nowadays the majority of large groups supply distributor brands. Some do so openly: the strategy of the Lactalis Group is to dominate the camembert market in two ways; via the President brand itself, and via distributor brand products. Other large industrial companies do the same without admitting it, by delivering to front companies that in turn supply the major distributors.

Since the specifications of the distributors are sometimes highly ambitious, the distributor brand product, although cheaper, can be superior to the brand product. Everyone knows of the case of the famous shoemaker, none of whose own brand products is the equal of the product it makes for Carrefour. In this way, companies reduce the objective distance between branded and unbranded products. Outsourcing to China produces the same result: Chinese factories quickly learn to match Western standards.

The weakness of the idea of ‘best product’ is that it is often defined without taking the customer’s point of view – that is, without considering the use to which it will be put. This is its greatest shortcoming. Take the example of DIY: given that an electric drill will, on average, be used for a few seconds per year in a normal household, what point is there in buying a Bosch-branded one? In functional terms it makes no sense. On the other hand, if the consumer picks a cheaper alternative, the immaterial satisfaction of owning ‘a Bosch’ will be frustrated: this is a key aspect of the strong brand. Bosch enjoys the values associated with its country of origin (Germany), which make the buyer proud.

The brand that has not built in elements of intangible added value (trust, pride, emotion, attachment, or familiarity capital) is copiable and may be damaged by an attack on price. This is what preserves Coca-Cola; despite its contribution to the rise in obesity. Of course it has a great taste, but it is also has massive distribution (a Coke should always be within reach) and a unique intangible capital made up of joie de vivre, youth and friendship, coloured by Americanness.

Fundamentally, at P&G the brand is in fact the name of a superior product. Was the IBM PC superior? Was it the best PC? In the expert’s opinion, no. But it was the best-seller of its era. It was broadly sufficient for the uses it was put to. It also had a unique intangible value that forced the preference in the serious world of business: it was known as ‘IBM’, the company that was considered by all to have founded modern information technology (even if it was Sperry Univac who invented the first computers). The brand suggested a high ‘perceived quality’.