Brand management itself is much influenced by the revolution that has shaken marketing theory and practice: a shift from a mere transactional perspective to a relational perspective. This has led theorists to ask new questions, and propose new working methods, new modes of thinking, new tools, which often claiming to be substitutes for the former ‘old’ ones.

From transaction to relationships

Traditionally marketing focused on consumer behaviour: it aimed at influencing choice. Its focus was on understanding purchase, and the choice criteria that prompted it, whether they were tangible or intangible, product-based or image-based. Its tool for influencing demand was the marketing mix, with its sacred four Ps: product, price, place and publicity. Marketing research aimed at identifying the attributes that predict purchase, and its typical statistical tool was a multi-attribute model.

Segmentation is another key concept of transactional marketing: recognising that transactions are facilitated when expectations are higher, and the mass market has been segmented into groups, or types with similar expectations. Then brands could be profiled and created to meet each set of expectations.

Because competition is fierce, imitation rapid, and consumers sometimes seemed overwhelmed by these very tightly tailored proposals and brands, the focus of marketing has moved from conquering clients to keeping them, from brand capital to customer capital. The new buzz words of good efficient brand management are share of requirements, shared loyalty and CRM.

The focus is on building lasting relationships through time, and on post-purchase activities, all of which is subsumed under the term ‘relationship marketing’. The focus of research has moved from predicting choice to classifying the different types of relationships consumers have with brands (Fournier, 1998), or the different types of interactions companies engage in with their clients, beyond selling a product or service (Rapp and Collins, 1994; Peppers and Rogers, 1993).

It should be noted that relationship marketing is a financially driven concept. Customers are still segmented, but the distinctions are behavioural. In traditional marketing, segmentation is aimed at maximising the value created by the brand or company for its customers. In relationship marketing, segmentation is based on the value a customer brings to the company: only profitable customers should receive repeated attention. Hence the concept of lifelong customer value. Internet technology has created the means to meet this demand for more and more efficiency in tracking, analysing, servicing and selling to each one of these important customers.

Of course, these two approaches are complementary. The best loyalties are not based on mere calculus and loyalty cards: they are internalised as voluntary loyalty, as brand commitment. On the other hand, weak brands need to start somewhere. Behavioural loyalty programmes create the conditions for deepening the customer–brand relationship, and create emotional connections between consumers and the brand.

From purchase to satisfaction and experiential rewards

Another consequence of this shift towards post-purchase phenomena is the focus on product/service satisfaction. How does what the product/service delivers match the expectations of the consumer? How can this satisfaction be raised, improved relentlessly? In this process the conditions of the consumption situation need to be taken into consideration.

A product is always consumed in a context. The nature of this context affects the degree of satisfaction that the customer reports, through the notion of a ‘rewarding experience’. In fact all marketers have known for a long time that food served in a pleasant atmosphere is judged to taste better than food eaten in unpleasant surroundings.

Philip Kotler (1973) has coined the term ‘atmospherics’ to point out this facet of consumption, the experiential facet. Today, stores such as Niketown and the House of Ralph Lauren are typical applications of this experiential concept (Kozinets, 2002). As early as 1982, a pioneering paper by Holbrook and Hirschman insisted on the necessity of providing modern consumers with fantasies, feelings and fun in their experiential consumption. Schmitt (1999) has coined the term ‘experiential marketing’ to refer to ‘how to get customers to sense, feel, think, act and relate to your company and brands’.

Beyond functional and experiential rewards, brands must now also be aspirational. It is through their intangible values that they help consumers to forge their identities, at a time when inherited identities are weaker. The famous and elusive ‘customer bonding’ is based on product satisfaction, on a rewarding consumption experience (which includes the tailoring of proactive services even for products). It cannot exist if the brand values do not fit the consumers’ values. All brands have to be somehow aspirational. Beyond materialistic and hedonistic satisfactions, they say, ‘We understand each other, we share the same values, the same spirit.’ This is why it is so important to specify these non-product-based values. Visions and missions are the typical source of these values.

It is therefore possible to plot the extension of the scope of brand management on a two-dimensional matrix (Figure below). The horizontal axis refers to the time perspective of the relationship sought (from immediate transaction to repeat purchase to long-term commitment), while the vertical axis refers to the depth of customer bonding.

It has three tiers: product satisfaction, experiential enchantment and aspirational intimacy, or the sharing of deep values. At the intercept, it is possible to position the new tools and behaviours of modern brand management.

The importance of communities

How many fans does the Manchester United football team have all around the world? Five million in the UK and 50 million elsewhere in the world? Most of these will never see the team play in the flesh, but they watch realtime television showings or connect to webcasts of the team’s matches on the internet. They consume merchandise such as T-shirts. In the Old Trafford stadium, UK fans drink only Manchester United Cola. This is a real community; thanks to it, the team can hire the most expensive players, such as Wayne Rooney. The income from the merchandise sold by association with the most famous players virtually covers their enormous wages and transfer fees.

The extension of brand management 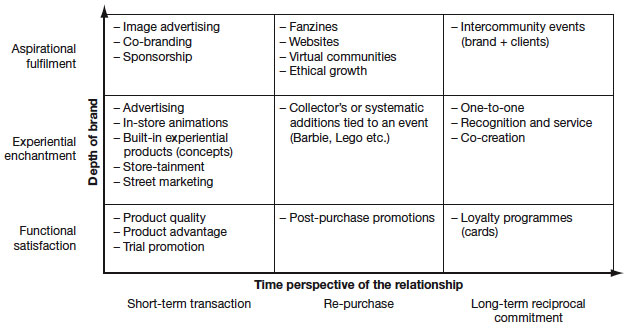 Traditionally, in consumer research consumers were seen as individuals, who were eventually aggregated into market segments. Most multi-attribute models aiming at predicting purchase made that implicit assumption, for they were based on individual responses. One could argue that consumers are not isolated individuals: they belong to groups, tribes or communities, either stable or transient, durable or situational. In fact, the brand acquires meaning not through a summation of individual evaluations, but after a collective screening made of conversations within the reference groups, the community, where opinion leaders can play a determining role.

Along with advertising, new forms of behaviour have emerged through which brands are enacted, that is, they eventually ‘live’ their values with consumer communities in a non-commercial environment. Classical examples of this are the Michelin sponsored races around the world, or the Harley-Davidson rally where management and bikers meet once a year. The modern brand also animates communities created around itself or a topic (parenthood for Pampers, rock music for Jack Daniel’s). Internet sites, ‘fanzines’, hotlines, brand clubs and events, are the classic tools to implement this new attitude and share the brand values through servicing or animations.

The brand becomes ‘mediactive’, it helps its customers get in touch with each other, on the net or in reality through specific events. Building brand communities is now part of the scope of brand management (Hagel, 1999). For consumers, getting together and sharing experiences is another form of reward. Feather (2000) has identified four drivers of e-communities: they can be interest-based, transaction-based, relationship- based or fantasy-based. Each one determines a specific type of site, of content, of interaction between the brand and this very involved public; it goes beyond mere purchasing and looks for interactions with the brand and other customers. The customers are driven by the rewards of community interaction and transaction.

Most of our thinking about the role of advertising in supporting brands is based on the ‘bigbang model’ (Kapferer, 2001). At a time when there were few channels available, the core media could really be called mass media. But attention is scarce and fragmented now, because there is such a diversity of available media channels, not to mention the internet.

The power and energy of the massive gross rating point (GRP) campaigns is fragmented. Down in the marketing channels, this energy arrives weakened. This is why it is necessary to recreate energy at contact. All brands must be concerned with the energisation of their value-transmitting chain, including prescribers, VIPs, opinion leaders, professionals, early triers, involved consumers and of course distributors. A brand that existed only on shelves and on television would seem remote and lack depth. One does not create relationships at a distance.

As a consequence, all brands now must think of their activation plan: