By capitalizing on the brand awareness, the esteem and the qualities attached to an existing brand, the practice of brand extension can help to increase the chances of success of a new product and lower its launch costs. These two alleged consequences have been verified.

As shown in Figure below, only 30 per cent of new brands survive longer than four years, whereas the rate is over 50 per cent for brand extensions.

Rate of success of new brands vs brand extensions (OC&C) 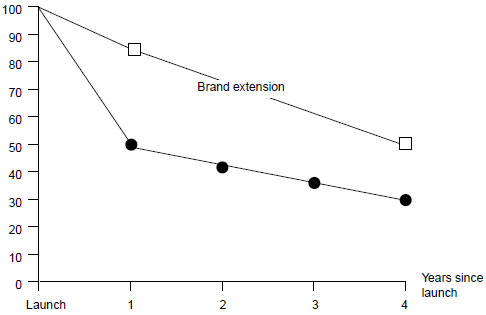 How does extension increase chances of survival? First, distributors themselves will allocate more space to an already well-known brand than to a newcomer. But brand extension also has an impact on the consumer (see Figure below):

As far back as 1969, Claycamp and Liddy had measured the impact of a ‘family name’ (extension) on the trial rate of the new product. Their forecasting model, known as Ayer’s model, rested on a database of 60 launches in 32 categories, half of these being in the food sector. The basic structure of the model is presented in Figure below.

Ayer model: how a family name impacts the sales of a new product 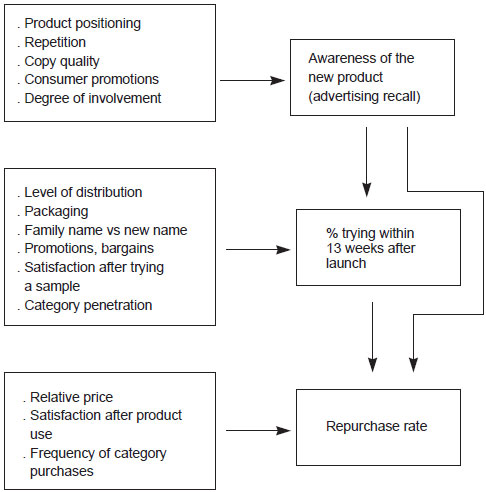 The estimate of the parameters of the model (through double regression) resulted in a very positive weight for the ‘brand extension’ variable. A previously known name directly and strongly induces the consumer to try the product. Moreover, Liddy and Claycamp noted that this variable was not correlated to advertising recall or even to weighted distribution. This last point is surprising: perhaps American distributors do not act as barriers to entry as much as their European colleagues.

What conclusions can be drawn from these studies? It would be wrong to think now that all new products must be launched under a known brand. This would mean forgetting the usefulness of multi-brand portfolios in the maximisation of market coverage. Moreover, as will be discussed later, some brand extensions can hinder the success of a new product, or be detrimental to the brand capital itself.

Thus Hermès refused to lease its name, in exchange for royalties, to the Wagons-Lits Group, which wanted to launch a top-of-range service of individual or package holidays. The service risks of hotels in exotic and far away countries were too high for Hermès to be willing to associate its name with that venture.

These figures also reveal that the consumers’ view of the product is generally far less conservative than that of management launch itself. Quite often the latter is too blinkered by the origin of the brand and considers the manufacturing history of the brand as its definition. For management, Mars could not mean anything else but the chocolate bar.

And yet the Mars ice-cream bar has been a success and the Mars biscuit launched in 2003 was also a hit. This proves that consumers distinguish rather well the brand from the product, or at least that they do not associate them irreversibly.

The second economic argument put forward to justify brand extension has to do with cost: launching a new brand would cost more than launching a new product under a well-known brand.

Indeed, for consumer goods one estimate is that, as a result of lower expenses in ‘push’ and in ‘pull’, in promotion (to consumers and above all to distributors) as well as in media advertising, the savings due to the choice of brand extension amount to 21 per cent. Since the trial ratio is higher, the strategy of brand extension proves economical as far as cost per trial is concerned (see Table below).

However, another study from Nielsen based on 115 launches gives apparently contradictory results: the new products launched under new names get market shares twice as high as those of the products launched under known brands (except for health and beauty products, for which the results are identical: 2.7 per cent vs 2.6 per cent) (see Figure below).

The reason for this difference can be seen in the second column. The extension strategy would not in fact be less efficient: the lower market shares are due to the fact that management uses smaller communication budgets in cases of brand extension, which lowers the share of advertising presence. 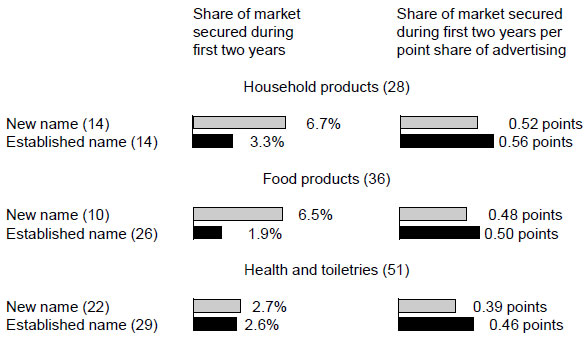 For an equal percentage of advertising presence, brand extension results in equivalent or even greater market shares in the field of health and beauty where, the risk perceived by the consumers being higher, there is a preference for known brands.

What can be deduced from these two studies? Are they contradictory? The first one concludes that extension is more efficient even with a lower budget. The contradiction could be solved by considering the fact that many managers, confident in the productivity of brand extension, reduce the advertising budget dedicated to the extension launch (thus the results of the first column of Figure above).

For equal budgets, the extension strategy has a slight advantage which is not significant in the cleaning products and food sectors but significant in the health and beauty sector (0.46 vs 0.39). In addition, the fact that OC&C analyses efficiency in terms of trial rate (very tightly linked to the familiarity of the brand name) whereas Nielsen’s is based on market share over 24 months, which reflects the marketing mix and product quality as a whole, may have some bearing.

A hidden factor in each of these two studies is the moment of entry on the market. A risky, new market cannot be approached in the same way as the same market at a more mature stage. Sullivan’s (1991) analysis of 96 launches in eleven categories of products gives interesting descriptive results (see Table below).

Sullivan also noted that the brands which used their own names in order to penetrate a young market were rather weak brands. For example, in the United States, Royal Crown Cola was the first brand to penetrate the diet cola segment under its own name. It was followed by Pepsi-Cola with Diet Pepsi. Coca-Cola had preferred to launch Tab and not to put its brand capital at risk. It introduced Diet Coke last. The survey shows that the brands which have become leaders in these markets were almost always new brands (Diet Coke is an exception).

Why do strong brands hesitate to penetrate young markets? Of course, they would benefit from the fact that there is no competition yet. But creating a market entails more risks for the creator (Schnaars, 1995) and a negative effect on the brand and its capital. In a young, badly defined market, a brand must be flexible in order to find the best positioning. Brand extension does not permit such flexibility. The attributes of the brand must be respected.

Furthermore, launching a brand which is specific to a new market enables the brand to become the reference on that market, by benefiting from what is called the pioneer advantage (Carpenter and Nakamoto, 1990). Finally, many new markets are created in reaction to old ones. For example, the snow surfing market is a counterculture against alpine skiing and its competition-oriented values; its proponents have their own brands and have refused the surfboards of Rossignol, the established brand.

Apart from the case of weak brands trying to dominate a new market, it can be attractive to be the only known and reassuring reference on a market where neither the offer nor distribution is structured, and where the consumer perceives a high risk. The consumer will appreciate the presence of a famous brand, even if it is far from its original market. Only its fame and serious reputation count. That is why Tefal penetrated the fledgling market of domestic appliances under its own name.

Finally, the analysis of success rates of the two launch strategies, depending on the degree of maturity of the markets, reveals a slight advantage for the new brand strategy in the market creation phase. But with time, the brand extension strategy seems more successful (see Table below). 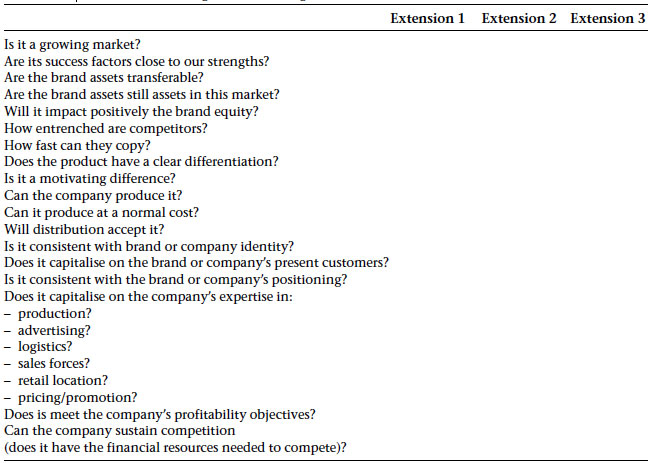