Not all brands lend themselves to extension. Some brands are defined only through their prototypical product or know-how. This is the case with cosmetic brands such as Clarins, Roc and Vichy. Their field of extension has to be limited within appropriate boundaries which combine both science and beauty.

Other brands are almost like sects and have quasi-religious principles: St Michael, the brand owned by Marks & Spencer, covers everything from food to clothes, from toys to para-pharmaceutical products and furnishing. Through its signature it imparts legitimacy to all that is in conformity with the Marks & Spencer ideology. Like a patron saint (etymologically, patron means pattern, ie model to be followed), the brand transforms and elevates all the products that it sanctifies.

If the brand is to remain intact in the eyes of the consumer and not be fragmented into disconnected units, the prerequisites of a remote extension must be taken into consideration. For the extension of one brand into various remote categories to look coherent, one has to draw upon the deeper meaning of the brand.

This supposes that the brand either has such meaning or has the potential to acquire it. The Swiss brand, Caran d’Ache, built its reputation through upmarket pencils and writing tools. Its extension into scarves, wallets and leather items failed. The brand was missing the necessary deep meaning.

Figure below demonstrates the demands arising out of brand extension. Every degree of product dissimilarity changes the meaning and the status of the brand. Close extensions (B) are compatible with product or know-how brands: Heinz can market not only ketchup, but also mustard sauce.

Extension one degree further (C) corresponds to brand benefits: Palmolive softens all that it embraces and Bic simplifies everything from pens to razors to lighters, making them disposable and cheap. A further extension (D), in order to be coherent with the initial product (A), assumes a brand defined by its personality.

In the beginning, Sony was a brand exclusively for hi-fi systems. But in a few years it has acquired fame in the field of television sets and videos and has therefore modified its image and its significance, but its core values still remain technology, precision and innovation with a specific elegant and refined personality. The last extension (E) assumes a brand that is defined by deep values. Virgin is a good example.

Type of brand and ability to extend further 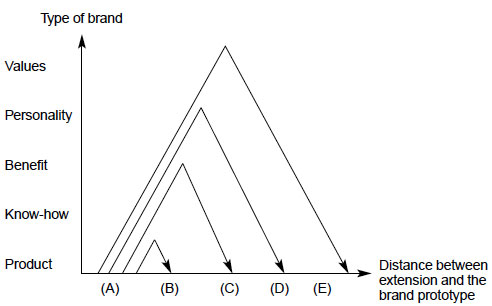 Thus, the only way for a brand to give a single meaning to a collection of extensions is to regard them from a higher viewpoint. To make distant extensions fit, the brand has to distance itself physically and serve more as a source of inspiration and a value system that can embed itself in different products.

This is the case with Nestlé, a brand with a very large spectrum of offers. The distance helps to maintain the angle between the brand and its capacity to lend itself to different products. The steeper the angle, the greater force it exerts on the products (from A to E). The flatter this angle, the less is the force available to the brand to unify the products. Like an overstretched rubber band, the brand becomes weak, loses its grip and finally breaks.

More concretely, brands having only a physical facet (a product, a recipe) and no intangible identity do not lend themselves to remote extensions. They become diluted and are no more than numbers. This is the case with Mitsubishi. It no longer operates as a unifying brand but is only a corporate name and a factory trademark.

It carries no signification other than the generic characteristics of Japanese technology and the image of industrial power that is associated with the group. Mitsubishi cars do not seem to embody any particular ideal and neither do Mitsubishi televisions or tools. This was also the case with Philips to a certain extent.

At the other end of the spectrum are the underexploited brands. These cover a very narrow product field but have an inner meaning which makes them legitimate over a large range of products. The brand Dole was a typical example of under-exploitation. This brand underestimated its growth potential for a long time.

Management considered the brand as a product and confined it to pineapple juice. But for consumers, Dole signified much more. Beyond its attributes (good taste, freshness and naturalness), lay a deeper core: sunshine. Dole was actually the sunshine brand and in this capacity could cover not only other fruit juices, but other products, eg ice creams.

Very well known for a long time as a shoe brand, Salvatore Ferragamo has now successfully diversified into ladies’ handbags, cardigans and ties. As shown in Figure above, the further a brand wants to move from its origins, the more it needs to have acquired a relevant intangible meaning.

Interestingly, it took less time to evaluate the farthest extension’s coherence with the brand when that extension was seen at the end of the ordered sequence (4 seconds vs 4.34). Actually, the ordered sequence had itself modified the meaning of the brand, making it clear that it was not a product brand but a larger brand with a wider territory.

Again, a real-world illustration of this process is that of McCain. This brand entered the market with its frozen fries. After two years, it moved to large American pizzas, then to buns and recently to the fast-growing iced tea market. The meaning of McCain is now clear: American food, simple products, generous portions, fun to eat and innovative in their category. This brand territory will determine McCain’s future extensions.