Some might be surprised to hear talk of pharmaceutical brands, since the role of a drug’constituents, and therefore of the intimate link of the active ingredients with the success of the drug, seems to defy any other element. Nevertheless, doctors do not prescribe products, but brands, where the generic product is not available. Science comes to us not in the form of the international scientific denomination of the chemical compound, but in the form of its brand name: Zantac, Stagnant, Clamoxyl, Prozac, Viagra and so on, not to mention medicines sold without prescription, which fall under classic marketing (Malox, Aspro, Doliprane and so on).

The medical environment is characterized by several factors that outline how and why‘brand building’ is specific to it:

Public authorities, however, tend to oppose these man oeuvres, because the pressure on public health finances demands drastic savings.We should also note that certain countries, such as Thailand in February 2007, have decided to bypass intellectual property rights by authorizing the manufacturing and storing of generic forms of two famous anti-AIDS drugs, while they are still under patent protection.

The That government invokes the argument of protecting its population: these two drugs are too expensive and therefore not accessible. AIDS is causing devastation in Thailand. Note that France did the same when it was a question of building stocks to protect the French population against the risk of anthrax, in the case of a chemical terrorist attack.

Case study: How branding affects medical prescription Brands create value both for the company and to those that decide to use them. This is done by a dual quest of differentiation on tangible dimensions but also on intangible dimensions.This quest is often not simultaneous: most brands start as the mere name of product innovation.

Once they achieve success, they are copied and the intangible dimension created by the communication of brand identity creates a form of protection: products may be similar but consumers choose one brand instead of another. This is the effect of habit, of proximity, of leadership and pioneering aura, and essentially of the need for reassurance. However, protections do not last: there is a need to recreate a material differentiation by innovation that delivers tangible benefits through improved products or services.

Very few sectors demonstrate the value of branding as much as the pharmaceutical sector. This sector is dominated by the ideology of progress through science. Those prescribing drugs are rational and make what they perceive as the best choice for the patient. Normally this should imply product-driven market, in which brands are forbidden word.

Recent research has shown however that medicines have a personality, as do all brands.By ‘personality’ we mean that both generalist doctors and specialists find it possible to attribute human personality traits to medicines.Not only did they not refuse to answer questions about brand personality, but statistical data analysis showed that some of the personality traits they ascribed to drugs were correlated with prescription levels (Kapferer, 1998).

When looking at Table below, you will see that the anti-ulcer medicines that are most prescribed are described as more ‘dynamic’and ‘close’ than other forms of medication. Product, an active ingredient cannot be dynamic or close; a brand can. Thus brands of drugs do have a mental existence and influence in the minds of the prescribes. 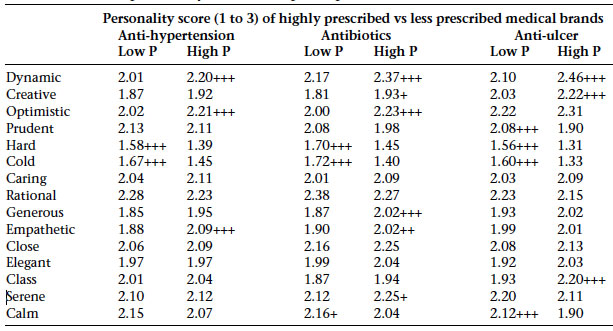 Interestingly too, Table below shows that although they recognized the products themselves as being totally identical and saw two brands as fully similar in the functional benefits they delivered, respondents prescribed one three times more frequently than the other. However the chosen one was endowed with significantly more ‘status’ than the less chosen one.

Status is an intangible dimension created by impressions of leadership)of presence, of proximity to the doctors, of intensity of communication. It is created by marketing once the drug has been developed. Once created, this serves as competitive edge against ‘me-too’ products, at least before a new drug replaces the existing one as market leader.

This example illustrates the fact that evening the high-tech sector, brands are a psychological reality, which operate even in the context of rational decision makers who are disposed to make optimal rational decisions. Choice is always a risk: products increase the range of choice, and thus of perceived risk. Brands make choice easier by reducing the likelihood of choosing alternatives to the market leader.

The choice of the English word ‘likelihood’here is interesting because it implies both statistical concept (probability) and the mediating process by which alternatives are being more chosen (they are more ‘likeable’).Branding is thus a consumer-oriented response to the problem of decision making in opaque and dense choice environments. Brand spontaneous awareness and positioning(linking to a need) are short cuts that are very helpful for decision making. Brands do create a decisional bias: as such they facilitate choice and reduce perceived risk(Kapferer and Laurent, 1988).

The brand influence in medical prescription 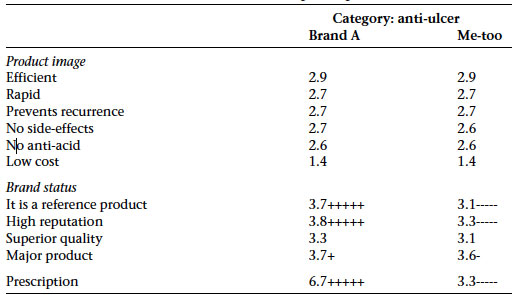 These examples illustrate the relationship between the product and the brand: there is natural interaction between them. Brand mission determines what products or services should be created. These innovative products endowed with a value-adding identity create attractiveness, and encourage trials, repeat sales and loyalty despite incoming copies and low-cost alternatives.

However, new disruptive innovations may shift clients’ value curves, hence change their preferences. This means that the brand cannot be defended only through intangible values: even the much admired Jaguar brand went broke and had to be bought by Ford to enable it to regain the capacity to make high-quality and high-tech cars for today’s exacting new affluent consumers.

Prescription therefore typically follows a ‘two-steps flow of influence’ model. Communication with leaders creates status and reputation, which then makes it necessary for people to be informed about this brand that everyone is talking about: familiarity with the product follows this desire created by its reputation. (Figure below)

How brands impact on medical prescription 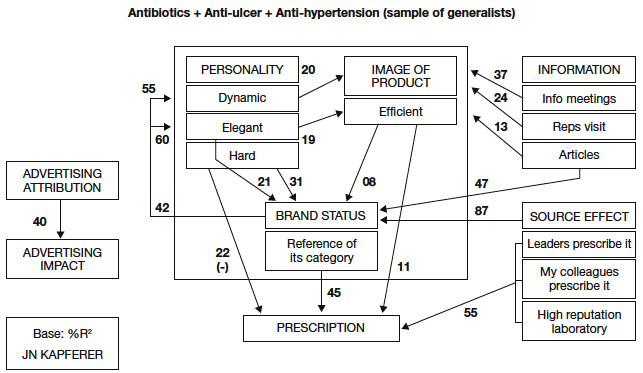 Tomorrow, for certain chronic illnesses, it will be even easier to carry out direct to consumer (DTC) information advertising, mentioning the laboratory and the active ingredients of the drug, but not the brand.

Today, the role of the internet in the dissemination of information to patients, who know more on the subject than their general practitioners do, and interrogate them about the new brands and compounds, is being measured. When updating this research, the patient’s own point of view should be included as a new lever in medical prescription.

Thanks to the internet, patients arrive at their doctor’s office already well informed: they have heard about this treatment or that drug on a blog, a forum, awebsite, in a women’s magazine and so on. Doctors need to generate loyalty among their clientele and are reluctant to act against the patient’s wishes, even if they can. For chronic illnesses, the patient’s feelings on the unpleasantness of the treatment also play apart. Price should also be integrated as a new lever: in fact, the preoccupation with reducing health expenditure is now shared by doctors themselves.

Becoming aware of the intangible

The research outlined above shows that the intangible factor is also present in medical brands, and in this they are brands in the fullest sense. Big brands inspire confidence, and have an attractive personality. However, big brands sometimes possess an intangible dimension that escapes the laboratory, in both senses of the word: due to its rationalist culture, it is not aware of it, and also it doe snot control it.

Prozac is a major brand. Its reputation ha sin many ways transcended the context of medical environment. In fact, more than simply a drug, it is a cultural revolution. By launching Prozac, Lilly did more than launch new anti-depressant: without knowing it, it overturned Judeo-Christian ideology. Could it be that man was no longer born to suffer?

Prozac owes its diffusion to the fact that it is now possible, even apart from genuine depression, to smooth over emotional traumas (divorce, relationship breakdown and so on). It now seems that forces in the service of this ideology have chosen it as a target. Those sects that exploit the fragility of individual sin distress to recruit members have even attacked this drug by any means possible. Clearly, it is the intangible factor that drives the emotion.

In a second piece of research, we investigated the importance of the laboratory’s own image in medical prescription. Of course the characteristics of the brand-name drug outweigh everything else, as they should, but the image traits of the laboratory appear in fifth place, in particular the laboratory’s perceived competence in the field, and its ability to hear and respond to information from doctors (highly reactive services and call centers, consultation, the type of medical delegates, and soon) is also significant. They wish to know ‘the brand behind the brand’. This means that in the worldwide launch of a new drug, it is first necessary to establish confidence in the laboratory itself among opinion leaders adversaries, country by country.