Brands should always be ‘good news’. A brand is the name that progress takes to gain access to the market. The progress marked by the inclusion of enzymes in detergents is called Ariel or Skip or Tide. The progress in convenience coffee is called Nescafé. But progress does not stop.

The latest level of quality or performance is quickly integrated by the market and becomes a standard. Before long it can be found in DOBs. Continuous, but from now on selective, innovation is the brand’s fate. This also applies to products with a strong intangible added value: the cologne brand Eau Jeune (literally Young Water) can only survive if it launches new versions capable on each occasion of moving with the times.

This applies just as much to stylish brands and to fashion designers as to luxury brands that have to renew constantly not their art but their products. Luxury must move with the times lest it become embalmed.

The exceptional longevity and leadership of Nescafé on the market can only thus be explained. Created in 1945, the brand has never stopped innovating, either by little imperceptible touches which when put together have produced an instant coffee whose taste is ever improving, or by major technological breakthroughs which helped recapture some of the 900 aromas that build a ‘coffee taste’.

The product has never stopped developing either in taste or in convenience (glass packaging replaced iron in 1962), or in its ecological considerations (the introduction of refills), or by its look. To signal the technical breakthrough and the progress made by lyophilisation, Nescafé took on the aspect of small grains under the name ‘Special Filter’. In 1981, more aromas were recaptured, which was signalled by the creation of a real product range (Alta Rica, Cap Colombie), and new advertising focusing on South America.

Later, a new manufacturing process called ‘full aroma’ was able to capture even better the aroma of freshly roasted coffee. Innovation and advertising are the two pillars of the longlasting success of this brand. This incremental process never ends. The leadership of Gillette follows the same pattern. Thirty-seven per cent of the sales of this multinational are accounted for by products that have been launched in the five previous years.

In launching new products when the previous ones are barely established, Gillette keeps ahead of the pack, justifying a comfortable price premium and putting DOBs on short allowance (18 per cent volume on the disposables segment alone). Figure below demonstrates this well: there is a strict linear relationship between the innovation rate in a product category and the penetration of DOBs. When brands get lazy, cheaper copies can take a share of the market. It is significant that each year in the Lego catalogue out of 250 product references, 80 are new. In many sectors, the minute the innovation rate of a company goes down, it starts losing ground.

Innovation: the key to competitiveness 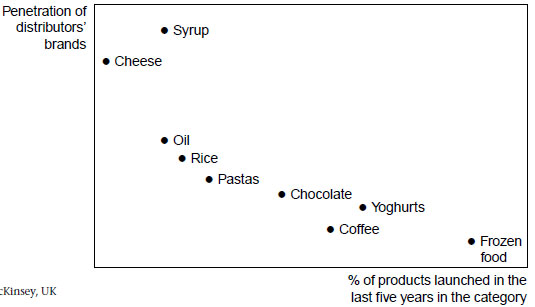 With their massive presence in distribution and daily presence on the table or in commercials, brands have become familiar, friendly and close, a source of empathy, even of loyalty and attachment. To maintain the strength of brands, it is vital to nourish the two pillars which make the relationship with the brand: one cognitive, the other emotional. Innovation serves precisely this purpose. It enables the brand to differentiate itself objectively and to draw once again the market’s attention.

With time, it is noticeable that perceived differences erode faster than the emotional relationship. The liking persists even though we can see that the brand no longer has a monopoly over performance. A study conducted by the American agency, Young & Rubicam, is a reminder of this psychological fact.

The survey, called Brand Asset Monitor and conducted on 2,000 brands worldwide, situates them against two facets of their relationship: cognitive and emotional (bearing in mind the fact that during the growth of the brand, the first facet precedes the second).

The customer learns through communication and distribution the existence of a brand before grasping its difference, which then leads to its pertinence. In the meantime, the seeds of familiarity and esteem have been own, reminding us that prompted brand awareness precedes spontaneous awareness and that the latter is correlated with the emotional evaluation. The brands that come to mind spontaneously, as they belong to this group, also happen to be our favourite brands.

As shown by Figure below, the decline of a brand, however, begins with a slide in the level of perceived difference between it and the competition and, in particular, with the opinion leaders of the product category. The esteem and the emotional ties are still alive and well, but the consumer realises that the quality gap has been bridged between the brand and its competition. He still likes it but may now become disloyal!

Paths of brand growth and decline 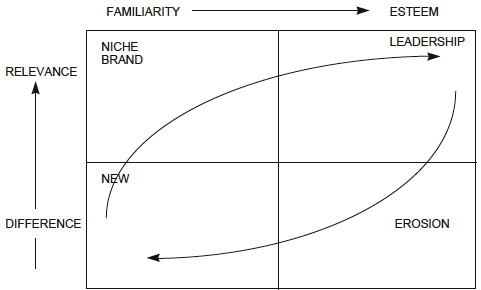 The benefit of this study is to underscore that the drop in differentiation signals the beginning of the decline, however strong the liking score may be. Unfortunately, many leaders are no longer considered as the qualitative reference of their branch. We like Lotus, Kleenex, brands that we have known since childhood, but we no longer think that they are the sign of superior product quality. They will have to refocus on the product to regain their leadership.

The Coke vs Pepsi duel in the United States is a good example of this. One often reduces the struggle between the two giants to a battle of advertising budget size. Actually, Coca-Cola’s philosophy lies in the so-called 3A principle: Availability, Affordability and Awareness. Coca-Cola must be within reach everywhere, cheap and on one’s mind. Another phrase sums up Coca-Cola’s ambitions: ‘To be the best, cheapest soft drink in the world’ (Pendergrast, 1993).

What is exactly the strategy deployed by Pepsi-Cola? As it could not compete in the communication, sponsoring, animation and promotion race it focused on product and price. Pepsi-Cola has always tried to improve its taste to fit as best it could the evolution in the taste of the American public. This is what founded the very aggressive advertising campaigns from 1975 onwards, such as the ‘Take the Pepsi challenge’, where surprised customers found they preferred the taste of Pepsi in a blind test.

Moreover, Pepsi has always sought to be a couple of cents cheaper than Coca-Cola. The strategy proved effective: we know it forced Coca-Cola to change its formula in 1985 so as not to take the risk of being surpassed in taste. This was the famous episode concerning New Coke. How do you preserve the superior image of a brand, this capital of perceived difference?

Jacob’s Creek is a good example of this. Over 20 years, from 1984 to 2004, the UK became a wine-drinking country. Consumption per capita was raised from a low 7 litres per person per year to more than 21 litres. This was the result, as ever, of three converging forces:

New drinkers are fast learners. Thanks to the magic of wine, they want to flex their newly acquired wine appreciation muscles and explore the category. Soon they wanted to discard their former simplistic brands in search of new experiences. This consumer maturity was soon perceived as a potential threat by Jacob’s Creek, which it met by introducing gradual line extensions.

A permanently renewed top range of special limited series was designed to keep up with opinion leaders’ expectations (Parker’s wine guide, wine buffs, restaurants), and a number of subbrands based on more complex grape varietals were designed to keep customers and at the same time demonstrate the competence of the brand, as a true leader should. Jacob’s Creek extended its line upwards: prices in 2004 ranged from a basic £4.59 to £6.99 for sparkling wine and even £8.99 for a rare reserve Shiraz.

In the banking sector, credit cards are constantly launching extensions to satisfy a customer base which, over time, is becoming more affluent and expects increasingly high performance service and insurance products. After Visa came Visa Premier, followed by Visa Infinite. With their very low cost but high perceived value, innovations generate revenue for the entire chain, starting with the broker and continuing to the bank which promotes the product to certain segments of its clientèle, thus increasing the profitability of each customer.

In addition, it produces a feeling of exclusivity among carriers of the most expensive cards, a feeling which is destroyed by the spread of so-called ‘standard’ cards. This is the typical American Express strategy.