How soon after an acquisition should transfer take place? - Strategic Brand Management

There are two paths to growth: organic, internal growth, or the acquisition of brands and products from elsewhere. Companies are increasingly coming to rely on external growth. In fact, we are used to hearing that one company has bought another: Google buys YouTube or MySpace.

In industrial electrical equipment, Hager grows in Europe through buying out local leaders (such as Ashley and Klik in the United Kingdom) – leaders that have market share, reputation, a loyal client base and the respect of distributors. The question then arises of whether these brand names, with their reputations at the local or technical specialist level, should be retained.

The question of architecture immediately arises for innovations stemming from external growth. Can the acquiring company impose its name from the start, without losing customers – in both senses of the word ‘lose’? For example, Philips bought the Sonicare company (no relation to Sony), a specialist in oral hygiene the world over. Sonicare sold an innovative product under its name, a revolutionary electric toothbrush, which had become the reference among dentists.

What should this innovation be called once it had entered the Philips fold, and what brand(s) should it have? Sonicare has a good reputation in the United States and Japan, but less so in Europe. The reverse is true for Philips. Should it then follow the same architecture, in accordance with the dogma of globalisation? Or should it adapt to the markets?

Fundamentally, three phases of the decision process can be identified:

For example, Philips allied itself with the Dutch coffee giant Douwe Egberts to create Senseo, a coffee-maker that makes the best coffee at home, without having to pay the high prices for Nespresso. Note that in the latter case, Nestlé appears to have retained mastery over the project, since the daughter brand is a variation on the word Nestlé, combined with the generic word espresso, whereas the coffee maker is made by Krups, part of the Seb group.

In truth, Gillette is a masculine brand – some might even say macho. ‘Masculine perfection’ is the brand’s international slogan. This image profile is hardly likely to generate value among the majority of women. They insist on maintaining their self-concept – even though there are genuine advantages to the product. Gillette remained pragmatic and discreet, and emphasised Venus, a reassuring hymn to femininity. This example shows clearly how the choice of a name arises from the choice of an architecture. The product is indeed Venus – by Gillette.

Depending on the gap that exists between the brand’s current profile and the expectations of the target of the innovation in question, different architectures will be selected. The more the image is a handicap, the more likely it is that reduced visibility will be selected (maker’s mark architecture). Otherwise, it is possible to go as far as dual branding architecture, or source branding. 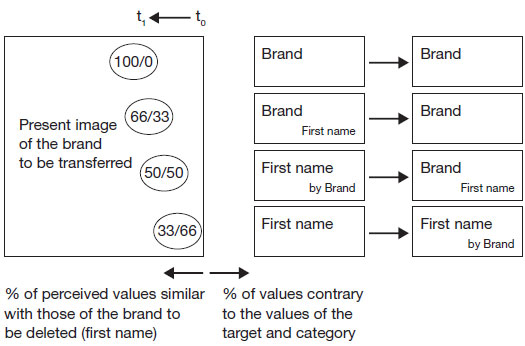 If everyone is in agreement with the final objective of a brand transfer, the timetable and the phases of the operation are crucial. As the schema shows, as the brand becomes more coherent with the market’s expectations, under the effects of communication and time, the brand can take greater visibility on the product and move from a discreet endorsement or maker’s mark to that of the unique source or masterbrand in the final phase.

The decision-making tree is based on the image diagnosis among the targeted clients – whether and how much the overall brand (later to become the only brand) is in step with the specific category expectations in the country in question. If it is already at 100 per cent, then a rapid brand change is desirable.

If it is low, then the image of the generalist brand risks causing offence and damaging the product’s sales, making the competing sales forces’ job easier. This is typically the case during the takeover by a generalist of a highly specialised brand, fetishised by a particular segment,. It is important to not forget the final objective (to finally arrive at a single name), but to proceed in stages.

We have sketched out the stages to indicate the different phases to be followed in the graphical relationship between the product brand and the global brand. Through the different stages, an evolution of perception occurs, bringing the global brand’s image closer to the expectations of the category’s or segment’s customers in the country, or the segment in question.

This makes it possible to move to the final stage, above. This process should be undertaken at a regional level: even for global brands, business is always local. Therefore, these progressive transfers should be implemented along a local timetable, determined according to the local image diagnostic.