Products that have two creators, and advertise the fact through double branding, are on the increase: for example Inneov by Nestlé and l’Oréal, the first nutritional pill to prevent hair loss, launched in pharmacies in November 2006. We are already familiar with Danao, by Danone and Minute Maid. Philips created a revolution with its Coolskin razor with a moisturising cream, entrusted to Nivea worldwide – a fact that appears on all the razor’s packaging, and in advertising. Everyone knows the ‘Intel Inside’ signature that appears on all computers that use Intel, and in their advertising.

The rise of co-branding is symptomatic of our era, with its culture of networking and partnerships. It is also the result of a desire to remain within the company’s key competences, to the point of looking elsewhere for those competences that are missing. It therefore merits an in-depth discussion.

Why this rise in co-branding?

Co-branding is fundamentally a response to the need for continual growth. However, whereas yesterday companies would have sought at any price to acquire the new competences that were missing and restricting their ability to innovate, today they seek to find a partner with which to co-create. This is the era of alliances, partnerships and the networked economy, where each party retains its specialization and its key competence, and utilizes those of others to the fullest extent. In the pursuit of growth, it is not long before we encounter the difficulty in reconciling this with maintaining the brand’s specificity and the company’s expertise.

In the West, the brand is the name for a specific expertise or state of mind (in Asia, the brand is far less specialised). When trying to grow, the brand can reach the limits of its own identity and its specificity: it therefore has need of an ally to fill the gaps where it is not competent or legitimate. When this ally is competent but not legitimate, the partnership does not give rise to co-branding. For example, Weight Watchers needed the industrial and distribution competences of Fleury Michon in order to develop a genuinely qualitative range of vacuum-packed ready meals.

However, this was not mentioned anywhere on the packaging. In fact, not only is the Weight Watchers brand sufficient for diet disciples, its ‘marriage’ with Fleury Michon, the epicure’s brand, suggestive of French-style good living, is unclear and even contradictory.
In contrast, when the two images complement one another, both brands strongly endorse it. Thus, in order to please the youth of today, increasingly seduced by computer games and consoles, Lego decided to add an electronics line to its products.

However Lego not only has no industrial competence in this field (which can always be subcontracted), crucially its brand image would not lend credibility to the new products. The signature of a brand with a strong reputation in electronics among young people would remove this obstacle. Mattel had already worked with Compaq to create a line of interactive, high-tech toys.

We can see therefore that several strategic questions arise on the subject of co-branding:

Typical situations that lead to cobranding

For the distributor Decathlon, which creates its own brands, co-brands are strategically valuable since they boost the perceived technicality of the products of its passion brands, which are still relatively unknown to the end customer. All of Damart’s structure and profitability is based on an ingredient brand, Thermolactyl. This brand, which is owned by Damart, designates a generic fibre that retains heat (rhovilon): this gives Damart the appearance of exclusivity. While many other distributors offer warm underwear, only Damart has Thermolactyl!

In this first phase, the Orange brand name disappears: customers believe they are buying their internet services from Carrefour. It may also propose an association with those brands that already have a captive audience, and offer specific value-added content aimed at this audience. For example, loyal customers of Fnac (a rival of Virgin Megastores) can buy Fnac telephone packages: these clearly show the Orange logo. They offer more than just a price – that is, services and contents aimed solely at Fnac customers. Orange reassures them, and manages the whole business.

Orange does likewise with football clubs, creating subscriptions in the club’s name, associated with Orange’s: fans benefit from ad hoc content, with a strong football focus. When their club wins, they also win promotions, the opportunity to send free SMSs, or to ‘chat’ with the star players. Orange has also negotiated exclusive mobile phone retransmission rights for certain major competitions. In this way, Orange has succeeded in adapting to market fragmentation.

On the internet, co-branding also has a role to play. This is normal: online brands reference one another, in order to mark a community of values, interests and audiences.

An analysis of company strategies since 1990 saw certain forms of behaviour, such as alliances, undergo considerable growth, and even saw new, hybrid forms emerge – hence the creation of new concepts and terms to capture them. One of these is ‘coopetition’ – an alliance with a competitor.

Before we proceed, let us give some definitions. An alliance is indeed a strategic decision, with long-term implications, aiming to bring together complementary competences in order to develop innovative processes and products/services, and finally new markets. It is therefore distinct from a simple partnership, which is limited both in time and in the scope of the cooperation. As for the neologism ‘coopetition’, it refers to alliances involving two mutually competitive companies.

Thus it is coopetition when PSA and Toyota create a common manufacturing unit together in Slovenia, to produce the same small car model. It is a partnership when PSA carries out various cooperation and exchange projects with Ford on diesel engines. It is also a partnership when, in order to exist in this gigantic country, Evian entrusts its US distribution to Coca-Cola. It is apparent that this agreement may be called into question at any time. It is also a partnership when Nestlé entrusts Krups with the European development of a coffee maker that uses Nespresso, the famous and vastly expensive top-of-therange coffee capsules. Tomorrow, or in another part of the world, Krups could be replaced by another famous brand.

Alliances are nothing new. Think back to Ariane, Airbus and Concorde – all projects on such a scale that even at the planning stage nationalism, competition and sensitivities had to be forgotten in order to fuse cuttingedge competences in a meta project that no single company, or even single country, could achieve alone.

In strategic terms, an alliance is an alternative to acquisition and fusion. This latter is a common type of company growth, buying out key competences or market shares through the sacrosanct critical mass. All of the following companies are the result of fusions or acquisitions: Novartis, Aventis, Vinci, Vivendi, Aviva, Arcelor, Entenial and Sony- Ericsson. An analysis of the components of the success or – as it is admitted nowadays – lack of success of fusions and acquisitions between companies is not relevant to this section. As for the alliance, it preserves the cultures, identities and legal forms of the companies that come together in a common, large-scale project.

In terms of visibility, the members of alliances are not always clearly identified. This is the case when a new name and often a new collectively managed structure are created for the project in question: Airbus Industries, Eurocopter, Thalys, Eurostar or Arianespace. However, it is sometimes the case that the parents are clearly identified by their names and logos. In fact, many products are clearly endorsed by both creators: Philips Alessi, Samsung B&O and so on. 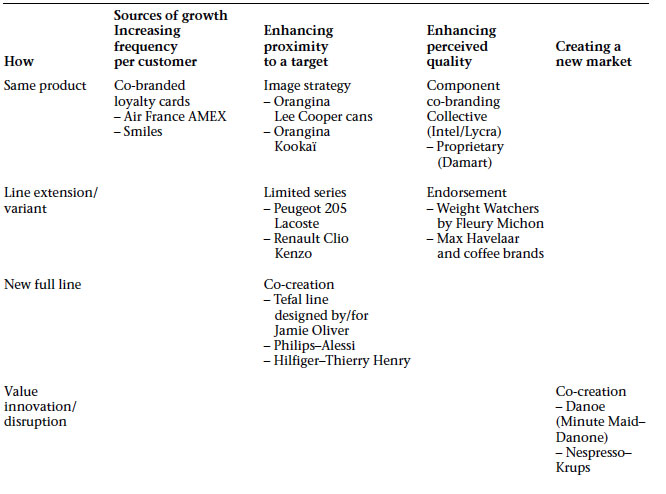