When Moulinex was asked why its results were bad, executives answered that the company had only offered 10 per cent innovation when the average in the industry was 26 per cent.

Innovation, source of growth and competitiveness, does not come easy. Here too, there are no miracles. The firms that innovate most, such as Procter & Gamble, l’Oréal and Gillette, devote on average 3.2 per cent of their sales to research and development.

Is there a lesson here for the food companies competing against DOBs and price leaders? The giants in the food industry spend much less in comparison on R&D: Unilever devotes 1.8 per cent of its sales to R&D, Nestlé 1.2 per cent, Kraft General Foods 0.8 per cent and Cadbury-Schweppes 0.4 per cent (Ramsay, 1992).

Innovation does not have to mean a technological breakthrough. Gillette is an extreme case: the Sensor required 10 years in research and led to 22 patents, the Sensor Excel 5 years and 29 patents, Sensor Plus Pour Elle 5 years and 25 patents. Many innovations can be linked to the service brought by the brand, in its packaging for example.

The head start that Evian took over Contrex and Vittel lies mostly in the micro-services which it was able to provide the customer with first. This service, although not spectacular or linked to advertising, allowed a gain of 0.5 per cent in market share, which, given the volumes involved, is gigantic.

Evian was thus the first to withdraw the metal capsule which sealed the bottle, which the consumer ripped off more often than not. That year, its sales jumped by 12 per cent when the market only grew by 7 per cent. The brand was also the first to introduce the handle which made the six-bottle pack carryable, the compactable bottle and so on.

On low-involvement products, incremental innovations are much appreciated by the consumer, the distributors amplifying the move if competitors do not react quickly – distributors prefer novelty.

In order to de-commoditise milk and to curb the surge of hard discounters, the milk brand Candia multiplied its innovations, giving each its own specific name to accentuate the differentiation and allow for strong advertising support: Viva (milk with vitamins), Grand Milk (enriched milk), Grand Life Growing (for children), Future Mother (ie for pregnant women).

These ‘daughter brands’ of Candia stemmed the advance of hard-discount products and enabled distributors to work with high-margin and high turnover products. These were not major technological innovations, but were add-ons of vitamins, minerals and so on to respond to the expectations of demanding customers.

In doing so, Candia made the whole category advance forward. Actually, nowadays Viva is rarely bought for its vitamins but for the brand and for what it stands for (a dynamic life-style, full of life, of youth). This product, which at first was advanced or premium, becomes the basis of milk, the reference. Candia was thus instrumental in enhancing the reference level for milk. The premium becomes a standard.

With a few exceptions (telephony, the internet, the need for clean water, safety, entertainment and so on), volumes in most markets are stable, or even on the decline. People who eat two yoghurts a day will not be induced to increase their consumption to four or six. People will only wash their hair a certain number of times a day.

There is a limit to the number of cars any country can tolerate. The future therefore lies with ‘value innovations’, to use a phrase coined by Chan and Mauborne (2000). These are innovations that create a new value curve by suppressing some benefits and boosting others, at an unprecedented level. RyanAir and Nespresso are classic examples.

Traditionally, market growth is achieved by lowering prices and the associated extension of distribution channels, which move towards the mass market or even – like Dell – direct marketing. Reduced prices introduced by Japanese, Korean and now Chinese brands have allowed anyone to have a television or coffee maker at home. Large retailers have democratised this progress, making low margin products compatible with the economic equation of high throughput. But where do you go from there?

The average coffee-maker price is s30. Would they become more desirable if sold at s28? What about 25, or 20? In many categories, the motor of growth is no longer price, but desire – and desire is created through the innovation of value.

The crisis in the Japanese economy would be much worse if it were not for the remarkable rate at which Japanese companies innovate, and the civic responsibility of Japanese consumers, who consume and renew their products as a matter of duty – thus providing collective support for the economy.

A source of competitive advantage

In Europe and the United States, what innovation has revived the coffee-maker market? Nespresso – an original concept offering access to the best-quality coffee at home at a price of around s400, thanks to a partnership between Nestlé and Krups. And what innovation has done the same for vacuum cleaners? Dyson, the s300 bagless vacuum cleaner, which has enabled the company to take 30 per cent of the UK market – which was previously assumed impregnable, as it was controlled by the majors (Hoover, Electrolux, Philips).

Which firm is currently Europe’s number two automobile manufacturer, just behind Volkswagen? The answer is not Ford, GM, Renault-Nissan or even Fiat. It is PSA, the group that jointly controls the Peugeot and Citroën brands. How is this possible? Between 1987 and 1997, the company’s annual sales rose from 1,952,474 to 2,077,965 vehicles, representing a growth of 6.4 per cent in 10 years.

Sales figures soared between 1998 and 2002, rising from 2,247,121 to 3,262,146 vehicles – a growth of 38 per cent in four years. The new CEO, J M Folz, had identified lack of innovation as the key factor behind the group’s stagnation (Folz, 2003). Between 2000 and 2004, PSA launched 25 new models and body shapes spread across its two brands, driven by restated brand values and a renewed understanding of today’s markets and customers.

Only innovation can slacken pressure on costs: it generates desire and a temporary monopoly. However, modern competition is all about non-durable but constantly repeated advantages, and sometimes allows new segments to be opened in which the innovating firm becomes the market standard. This fact is important for mass retailers.

Mass retailers are on the lookout for innovations that create value rather than just move market share from one brand to another. They expect the creation of new categories or segments that will dynamise sales and margins.

Where would Apple be without the iPod or iTunes? A brand will only survive in the long term if it can demonstrate its relevance with regard to the latent or expressed changing needs of a market which is in a state of constant evolution. It is through these new products and their associated advertising that this relevance is repeatedly demonstrated. Even brands whose success and business model are built on a single, durable product have been forced to change in order to survive and grow.

Even Nivea, with its traditional little blue box, has had to take the path of innovation in a market where dreams are fed by the hope offered by each new development. Even Lacoste, despite its association with the legendary 12 × 12 René Lacoste shirt – a sign of sporting elegance and distinction since 1933 – now holds two shows a year to present its new collections in its three segments of sports, sportswear and ‘dress-down’ Friday wear.

The same is true of Bic, whose worldwide success had until recently been based on a business model founded on two principles (one single brand, and single-product factories). Surely everyone is familiar with the Bic crystal ballpoint pen, disposable razor and cigarette lighter? Yet this model has had to be modified: the world has changed.

Competition has come in the form of even cheaper ballpoint pens from China, but also from the Japanese Mitsubishi group, with ballpoint pens that are priced at above the s1-mark but are attractive, innovative and practical: they create value. Bic has now found itself forced to become creative too, and even to make modifications to its business model to outsource a portion of its new products – an approach which hitherto had been unthinkable.

The virtuous cycle of innovation

What managerial conclusions can be drawn from the above points? As Figure 9.3 shows, the brand can be managed in two ways.

Brand management is thus a balance between preservation, renewal, extension and growth of the prototype on the one hand, and on the other the creation of new products and services to capture new circumstances of use and new customers, and to open new segments. The first part maintains, feeds and consolidates the brand base, while the second opens bridgeheads into the future, carrying what will tomorrow become the brand’s new prototype. 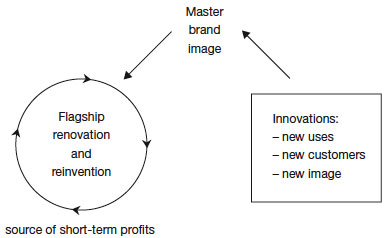 The effect of innovation on sales

Innovation does not merely work for itself: it benefits the brand in terms of both image and sales. It is what is known as the spillover effect, that is, the effect that advertising for one product has on the sales of another product in the brand. This effect, which is well known to companies, has been confirmed by marketing research (Balachander and Ghose, 2003).

Examining the sales of Dannon in the United States, the authors observed that advertising for a new Dannon product also had an effect on the sales of the prototype flagship product – the existing product most commonly identified with Dannon (which they wrongly name the ‘parent brand’ – strictly speaking, this term should refer only to Dannon itself, and not its products).

Most importantly, this effect is three times greater than the effect that the prototype’s own advertising has on its own sales (a 14.4 per cent rise in the probability of choosing the flagship product following advertising for the new product, compared with a mere 5.7 per cent following its own advertising).

There are several possible explanations for this phenomenon. The first – advanced by the authors themselves – is derived by reasoning. Since the prototype/flagship is strongly associated with the brand in consumers’ memories, the stimulation of the brand name through the promotion of a new product produces a feedback effect which activates a path leading to the cornerstone product, the prototype. We believe there is another explanation.

Every new product draws in new consumers distinct from those already consuming the established products. In so doing, they re-evaluate their overall perception of the brand, and are thus more tempted to explore its other hitherto ignored or undervalued products, and the brand’s flagship best-seller in particular. Innovation reframes the brand’s image and feeds it with the new tangible and intangible attributes brought by this innovation.

This is typically the case in the automobile sector, where the Peugeot 206 was named Europe’s best-selling car of 2002. It has brought consumers to the brand who until then would never have thought of buying a Peugeot, but are now even considering buying higher-end models such as the Peugeot 307, 407 or 607. Innovation is the force that removes barriers to a brand’s image – and the feedback effect modifies this image in a lasting way.