Today, brands want to globalise their advertising, although this may not be possible in certain situations for practical reasons. There is no shortage of questions on this score. How do brands construct global campaigns without damaging promotional creativity? How do they avoid demotivating the countries concerned? How do they inject a positive spiral into the company, throughout the countries concerned, to destroy the not-invented-here (NIH) syndrome? The great progress made in this field provides benchmarks from which lessons can be learnt. In the following analysis, it will be noted that, first and foremost, these campaigns identify what unites the brand, which is what it wants to globalise:

These must be identified before moving any closer towards an identical copy strategy, a common creative concept or even a global campaign. Companies also vary depending on whether they impose a certain discipline or encourage the search for standardisation.

Contrary to appearances, McDonald’s is not particularly prescriptive when it comes to brand advertising. Of course the marketing is global, like the product. With a few exceptions and adaptations (which are the focus of media attention), the concept is strong because it is standardised the world over – even though McDonald’s is organised according to national subsidiaries that are virtually independent.

With regard to advertising, the company’s corporate headquarters run the Ronald McDonald films and charity initiatives, and offer guidelines without seeking to impose any form of obligation or control. This is explained by the McDonald’s business model – the form of the advertising cannot be imposed upon those who pay for it, the franchisees in each country who pay 4 per cent of their turnover for the franchise. Once a month, a vote is taken at the country’s executive headquarters in respect of future campaigns.

Even so, an incredible impression of ‘commonness’ emerges from the television ads in all the franchise countries. But this is not the result of any form of constraint – at McDonald’s, informality is the unifying principle. It is due to the high level of understanding and sharing, by the group’s advertising managers worldwide, of the following elements:

As a result, the baselines vary greatly depending on the country, but they all represent the same source, the same identity, whether it is ‘Mac your day’ (Australia), ‘Every time a good time’ (Germany), ‘Smile’ (South America), or ‘You know our products from the cradle’ (Poland).

To promote even greater standardisation, without damaging the McDonald’s business model, advertising films from all over the world are shown at the Creative Brand Seminars held on a regular basis. This encourages countries to use very creative films that, although produced in other countries, are still extremely relevant. The ‘best practices’ are posted on the intranet and discussed at McDonald’s Hamburger University. Finally, incentives are offered for using other countries’ films. Today, 50 per cent of McDonald’s television advertising is based on the sharing and use of these ‘best practices’.

The car manufacturing group Volkswagen is extremely centralised in respect of marketing, but when it comes to advertising, allows great freedom of expression within a strong brand framework. For example, each country can produce a different film (based on the same strategic and creative brief) for the market’s most popular models, because creative advertising is not centralised. However, for less ‘mainstream’ products such as the 4 × 4 Touareg or the Phayton, a single film is produced by the German group’s corporate headquarters.

The new Polo provides a good example of the creative process. It is based on the very strong Volkswagen brand platform. In the past, the brand concept was centred around reliability and the tone characterised by an implicit understanding (humour) with the consumer. Today, due to the presence of the Skoda and Seat brands, the brand concept has evolved – it is now based on the democratization of excellence. Then there is the platform of the daughter brand, the framework of the positioning of the model and the consideration of all the models in the ‘Tone and Style of VW Advertising’ framework.

This framework is reminiscent of the principles used by the Tribal DDB advertising agency since 1960, which have created the exceptional distinctiveness of VW advertising and invested the brand with its unique personality. It includes such principles as: ‘Do not exaggerate: call a spade a spade’, ‘ Don’t shout, he can hear you especially if you talk sense’, ‘Be authentic, honest, human, open, accessible’, ‘Make people think and smile’, ‘Be teasing, elliptic: one should understand only at the point of revelation’ and finally and most importantly ‘Be original’. In DDB ads, Volkswagen cars rarely move.

The positioning of the Polo that provided a worldwide framework was ‘Polo inspires self confidence because you can feel it is the only car in its class that is built without compromise’. Then a creative brief was produced that summarised the advertising objectives, the advertising target and the consumer insight (‘I feel I can take on the world’), the product range and the reason to believe. Using this brief, local DDB agencies set to work and came up with the creative idea that was finally used: ‘Tough new Polo, careful it doesn’t go to your head’. Then the films based on this creative concept were produced by the local teams in each country.

Philips was recently restructured as a centralised organisation for a global brand, with its headquarters in the Netherlands. The new ‘unique’ brand concept was established – ‘A unique experience’ – valid for all three market segments (home entertainment, personal expression and professional business products). The company’s senior managementnow decides on the choice of transnational products that will form the basis of the brand’s publicity. It centralises briefings and develops the advertising campaigns with local design teams. The pretest procedure is centralised, as is production, with additional items built in at the filming stage of the ad, to reduce the cost of line extensions.

Nivea uses a similar model, with very explicit guidelines on the brand identity, the personality of each sub-brand, and the strict provisos for handling the publicity that create the ‘Niveaness’ so typical of all the brand ads, in spite of their diversity. The director of Nivea’s Worldwide Marketing, based in Hamburg, appoints three local marketing directors to work on a project, in partnership with the TBWA Hamburg advertising agency. They are chosen from countries throughout the world and their task is to define the creative platform.

This is then sent to the local TBWA agencies of the three marketing directors which produce creative ideas and then campaigns. The campaign chosen is then imposed in all countries unless it has to be customised. This happened in the case of the campaign to relaunch Nivea Soft, for which the creative idea was ‘soft as the morning rain’. But this had to be adapted for three countries – the UK, where it rains a lot, Saudi Arabia, where it hardly rains at all, and Indonesia, where rain is associated with the devastation caused by monsoons. The adapted ideas for each of these countries were:

These case studies illustrate the typical processes of groups wanting to globalise their advertising. But it should be remembered that globalisation must be pragmatic and take account of strong regional differences (different competitors, different consumer needs). It is therefore advisable to:

In conclusion, it is important to define the relationship to be established with the countries concerned – is it a logic of supplier and customer or one of authority, between decision maker and subordinate? Depending on the possibilities, there is a choice between decentralized or centralised management.

There are six types of relationship or different managerial functions, as summarised in Figure below, that can be applied to all elements of brand marketing. The globalisation process of each company can be represented on this grid by marking (with a cross) the point of intersection between an element of the marketing mix and the type of relationship with the countries concerned, in respect of this particular element.

Managing the globalisation process between headquarters and subsidiaries 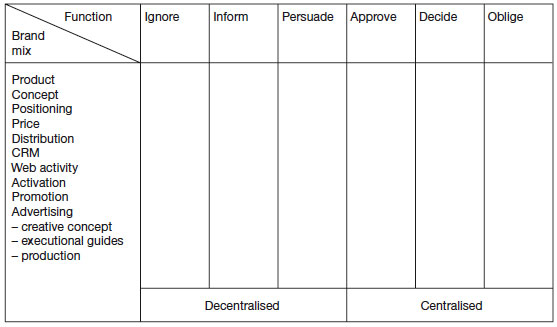