A given brand will not be jeopardised by competitors offering similar products, unless there are large quantities of the latter. It is indeed inevitable for certain models to be duplicated in the product lines of different brands. Suppose that brand A pursues durability, brand B practicality and brand C innovation:the spirit of each brand will be especially noticeable in certain specific products, those most representative or typical of the brand meaning.

They are the brand’s‘prototype’ products. Each product range thus must contain products demonstrating the brand’s guiding value and obsession, flagships for the brand’s meaning and purpose. Renault, for instance, is best epitomized by it stop minivans, Nina Ricci by its entrancing evening gowns, Lacoste by its shirts, Sony by its Walkmans and digital pocket cameras.

However, there are some products within given line that do not manage to clearly express the brand’s intent and attributes. In the television industry, the cost constraints at the low end of the range are such that trying to manufacture model radically different from the next-door neighbour’s is quite difficult. But, for economic reasons, brands are sometimes forced to take a stake in this very large and overall highly competitive market.

Likewise, each bank has had to offer its own savings plan, identical to that of all other banks. All these similar products, though, should only represent limited aspect of each brand’s offer (see Figure below). All in all, each brand stays in focus and progresses in its own direction to make original products. That is why communicating about such products is so important, as they reveal the brand’s meaning and purpose. 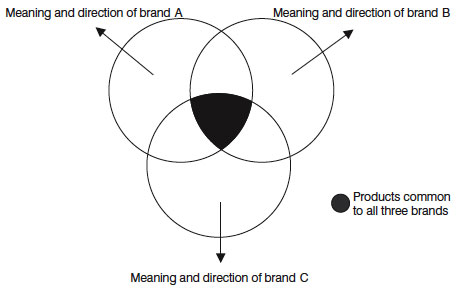 The problem arises when brands within the same group overlap too much, with one preventing the other from asserting its identity. Using the same motors in Peugeotsand Citroëns would harm Peugeot, built on the ‘dynamic car’ image. It is when several brands sell the same product that a brand can become a caricature of itself. In order to compete against Renault’s Espace and Chrysler’s Voyager, neither Peugeot or Citroën, Fiat or Lancia could take the economic risk of building a manufacturing plant on their own;neither could Ford or Volkswagen.

A single minivan was made for the first four brands. Similarly, a Ford–Volkswagen plant in Portugal was set to produce a common car. The outcome, however, is that in producing common vehicle, the brand becomes reduced to a mere external gadget. The identity message was simply relegated to the shell. So each brand has had to exaggerate its outward appearance in order to be easily recognized.