In 2003, the three giants Procter & Gamble, Henkel and l’Oréal bid against each other to acquire Nivea, putting in very high offers – a sign of their extraordinary confidence in the growth potential of the company and its brand. What an astonishing outcome for a German company founded in 1912 in Hamburg on a single product: a little round, blue metallic box containing skin moisturizing cream, which was treated almost like a medicine.

However, the company and its brand were split up after the war, and like other German brands (such as Persil), its assets were given to other companies across the world as war damages. This is why the brand had to be rebuilt with great patience, with the assets being bought back whenever and wherever possible, such as in the United States in 1974. In 2003 Nivea was the world’s leading skincare brand, with a turnover of s2.5 billion and an average growth of 15 per cent per year.

The brand’s growth has been achieved entirely through progressive, carefully planned extensions repeated in country after country. As we shall see, each extension constructs a specific facet of the brand while penetrating new markets or new needs, all the while remaining faithful to the brand’s heritage and key values.

Nivea provides a good example of wellmanaged systematic extensions. The lifespan and growth of this world-leading skincare brand can be explained through two key factors: the modernisation of the prototype product, Nivea cream, in its round blue box, and systematic brand extension via daughter brands (which Nivea calls ‘sub-brands’).

The little round box is the prototype of Nivea, and carries the brand’s values. In every country it is introduced first, and made available at all sales points, explaining its penetration into all social environments. Next come the extensions, in a pre-established order, to build the brand: first care products, followed by hygiene, then hair products, and lastly make-up. The daughter brands expand these categories, with their specialization based on age (Nivea Baby), purpose (Nivea Sun), gender (Nivea for Men), and so on.

However, if it is to maintain itself, the brand must work tirelessly to recapture its relevance, and this is why it must innovate. Each advertisement for a Nivea daughter-brand now places the emphasis on innovation. But even the prototype has needed an update: this has been the role of Nivea Soft, with its white box, as modern generations look for a cream which is less greasy and penetrates the skin more quickly. Nivea Soft is bringing the brand’s foundation up to date. 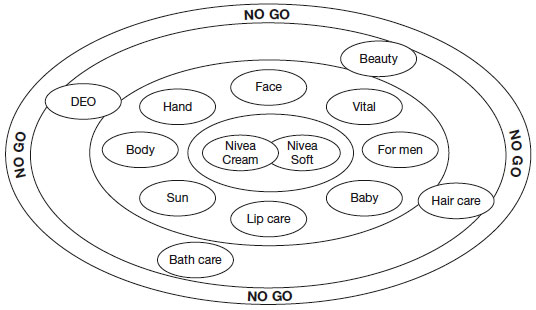 Extensions very soon came to form a part of Nivea’s business model. An analysis of its brand launches in all countries – from the United States to Russia and China – reveals a fixed, well-planned pattern of development. The brand is launched in each country using its cornerstone (founding, prototype) product, portraying itself as a healthcare brand. Next follows Nivea Visage, a sub-brand which is key to its long-term business development. Nivea Visage is the perfect symbol of care: we entrust our faces to it.

After that follow the daughter brands judged to be most relevant for each different country, deepening this role and mission: Nivea Hand, Nivea Body, Nivea Sun, Nivea Lip Care, and three brands that are segmented by customer type: Nivea for Men, Nivea Vital (for the older market) and Nivea Baby (formerly known as Babyvea). The next to arrive are hygiene products, via the Nivea Deo and Nivea Bath Care daughter brands. Finally, these are followed by Nivea Hair Care and Nivea Beauty.

Thus, the order of entry in each new country is always carefully planned: care products first, followed by hygiene, then hair products and lastly make-up. Similarly, women’s care products come before men’s: Nivea Visage is always launched before Nivea for Men. Nivea’s philosophy is that each country organisation is free to choose to launch a daughter brand, depending on the available potential in that market. However, Nivea Visage is of key importance.

For example, although the care products market in Brazil is small in comparison to hygiene products, the brand construction order is still maintained. After all, Nivea is not Dove. The latter (Unilever) brand is based on hygiene (with as its core product a soap containing 25 per cent moisturising cream), but is now successfully expanding into the entire hygiene and beauty market worldwide.

The brand architecture is an umbrella, in the sense that each daughter brand is named descriptively, and thus represents a statement of the brand’s values as they pertain to that category. However, note that the logos of each daughter brand are not uniform. This tiny difference makes the brand open, living and non-monolithic. Furthermore, each logo reflects a personality and values specific to the daughter brand. In this respect, the Nivea brand is also a sort of branded house (source brand) with two clear brand levels, even though the mother level is dominant in this case.

Indeed, each daughter brand has its own personality, and this is a deliberate decision. Furthermore, the aim of each extension is to provide not only a deepening of the core competence (loving care for the skin) and greater penetration of the category, but also specific components of the overall image. For example, Nivea Sun is where the family and protection aspect is communicated, and so advertising for Nivea Sun shows mothers and children, and fathers and children, together.

Likewise, the final extension – the one farthest from the core of the brand – is Nivea Beauty. By now we have come a long way from long-lasting products, simplicity and harmony. In this category, the key words are accelerated range renewal (four per year), the game, fun, seduction and so on. However, in highly developed, sophisticated countries this extension is necessary. It brings young girls to Nivea who would not otherwise have come, and who will subsequently try out other products from the range. It also adds a necessary touch to the brand image: more modernity and ‘fashion’.

We can therefore see that under this system, daughter brands are not extensions in the iterative sense, as they would be for a hypothetical brand X asking itself what else it could do. In reality, they are the means through which the brand’s ‘big plan’ takes shape. Extension presupposes the existence of a long-term vision. Before sinking the pillars for a bridge across a river, one must first have picked a clear destination point on the other side. These extensions are not extensions in the traditional sense, but rather components of a pre-planned whole which accumulates its meaning, coherency and scale through them.

As with any new product launch, the key question is that of perceived distinctiveness from the existing competition. Of course, the brand brings its own intangibles and image equities, but they are not enough on their own: a physical basis for differentiation is needed. This is, therefore, where innovation comes in:

Lastly, as with any system, there are certain no-go areas – such as, for example, anticellulite products. This is not because no market exists: it does exist, and it is a thriving one. Rather, it is because none of the existing products work well. To enter this area with another product that did not really deliver its promise would therefore be to break the link of consumer confidence in Nivea –and more than any other brand in its sector, Nivea wants to be the brand of confidence.

There are many examples of companies that have built their meaning around successive extensions. For example, the Canadian company McCain has three divisions, frozen fries, pizzas and soft drinks. In high-potential countries, it enters by means of frozen fries, then after three years launches its pizzas, and lastly soft drinks (for example, Colorado iced tea). McCain is thus no longer a fries, pizza or soft drinks brand, but instead symbolises North American cooking (rich, plentiful, playful, modern, relaxed) in the eyes of non-American consumers. This process of scope enlargement takes time, and presupposes that the brand is able to carry it off, as we shall see below.