Many companies and advertising agencies use the phrase ‘brand essence’. The analysis of this practice reveals that it stems from a desire to summarise the identity and/or the positioning.

Some would say that the essence of Volvo is security (its positioning), others would say that the essence of Volvo is ‘social responsibility’ (a high-order typical Scandinavian value), from which is derived the desire to build the most secure as well as recyclable cars. Similarly, some speak of Mars’essence as ‘bite and smoothness, with caramel and chocolate’, others as ‘vitality and energy’.In essence, the concept of ‘brand essence’ asks in an temporal and global way: what do you sell? What key value does the brand propose,stand for? No more than three!

Part of the discussion lies in the notion of value: some speak of benefit, others of higher order ideals, such as those revealed in a classical means–ends questionnaire called‘laddering’. In fact it is possible that for some brands,essence is intimately tied to the product experience,whereas it is not true for others.

Let us look at an example. What is Nivea’s essence? To answer one needs to first specify Nivea’s identity. We should look to the prototype to find the key values of any brand. In Nivea’s case, this is Nivea cream and its characteristic blue box – the means via which the brandgains entry to each country, and thus the brand’s underpinning factor.

More than a mere product, Nivea cream in its round box constitutes one of the first acts of love and protection that a mother performs for a baby. After all, doesn’t everyone remember the typical scent, feel, softness and sensuality of this white cream, rein forced by the Nivea blue? The blue box is thus the brand’s true foundation in all senses:

So what is the significance of this blue colour and this flagship moisturizing cream, the cornerstones of the whole edifice? Remember that blue is the favorite more than half the population of the western world, including the United State sand Canada. It is the co lour of dreams (the sky), calm (the night), faithful, pure love (the Virgin Mary has been depicted in blue since the 12th century), peace (UN peacekeepers) and the simple, universal appeal of blue jeans(Pastoureau, 1992).

The cream’s whiteness is the white of purity, health, discretion,simplicity and peace (a white flag). As for chemistries cream itself, it adds water to the skin, an essential injection of a human aspect to one’s natural environment.This reveals the values of the brand. Nivea’sphilosophy penetrates to its very core: a view of life founded on human coexistence, and containing strong moral values such as confidence,generosity, responsibility, honesty,harmony and love. In terms of competence, it stands for safety, nature, softness and innovation.

Lastly, it sells itself as timeless, simple and accessible, at a fair price. And this is the way in which the Naive brand itself is identified worldwide. Even if at any given moment, within a particular group, segment or country, these values are not perceived,they remain the values that form the basic identity of the brand. What does Naive sell in essence? Pure love and care.

Other examples of brand essence directly derived from the early prototype of the brand are:

Do we need the brand essence concept? It has a managerial utility: trying to summarise the richness of an identity. As such it is easier to convey. Its inconvenience is that the meaning of words is highly culturally specific. Thus aword as simple as ‘natural’ does not evoke the same things in Asia and in Europe, and within Europe there are huge differences between southern countries and northern countries. Assuch, to understand a brand one really needsthe full identity prism, where words acquire their meaning in relationship with others.

Practically, the brand essence can be written in the middle of the brand identity prism or on the top of the brand pyramid, relating essence, values, personality and attributes.

Both identity and positioning are summarised in the brand platform. When the brand carries multiple products, each of them expresses the values with its own weighting, and has a position that competes against specific brands. 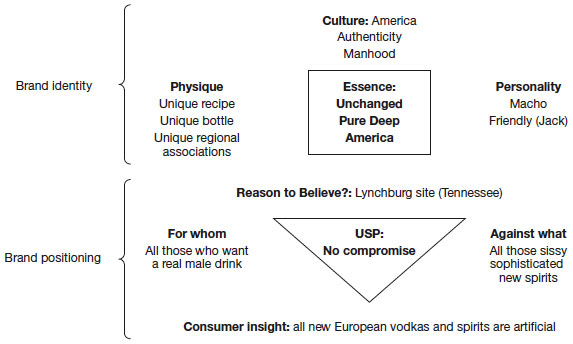