Table below is particularly revealing in this regard. The first and only factor that justifies for most people interviewed (55.2 per cent) the non-application of a global strategy is legal differences. It is true, for example, that laws which deal with the definition of products, the right to sell, the authorisation and manner of advertising of alcohol and the use of children in advertising vary considerably.

However, because of the Single European Act, Mercosur in South America or the GATT, these differences in legislation will have to be evened out, thus suppressing the major obstacle to globalisation. The second factor is linked to the local competitive situation (number and strength of competitors, levels of brand awareness, type and level of distribution, stage in the product life cycle).

Taking the example of Orangina once more, it is not possible to approach the market where Orangina is a close second to Coca-Cola in the same way as the English market, where it occupies a niche in the premium segment of carbonated orange soft drinks and competes with Fanta, Sunkist and Tango, the local dominant brand. This has a deep impact on market strategy and positioning, but the Orangina identity is nevertheless the same.

Moreover, since they are known in advance, these very different market situations can be integrated when filming commercials. Some commercials destined for countries where Orangina is not known will need longer sequences on the product and on shaking the pulp. At the other end of the scale these sequences can be reduced in other countries. The significance of this factor concerning the local competitive situation explains in some measure global success of brands such as Mars, Gillette, McDonald’s, Coke, Bailey’s, Dell, eBay, Ryanair, Somfy and so on. They didn’t really have any competitors in the market, and they were new products, creating new segments or revealing the start of a latent transnational demand.

What differences between countries would compel you to adapt the marketing mix of the brand? 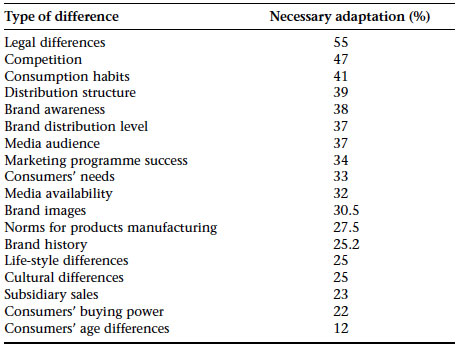 As we can see, the percentage varies from 10 per cent to 93 per cent. Such a variance is linked to the fact that the phrase ‘brand globalisation’ refers both to identity and to action (the marketing mix). It is the fixed image of the brand (its fixed logo) that is the most globalised, a sign that image precedes sound. What counts is that the exclusive typography and the red colour of Coca-Cola can be found throughout the world, even if it isn’t written ‘Coca-Cola’. Unilever does not use its Motta brand of ice cream everywhere, but its local equivalents use the same colour and signal codes. The brand name comes in second.

It is true that most companies have inherited some odd situations where what is called Dash in Italy is called Ariel in Europe and so on. When brands are local strengths it is not a good idea to risk standardising too fast. The operational facets of the marketing mix are naturally adapted to local markets, all the more so as we approach below-the-line activities or local financial optimisation regarding the price. In the era of television and multimedia, image wins over word.

All the more so in Third World countries where illiteracy is common. Colour codes and graphics must be global: Coke is red, Heineken is green. However, even the strongest brands hesitate when the question arises of what to call them in the enormous Chinese market (see below).

Let us analyse in depth how these barriers impact the internationalisation of brands.