O/RM is based on entities. An entity is a class that has its properties mapped to table columns. Usually, databases have a lot of tables and a lot of columns. An O/RM framework such as LINQ to SQL provides tools to generate entities automatically, so developers don’t need to create them manually.

SQLMetal is a command-line program that generates entities from a provided database. The executable resides in the C:Program FilesMicrosoft SDKsWindowsv6.0Abin folder, but you can easily use it from the Visual Studio 2008 command prompt, accessed from the Visual Studio Tools menu. The following is the command to use SQLMetal:

For [options], you can use the options listed in Table 18-1. The [input file] optional option is a SQL Server Express filename (.mdf), a SQL Server CE filename (.sdf), or a DBML filename (.dbml). You can provide the database filename and obtain the entities mapped on the database’s structure. More interesting is the DBML file option. This file is easy to read and modify, so you can change its content and obtain a part of the whole database’s structure (just as with Visual Studio’s LINQ to SQL Designer) or easily re-create entities after the database has changed its structure. For example, if the database administrator (DBA) changes a table name or adds a new column to a table, you can modify the DBML file manually and execute the SQLMetal tool to re-create the entities. 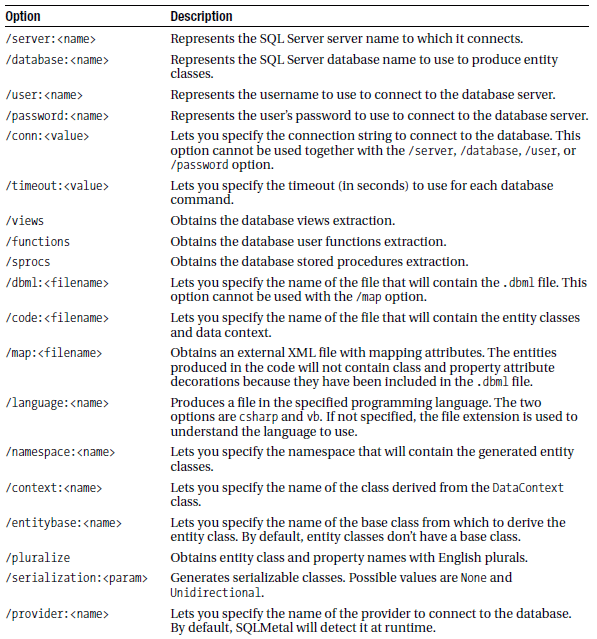 In this example, the tool connects to an instance of a SQL Server 2008 database called SQL2K8. Then it examines the structure of the AdventureWorks database and generates the entities. They will be written in the AdventureWorks.cs file with C# language code.

In this case, SQLMetal uses a connection string to connect to the database. Then it analyzes the AdventureWorks database and generates a DBML file.

Finally, here’s an example that specifies options to generate code that manages stored procedures, functions, and views other than entities:

The LINQ to SQL Classes Designer, included in Visual Studio 2008, is a visual designer that allows you to drag and drop a table from Server Explorer onto the designer. In this way, you can generate entity code automatically. The designer generates DBML files.

The designer is able to recognize when tables have relations. Figure shows the designer with a couple of tables from the AdventureWorks database. The designer has recognized one relationship, indicated by the arrow, and created the necessary classes. 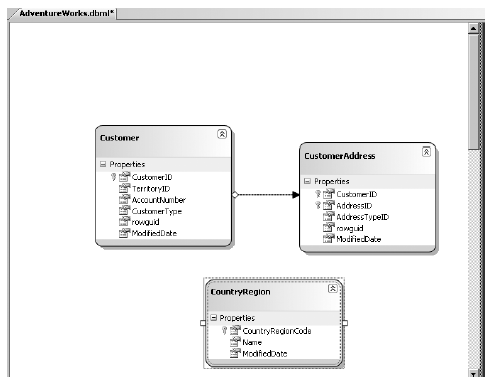 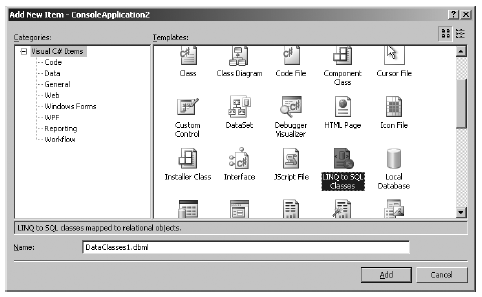 Now that you’re familiar with the tools, it’s time to analyze the code that they generate.

After you’ve used either SQLMetal or LINQ to SQL Classes Designer to create entities, you can use the classes to manage the database. But first you should understand what has been generated by the tool that you’re using.

If you have used SQLMetal with the /code option, just open the file with your preferred text editor. To read the code generated by the Visual Studio LINQ to SQL Classes Designer, you need to expand the DBML file node in Solution Explorer, as shown in Figure, and take a look at the source code within the designer.cs file.

The code generated by the LINQ to SQL Classes Designer is contained in the designer.cs file. 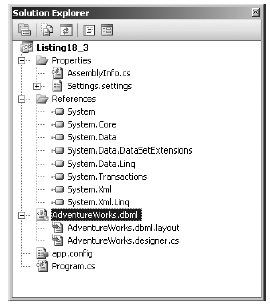 Next in the generated code, you’ll see that the LINQ to SQL framework classes have been added to the System.Data.Linq namespace:

This snippet of code defines a property for each entity within the class (in this case, two properties). The GetTable method provided by the DataContext class returns an instance of the entity. So, it’s time to look at how an entity is defined in the class:

Every entity in the class has a Table attribute with an optional Name property used to indicate the name of the table as specified in the database. You can omit Name when the partial class’s name is equal to the table’s name.

The LINQ to SQL framework has a monitoring feature that allows it to catch changes to your entities after having filled them with data retrieved from the database. This feature is provided with the help of the entity class and its implementation of both the INotifyPropertyChanging and INotifyPropertyChanged interfaces. The methods defined by these interfaces enable the framework to inform you that a property is both going to change and has changed, respectively.

Next in the generated code, you can find the declaration of a private field for each column defined in the table. The Customer entity code has these declarations:

Every field has the related column’s datatype, and a nullable datatype is used when the column defined in the database can contain a null value. Much more interesting are the EntitySet and EntityRef classes. They are provided by the LINQ to SQL framework to manage relationships between entities and data consistency. The EntitySet class contains items from the many part of the one-tomany relationship type between the entities. In this case, a customer can have more than one address specified in the CustomerAddress table, so an EntitySet<CustomerAddress> field is defined to store related records. The EntityRef class represents the one part of the one-to-many relationship type between the entities. So, if you examine the code of the CustomerAddresses entity, you will see the EntityRef<Customer> field. This is correct, because a customer address belongs to only one customer.

Continuing with the generated code, you’ll next see this: 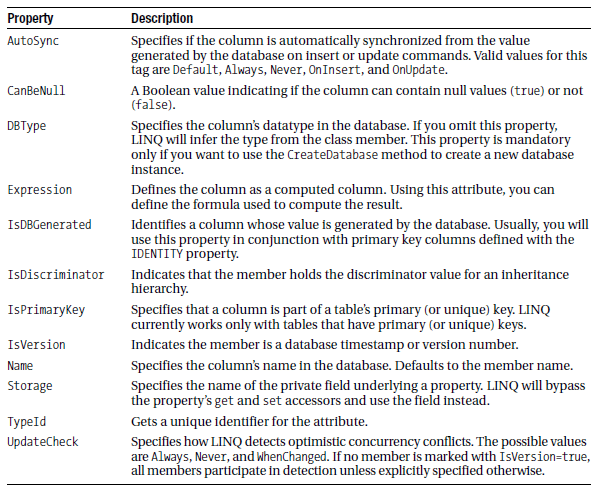 The last snippet of generated code that deserves an explanation is where the entity manages the EntitySet and EntityRef fields. Here’s that bit of code from our example: 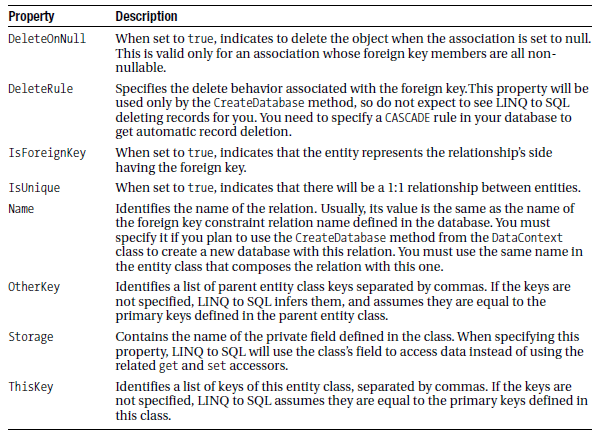 In the following code snippet, you can see the code within the CustomerAddress entity, the one representing the many side of the relationship:

In the preceding snippet, the set accessor contains very important code because it manages the consistency of the entity object’s data. The Assign method is one way to relate a Customer object to a CustomerAddress object. But using the CustomerAddresses property is not the only way to relate those objects. You can start creating or retrieving with a query to a CustomerAddress object and then use its Customer property to relate them. Using this approach, you call the code within the set accessor of the Customer property. The following code snippet demonstrates this concept:

The set accessor of the Customer property is responsible for managing the data and preventing it from becoming inconsistent. From the preceding code snippet, you can see that a CustomerAddress object is retrieved by a query. This object already contains a relationship with a Customer record, but in the code, you are going to change it because you are assigning the new Customer object to the CustomerAddress object with its Customer property. The set accessor must avoid data inconsistency, so it needs to break the relationship with the old Customer and then create the new one.