What is the use of Command line tools in Scrapy?

Scrapy command line tool known as 'Scrapy tool' is used to control Scrapy. It includes the commands for various objects with a group of arguments and options.

Scrapy will find configuration settings in the scrapy.cfg file. Below are a few locations

Scrapy can also be configured using below environment variables

Below structure shows the default file structure of the Scrapy project.

Scrapy.cfg file is a project root directory which includes the project name with the project settings.

Scrapy tool provides some usage and available commands as follows

You can use below command for crearting project in Scrapy

This creates a project called project_name directory. Next, click on newly created project using below command

Scrapy consists of some built-in commands which are used for your project. To see the list of available commands use below command

When you run below command, Scrapy displays a list of available commands as listed

Below are some project related commands

A custom project command can be built with COMMANDS_MODULE setting in Scrapy project. It will include a default empty string in the setting. You can add below custom command

Scrapy commands can be added using the scrapy.commands section in the setup.py file shown as follows

Above code adds cmd_demo command in the setup.py file. 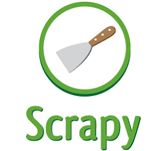