What is Scala - Strings?

This chapter explains you about the Scala Strings. In Scala, as in Java, a string is an immutable object, that is, an object that cannot be modified. On the other hand, the objects that can be modified, like arrays, are called mutable objects. Strings are also very useful objects, in the rest of this section, we present some important methods of 'java.lang.String' class.

The following code can be used to create a String -

Whenever the compiler encounters a string literal in the code, it immediately creates a String object with its value, in the above case, “Hello world!”. String keywords can also be given in alternate declaration as shown above.

As mentioned earlier, String class is immutable. String objects once created cannot be changed. If there is any necessity to make a lot of modifications to the Strings of characters then we use String Builder Class available in Scala!.

Methods which are used to obtain information about an object are known as accessor methods. One accessor method which can be used with strings is the length() method, which returns the number of characters contained in the string object.

The String class includes a method for concatenating two strings -

This returns a new string that is string1 with string2 added to it at the end. You can also use the concat() method with string literals, as in -

Strings are more commonly concatenated with the + operator, as in -

The following lines of code to find string length.

You have both printf() and format() methods to print output with the formatted numbers. The String class has an equivalent class method, format(), that returns a String object rather than a PrintStream object.

Try the below example program, which makes use of printf() method -

Save the above program in Demo.scala. The following commands are used to compile and execute this program.

String Interpolation is a new way to create Strings in the Scala programming language. This feature supports the versions of all Scala-2.10 and later. String Interpolation: The mechanism to embed variable references directly in process string literal.

There are three types (interpolators) of implementations in String Interpolation.

The literal ‘s’ allows the usage of the variable directly in processing a string, when you prepend ‘s’ to it. Any String variable with in a scope and that can be used with in a String. The following are the different usages of ‘s’ String interpolator.

The following example code snippet for the implementation of ‘s’ interpolator in appending String variable ($name) to a normal String (Hello) in println statement.

Try the below example program of implementing ‘s’ interpolator.

The literal ‘f’ interpolator allows us to create a formatted String, similar to the printf in C language. While using the ‘f’ interpolator, all variable references should be followed by the 'printf' style format specifiers such as %d, %i, %f, etc.

The ‘raw’ interpolator is very similar to the ‘s’ interpolator except that it performs no escaping of literals within a string. The following code snippets in the below table will differ the usage of ‘s’ and ‘raw’ interpolators. In outputs of ‘s’ usage ‘\n’ effects as new line and in the output of ‘raw’ usage and the ‘\n’ will not effect. String MethodsIt will print the complete string with escape letters.

Following is the list of methods defined by the 'java.lang.String'class and can be used directly in your Scala programs - 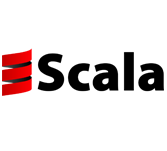