What is Unit Testing?

Suppose the task is to create a sales order and save it. To perform unit testing for this task, the tester should know that the sales order can be saved using the SAP organization elements like customer master data, partner functions, material master data, company code, credit control area, sales organization, etc.

In ABAP development, Unit testing can be performed to check if a report can be created from developer-generated data. It requires assistance from the domain expert.

What is System Testing?

System testing involves testing the enire system as per the requirement and specification. It is the the integration of elements of a SAP system to ensure that related SAP functionality are linked together in the development environment.

If you say a cash flow for a quotation in an organization would show that a quote can be used to create a sales order, a delivery can be created and processed from the order, the delivery can be billed, the billing released to accounting, and a customer payment applied against the accounting invoice.

Each unit is tested like this and then the test results are combined using system testing.

What is scenario-based testing?

Scenario testing is performed as per specific business cases.

Suppose there are a few tasks that are specific to a customer segment or a given product line or a set of services. For these specific line of target, you have different scenarios that you need to test. This testing is also performed in the development environment.

What is Integration Testing?

This testing method is used when multiple systems are combined together to test the output of the integrated system. In this testing, testing data comes from a real data extraction source. Data is known to business end-users.

What is SAP Interface Testing?

Interface testing ensures that a business process on a SAP system runs automatically, the events are triggered, and the results are transferred to the receiver system. Interface testing involves execution on the sending system followed by automatic generation of the interface output, and then the receiving system consuming that file and proving that a business process continues on the receiver.

Ideally, interface testing involves larger testing activities as a project progresses. Interface testing shows that triggering works, the data selection is accurate and complete, data transfer is successful, and the receiver is able to consume the sent data.

What is SAP User Acceptance Testing?

What is SAP System Performance Testing?

Performance testing identifies bottlenecks and coding inefficiencies in the SAP system. It is not likely that system performance tuning is perfectly set up and the program is running with optimized code.

What is SAP Load Testing?

Load Testing id done to test the load handling capacity of the system. Here, the tester applies maximum load on a system, either online users or periodic batch processing, and identifies whether the system is capable enough to handle the load. If not, it finds out the steps needed to improve performance.

What is SAP Security and Authorizations Testing?

This type of testing is used to ensure that users are only able to execute transactions and access appropriate data that is relevant to their project.

As with the implementation of Security standards, this is really important to test if security and authorization is placed in a system. Test IDs for job roles are created and used to both confirm what a user can do and what a user cannot do.

What is SAP Cutover Testing?

Cutover testing is usually performed once in a project lifecycle. Here a full-scale execution is done of all the tasks involved to extract data from legacy systems. Then, to perform any kind of data conversion, load the results into the SAP system and fully validate the results, including a user sign-off.

What is SAP Regression Testing?

When you upgrade your SAP system or apply a patch, it shouldn’t affect the functionality that is expected to be performed by the users. In addition, it should not affect the new features that are supposed to be introduced in a new release. 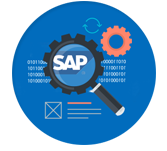