How to create a central contract in SAP SRM?

SAP SRM allows to create a central contract manually. If you want to create multiple contracts which are similar to each other then create a template after that copy an existing contract based on the template.
To create a Central Contract, go to SAP SRM → Strategic Purchasing → Contract Management → Create Central Contract
Find different tabs — Header tab, Overview tab and Distribution tab. In Overview tab, go to fill the item details and general header data. You can fill the following details in a contract −

Here you need to enter the target quantity and target value. Target quantity explains about the number of units to be purchased from a supplier in a time period.

Release value is known as accumulated value of all POs against the central contract.

Basic contract only contains header data and conditions. Here you can’t put line items and cannot be distributed to a catalog. 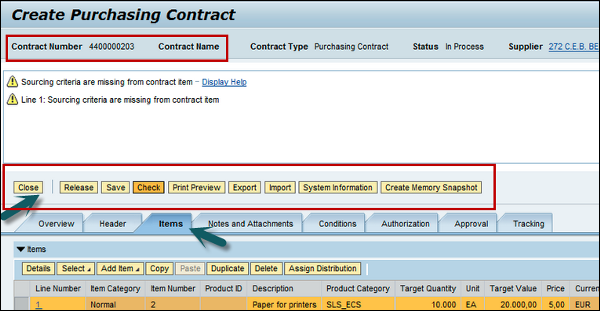 Once system is configured an approval workflow is done after selecting Release for a contract. Here, contract status is set to Awaiting Approval.

You can select close Contract if a contract is in expired or released status and the status of the contract is set to Complete and this is an irreversible status.
Now search for the completed contracts and use them as template for creating new contracts.

Delete option is used when a contract is not released, then set the status to delete and this contract is achieved.

Expired option occurs when the validity period of a contract expires. Here it allows a system administrator to schedule a report when a contract is expired.

Negotiation option is selected for renew and is in saved state.

This is set when you select a contract for renewal in released state.

Locked option is set when you want a contract to be temporary unavailable as source of supply. Use Unlock to unlock a locked central contract.

Release reject option is used when the central contract is not approved for release.

Release option is used when you select a central contract to release and it has been approved. You can use it for sourcing.

This status is set when you save a central contract. This contract is not available for sourcing till it is approved and released. 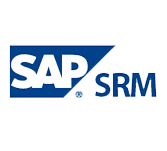