Configuration Data, Master Data, and Transactional Data
In the SAP R/3 system, there are three basic types of data. Configuration data is usually defined in the Implementation Guide(IMG), and consists of data suchas plants, object types, units of measure, and so on. This data, once configured, is rarely changed but if changes are required, they are most often performed in another SAP instance (system) and, when tested appropriately, are “transported”to the SAP R/3 production environment. Configuration data is often used toprovide valid values in matchcode searches (pull-down/ drop-down menus).

Master data, which is entered and changed on an ongoing basis, but not usually frequently, is mostly used to define equipment, bills of materials, and soon. For example, once a piece of equipment has been defined, it is unlikely to change very often.

The other basic type of data is transactional data, which consists of informationentered into the system on a day-to-day basis, such as work orders.While master data is largely static and does not change often, transactional data is provided and/ or changes often. After a work order is created, for example, various changes may be made to the work order, such as planned labor and materials.

It would be beneficial to consider the expected volume of transactional data into the system in order to plan for sufficient storage space for the data. In addition, plan for the length of time for which to retain data in the system, after which time the data should be archived and deleted from the system inorder to control storage requirements and improve system response. 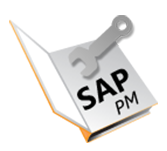