Cardinality is a property of a join that describes how many rows in one table match rows in another table. Cardinality is expressed as the minimum and maximum number of rows in a column at one end of a join, that have matching rows in the column at the other end of the join.

The minimum and the maximum number of row matches can be equal to 0, 1, or N. A join represents a bidirectional relationship, so it must always have two cardinalities, one for each end of the join.

Cardinality of a join

The two tables Customer and Reservations are linked by a join. 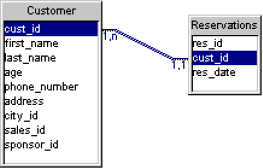 The cardinalities in the above join can be expressed as follows:

How are cardinalities used In Designer?

The cardinality of a join does not have a role in the SQL generated when you run a query. However, Designer uses cardinalities to determine contexts and valid query paths.

A context is a collection of joins which provide a valid query path. You use contexts to resolve join problems that can return too many or too few rows because of the way that tables are linked in the target database.

Contexts affect the SQL generated for a query as they either direct the end user to take a particular join path, or solve a join path problem:

You need to verify that cardinalities are correctly set for all joins in your schema to ensure that you have the correct contexts, and that you have valid join paths.

Setting cardinalities can also help you understand how tables are related in the database, and to graphically identify potential join path problems in your schema.

You can display cardinalities in the Structure pane using the following symbols: 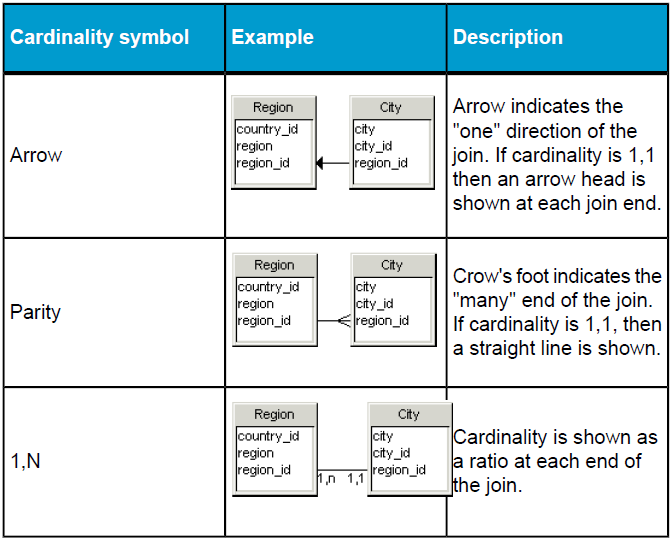 The Options dialog box opens to the General page.
The Graphics page appears.

What cardinalities can be set for a join?

You can set the following cardinalities for a join: 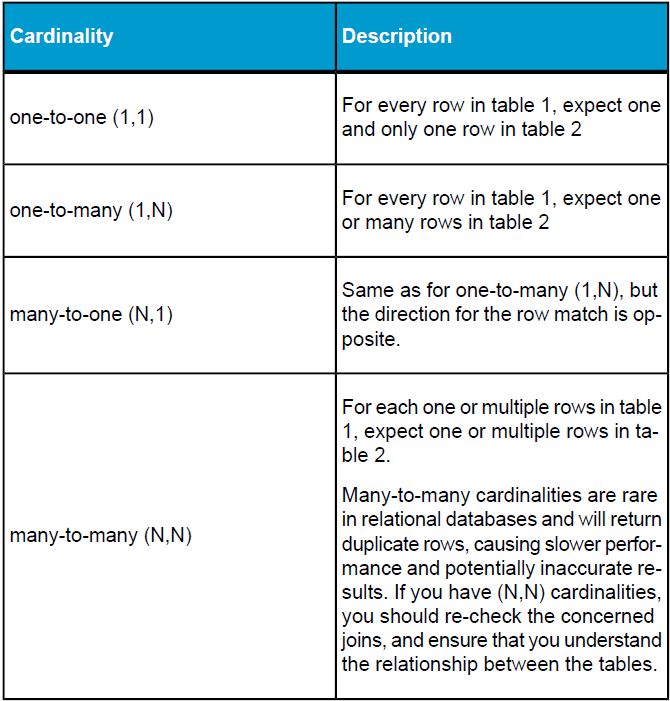 You can set cardinalities manually, or use the automatic cardinality detection tool in Designer. Both methods are described below.

You can manually set cardinalities for joins by defining cardinality for a join in the "Edit Join" box for a join.

When you set cardinalities manually, you must consider each individual join. This helps you to become aware of potential join path problems in your schema. You may not find these problems if you only select automatically detected cardinalities; for example, isolated one -to-one joins at the end of a join path, or excessive primary keys where not all columns are required to ensure uniqueness.

What are the criteria for setting cardinalities?

You evaluate the relationship between primary and foreign keys to determine the cardinality for a join as follows: 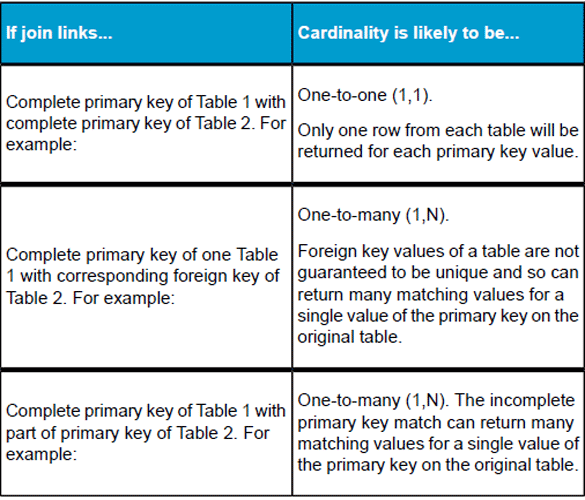 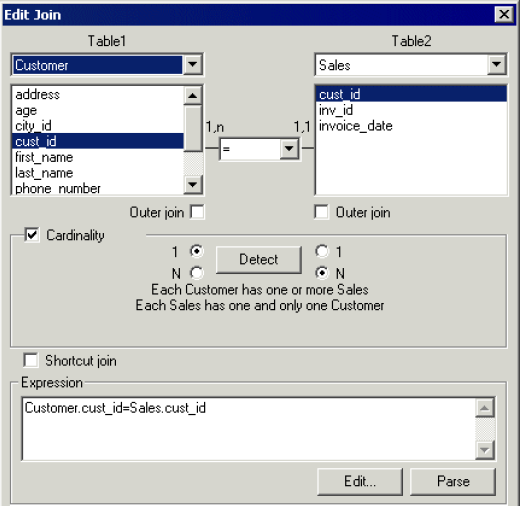 You can use the Designer feature Detect Cardinalities to automatically detect cardinalities for the following situations:

Note:You should use automatic cardinality detection appropriately. It can be very useful to quickly get all the cardinalities detected in the schema, however, there are a number of structural problems inherent in many relational databases which can lead to incorrect cardinality detection. These include incomplete primary joins, and over engineered primary keys.

To automatically detect cardinalities for a selected join:

The cardinality is displayed with the crow's foot at the many end. 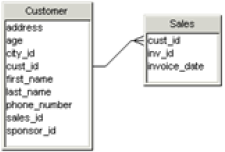 If you select Tools > Detect Cardinalities directly without selecting a join, you receive a message indicating that no join is selected, and asking if you want to detect cardinalities for all joins.

Click the Detect Cardinalities button.
A message box appears asking if you want to detect cardinalities for all joins. All joins in the Structure pane are shown with cardinalities.

The Options dialog box opens to the General page.
The Database page appears.

To automatically detect cardinality from the Edit Join box:

The cardinality radio buttons are automatically selected for the detected cardinality. The two cardinalities are also expressed in sentence form.

You can improve the response time of cardinality detection by modifying a parameter in the PRM file of the target RDBMS. This directs the detection algorithm to read two instead of three SQL statements, improving the performance of the algorithm.

The PRM file is a text file that lists parameters used to configure universe creation and SQL query generation in Web Intelligence. There is a PRM file for each supported RDBMS.

PRM files are located in the database folders under<INSTALLDIR>win32_x86dataAccessConnectionServer

Verifying which PRM file is used by a connection

To verify which PRM file is used by a universe connection:

This line indicates the file path and name of the PRM file currently used by the active universe. 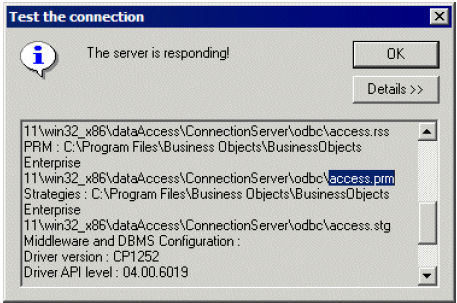 You return to the Parameters dialog box.

The PRM files are stored in the Data Access folder in the Business Objects path.

The next time you open the universe, automatic cardinality detection is optimized.

You can use the following criteria for determining cardinalities in special join situations, which if untreated, could lead to errors in your schema design: 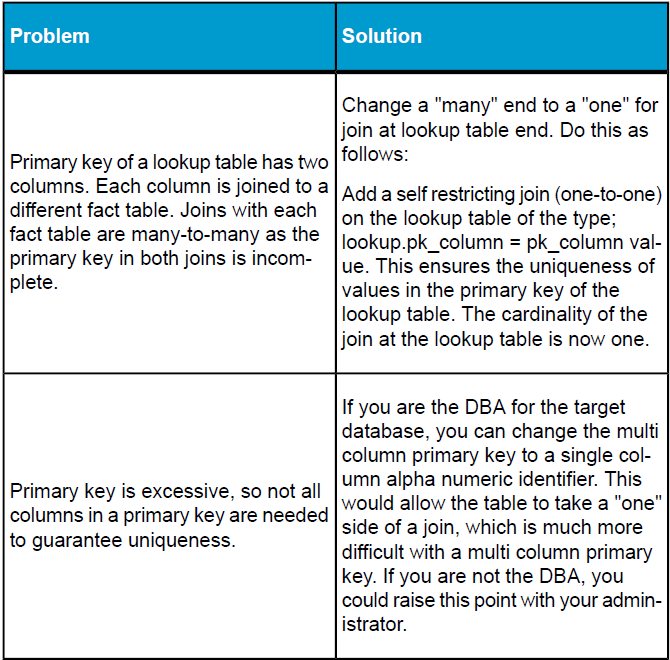 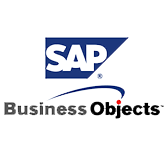