Determining the Cursor Position when Clicking on a Field - SAP BASIS

SAP users can decide how they want the cursor to behave when clicking on the blank area of an input field. For instance, the cursor could automatically position itself at the beginning of the field when the user clicks anywhere in a blank field, or it could position itself to the right of any text already entered in the field, considering blank spaces as if they were nulls. Alternatively, users can decide to leave the normal behavior of the cursor positioning, which is to appear exactly where they place it in the field, whether there are blank spaces or not. Determining the behavior of the cursor positioning depends on the type of tasks users perform most frequently. For example, when the screens they most often use require entering data in many empty fields, it is advisable to make the cursor appear at the end of any text when clicking anywhere behind the text. In such cases, if the input fields are empty, the cursor will position automatically at the beginning of the field, ready for entering data. This is the default setting

The other setting is to place the cursor exactly in the field position that the user clicks on with the mouse, whether the field is empty or not. This is more suitable for making lots of modifications in fields that already contain data and when users move across fields using the arrow keys instead of the TAB or the mouse. Cursor behavior is set by selecting the Cursor tabstrip in the Options menu. In this folder there is a check box with the caption Position cursor to end of text. If this box is checked, the cursor will be positioned at the end of the text of the input field. Otherwise, the cursor will be positioned wherever the user clicks on a field. If you select (check) the option Note Cursor Position in Field at TAB, then the system will position the cursor exactly where you last clicked within an input field.

The option Default Size under the Customizing of Local Layout menu adjusts the size of the SAP GUI window to the default window size. This feature, however, flashes an error message in the status bar if the user does not have the correct windows resolution. And it won't have any effect if the windows still have the default size. The windows size can be changed by following the normal procedures used in any other screen of other windows applications.

You can transfer the contents of fields onto the clipboard of your windows environment and then paste them into other fields of the SAP systems or into other windows applications. You can move or copy the contents of fields by using the functions of the Clipboard option located in the menu. The SAP GUI clipboard functions work very similarly to the clipboard functions of the Windows environment. In many SAP screens and applications, for example, when working with the ABAP editor, you also have copy and paste functions below the Edit menu. However, options under the Edit menu only work inside the SAP system and cannot be transferred to other windows applications. The Edit menu usually contains more extensive options than the clipboard.

The SAP GUI clipboard presents four options: Mark, Copy, Cut, and Paste. The Mark option is useful when selecting several fields to copy and paste. Otherwise, just select a field by clicking and dragging the pointer over the text field and select the most appropriate option. When the Mark option is selected, the cursor changes automatically to a crosshair sign. The selection is made by clicking on a corner of the area to copy and holding the mouse and dragging to the opposite corner. The SAP system will display a rectangle indicating the selected area. In display-only fields (which cannot be changed) you can copy the contents to other fields, but you cannot cut them.

Since latest releases of the SAP GUI, the Customizing of Local Layout menu includes many more advanced options, which are typically set up by system managers and distributed to the end user population because normally they are not used except in special situations. Some of these advanced options are as follows: 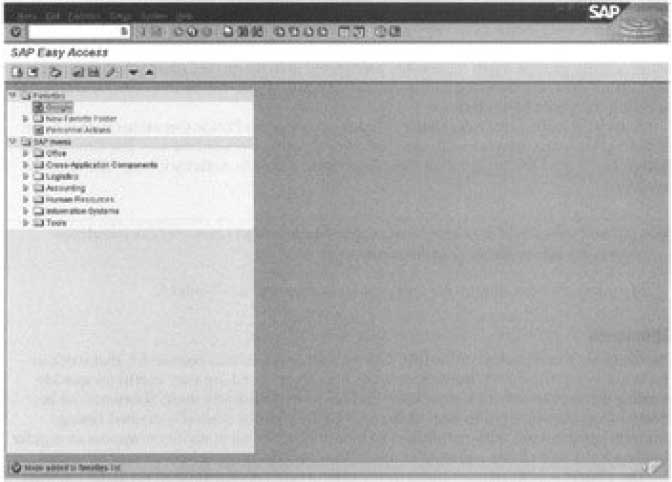 In addition to selecting functions from a Favorites list, User menu, SAP standard menu, or the menu bar, you can still select functions using transaction codes. In order to include other type of objects, such as those from a Knowledge Warehouse, BSP applications, and so on, select Favorites | Add Other Objects from the main menu. Select the appropriate radio button and then enter the appropriate information, such as the title and the link to the actual object you want to include in your list of Favorites.

A growing majority of SAP users are no longer just the professional users. Rather, an ever-increasing percentage of companies' employees are using SAP products as occasional users. Realizing that these occasional users come from different departments and perform different jobs leads to the creation of user roles. Interfaces are tailored to the user in each case, but ultimately use the same back-end functionality. From classical SAP R/3, role-specific scenarios were extended into SAP's New Dimensions and ultimately into all SAP solutions within the mySAP Business Suite and SAP NetWeaver, and a key concept for a proper configuration and deployment of the SAP Enterprise Portal. Yet role-specific scenarios can be individually used in classical SAP GUI-based SAP solutions.

A role describes a set of logically linked transactions. These transactions represent the range of functions users typically need at their workstations. Users who have been assigned to an activity group can choose between the User menu and the SAP standard menu. Selecting the User menu icon displays the User menu in place of the SAP standard menu. The authorizations for the activities listed in the menus are also assigned to the users using activity groups. With release 4.6, predefined activity groups (user roles) from all application areas are included in the standard system. These can be displayed and used by selecting the Other Menu button.

Activity groups (user roles) have to be set up using the Profile Generator so that users of the SAP system can work with user-specific or position-related menus. The Create Role, Assign Users, and Documentation buttons provide access to Activity Group Maintenance functions. Note The availability of the Other Menu, Create Menu, Assign Users, and Documentation buttons depends on the user's authorizations. More information about roles and profiles is provided in Chapter.

Shortcuts are a component of the SAP GUI, available since Basis release 4.5, that work in the Windows platforms (Windows 98, 2000, NT, XP, etc.) and are very useful for quickly running those functions or transactions that are more frequently used. Shortcuts can be created from the standard toolbar of the SAP GUI, or can be manually created (using program sapshcut.exe with parameters). Once they are created, shortcuts appear as regular desktop icons that can be included in other Windows documents or even sent by e-mail.

The easiest way to create a shortcut for a particular application is to go to the required screen with regular SAP menu functions or transaction codes. Once in the transaction for which a shortcut is desired, click on the Create Shortcut icon on the standard toolbar. Enter the requested logon data and click OK. 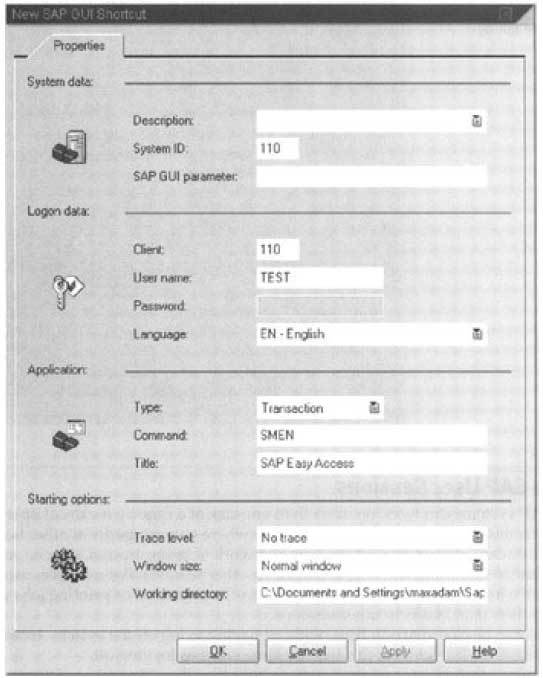 The system automatically creates a SAP shortcut on the user's desktop. To run the SAP shortcut, just double-click on the icon. For security reasons the system will display a dialog box requesting the username and password. After a successful logon, the shortcut will take you automatically to the defined transaction or report. You can also include logon data while creating a new shortcut; however, this is not recommended for security reasons. Shortcuts can also be used in the current SAP GUI sessions, which eliminates having to enter username and password. There are three options:

In every SAP GUI window, users have the option of displaying important information about the System, the user, the transaction, and other data, which can be extremely helpful on many occasions. The Status screen can. be accessed by choosing System | Status from any SAP window. In the Status window, under the Usage data box, you can see what the actual user name, client, language, date, and time are. Most important, though, is the Repository Data, where the system displays the transaction, program, and screen number. This is the way users can locate the transactions they are working on and developers or support personnel can easily locate the specific programs or menus that might have errors. Since SAP GUI release 4.5 and later, part of the status information can also be displayed from the status bar by clicking on the possible entries arrow on the system box. 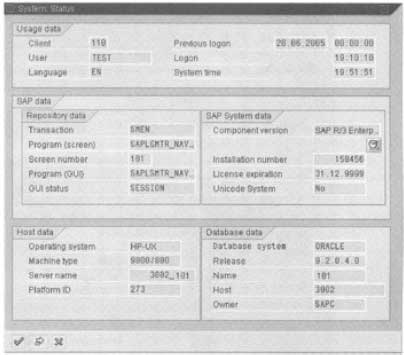 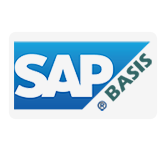