USE OF POSTERIOR PROBABILITIES IN DECISION-MAKING - Quantitative Techniques for management

Example : A manufacturer of detergent soap must determine whether or not to expand his productive capacity. His profit per month, however, depend upon the potential demand for his product which may turn out to be high or low. His payoff matrix is given below:

If the current survey predicts that the demand of his product is going to be high in future, determine whether the manufacturer should increase his production capacity or not? What would have been his decision in the absence of survey?

Let H be the event that the demand will be high. Therefore,

Note that H and

are the only two states of nature.Let D be the event that the survey predicts high demand. Therefore,

We have to find

For this, we make the following table: 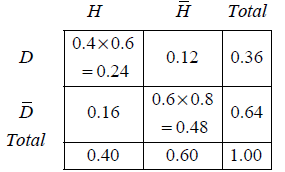 From the above table, we can write

The decision tree diagrams are often used to understand and solve a decision problem. Using such diagrams, it is possible to describe the sequence of actions and chance events. A decision node is represented by a square and various action branches stem from it. Similarly, a chance node is represented by a circle and various event branches stem from it. Various steps in the construction of a decision tree can be summarised as follows:

(i) Show the appropriate action-event sequence beginning from left to right of the page.
(ii) Write the probabilities of various events along their respective branches stemming from each chance node.
(iii) Write the payoffs at the end of each of the right-most branch.
(iv) Moving backward, from right to left, compute EMV of each chance node, wherever encountered. Enter this EMV in the chance node. When a decision node is encountered, choose the action branch having the highest EMV. Enter this EMV in the decision node and cutoff the other action branches.

Following this approach, we can describe the decision problem of the above example as given below:

Case I: When the survey predicts that the demand is going to be high

Case II: In the absence of survey

Thus, the optimal act is not to expand capacity.