As an underlying mechanism that produces the normal distribution, we can think of an infinite number of independent random (binomial) events that bring about the values of a particular variable. For example, there are probably a nearly infinite number of factors that determine a person's height (thousands of genes, nutrition, diseases, etc.). Thus, height can be expected to be normally distributed in the population.

Since Gauss used this curve to describe the theory of accidental errors of measurements involved in the calculation of orbits of heavenly bodies, it is also called as Gaussian curve.

The Conditions of Normality

In order that the distribution of a random variable X is normal, the factors affecting its observations must satisfy the following conditions:

Random variables observed in many phenomena related to economics, business and other social as well as physical sciences are often found to be distributed normally. For example, observations relating to the life of an electrical component, weight of packages, height of persons, income of the inhabitants of certain area, diameter of wire, etc., are affected by a large number of factors and hence, tend to follow a pattern that is very similar to the normal curve.

In addition to this, when the number of observations become large, a number of probability distributions like Binomial, Poisson, etc., can also be approximated by this distribution.

If X is a continuous random variable, distributed normally with mean m and standard deviation s , then its p.d.f. is given by

For given values of the parameters, m and s, the shape of the curve corresponding to normal probability density function p(X) is as shown in Figure.

It should be noted here that although we seldom encounter variables that have a range from - ∞ to ∞, as shown by the normal curve, nevertheless the curves generated by the relative frequency histograms of various variables closely resembles the shape of normal curve.

A normal probability curve or normal curve has the following properties:

Probability of Normal Variate in an Interval

Let X be a normal variate distributed with mean m and standard deviation s, also written in abbreviated form as X ~ N(m, s) The probability of X lying in the interval (X1, X2) is given by 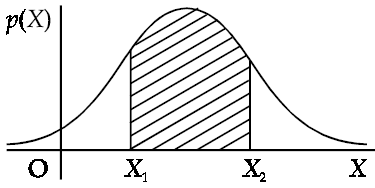 In terms of figure, this probability is equal to the area under the normal curve between the ordinates at X = X1 and X = X2 respectively.

Note: It may be recalled that the probability that a continuous random variable takes a particular value is defined to be zero even though the event is not impossible.

It is obvious from the above that, to find P(X1≤X ≤ X2), we have to evaluate an integral which might be cumbersome and time consuming task. Fortunately, an alternative procedure is available for performing this task. To devise this procedure, we define a new variable z= X-µ/ σ.

Further, from the reproductive property, it follows that the distribution of z is also normal. 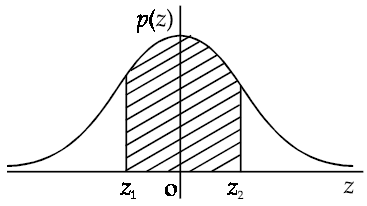 In terms of figure, this probability is equal to the area under the standard normal curve between the ordinates at z = z1 and z = z2.

Since the distribution of z is fixed, the probabilities of z lying in various intervals are tabulated. These tables can be used to write down the desired probability.

Example: Using the table of areas under the standard normal curve, find the following probabilities :

Solution: The required probability, in each question, is indicated by the shaded are of the corresponding figure. 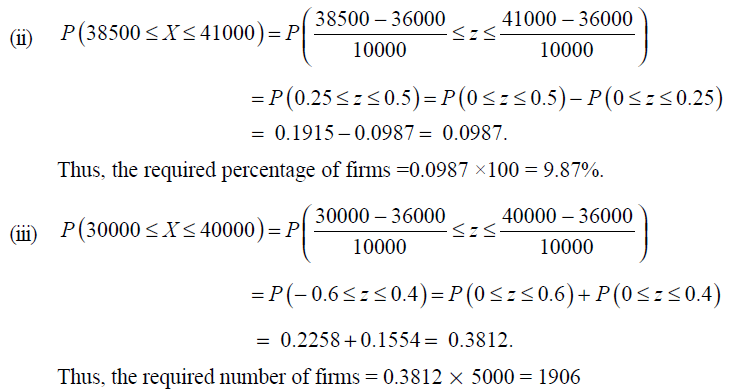 Solution: Let the mean and standard deviation of the given distribution be mand srespectively. 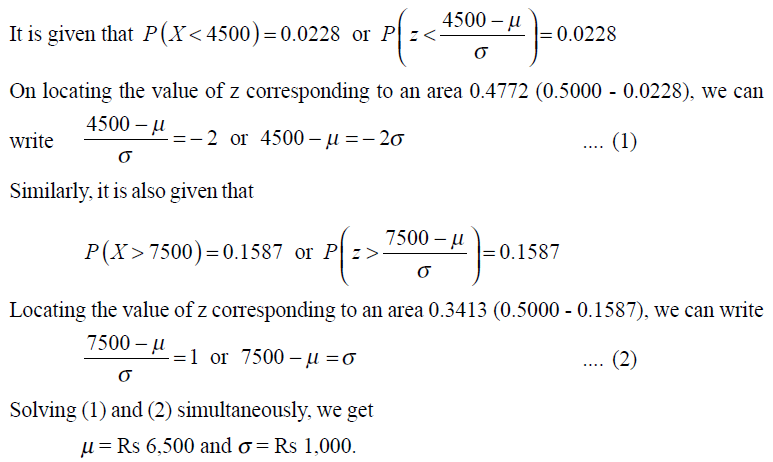 Example : Marks in an examination are approximately normally distributed with mean 75 and standard deviation 5. If the top 5% of the students get grade A and the bottom 25% get grade F, what mark is the lowest A and what mark is the highest F?

Example : The mean inside diameter of a sample of 200 washers produced by a machine is 5.02 mm and the standard deviation is 0.05 mm. The purpose for which these washers are intended allows a maximum tolerance in the diameter of 4.96 to 5.08 mm, otherwise the washers are considered as defective. Determine the percentage of defective washers produced by the machine on the assumption that diameters are normally distributed. 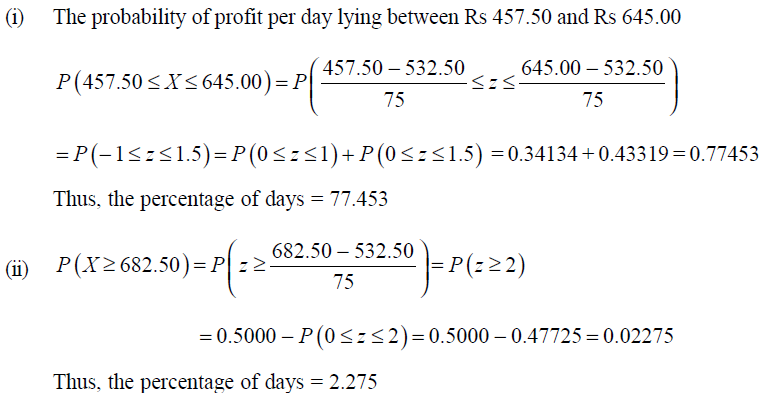 Example : The distribution of 1,000 examinees according to marks percentage is given below:

Assuming the marks percentage to follow a normal distribution, calculate the mean and standard deviation of marks. If not more than 300 examinees are to fail, what should be the passing marks?

Solution: Let X denote the percentage of marks and its mean and S.D. be mand s respectively. From the given table, we can write 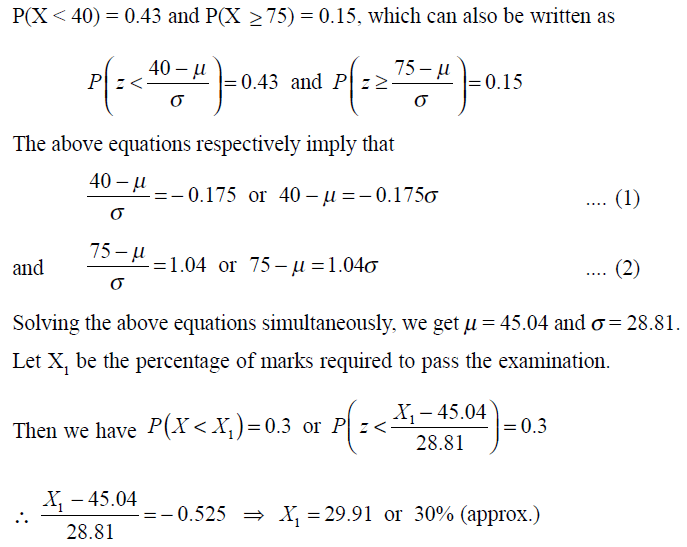 Example : In a certain book, the frequency distribution of the number of words per page may be taken as approximately normal with mean 800 and standard deviation 50. If three pages are chosen at random, what is the probability that none of them has between 830 and 845 words each?

The probability that a page, select at random, does not have number of words between 830 and 845, is given by

Example : At a petrol station, the mean quantity of petrol sold to a vehicle is 20 litres per day with a standard deviation of 10 litres. If on a particular day, 100 vehicles took 25 or more litres of petrol, estimate the total number of vehicles who took petrol from the station on that day. Assume that the quantity of petrol taken from the station by a vehicle is a normal variate.

Normal distribution can be used as an approximation to binomial distribution when n is large and neither p nor q is very small. If X denotes the number of successes with probability p of a success in each of the n trials, then X will be distributed approximately normally with mean np and standard deviation √ npq.

ICorrection for Continuity
Since the number of successes is a discrete variable, to use normal approximation, we have make corrections for continuity.

Example : An unbiased die is tossed 600 times. Use normal approximation to binomial to find the probability obtaining

The fittings of Normal distribution problems are given below

A normal curve is fitted to the observed data with the following objectives:

1. To provide a visual device to judge whether it is a good fit or not.
2. Use to estimate the characteristics of the population.

The fitting of a normal curve can be done by

(a) Method of Ordinates: In this method, the ordinate f(X) of the normal curve, for various values of the random variate X are obtained by using the table of ordinates for a standard normal variate.

Example : Fit a normal curve to the following data : 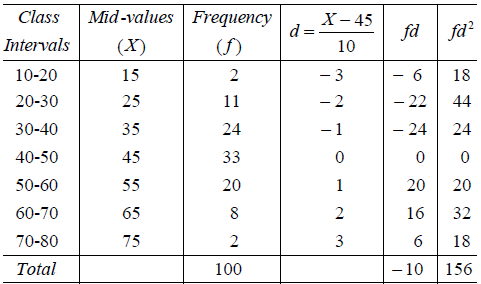 Note: If the class intervals are not continuous, they should first be made so.

(b) Method of Areas: Under this method, the probabilities or the areas of the random variable lying in various intervals are determined. These probabilities are then multiplied by N to get the expected frequencies. This procedure is explained below for the data of the above example.