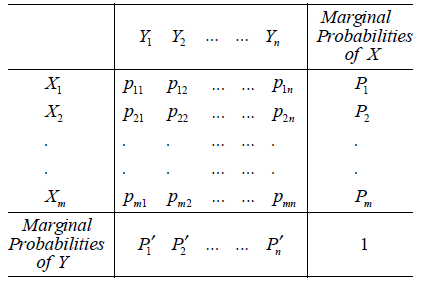 Similarly, the marginal probabilities of the random variable Y are given in the last row of the above table.

Remarks: If X and Y are independent random variables, then by multiplication theorem of probability we have P(X = Xi and Y = Yi) = P(X = Xi).P(Y = Yi) ∀ i and j
Using notations, we can write pij= Pi.P j´

The above relation is similar to the relation between the relative frequencies of independent attributes.

This gives us a conditional probability distribution of X given that Y = Y1. This distribution can be written in a tabular form as shown below: 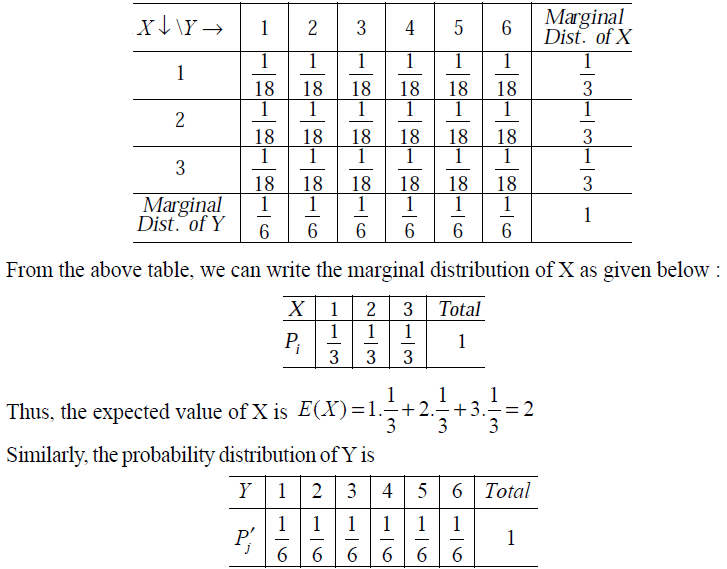 The conditional distribution of X when Y = 5 is 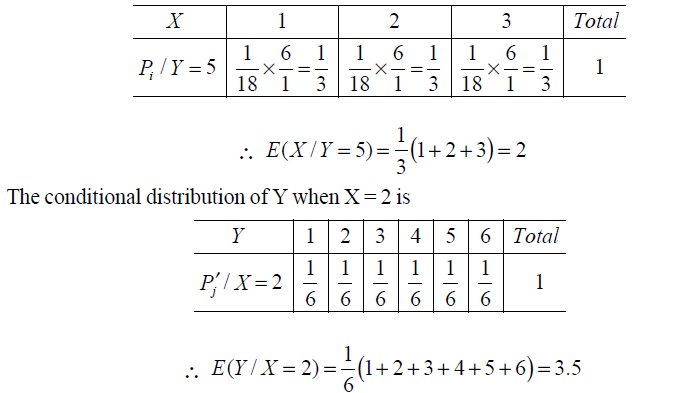 Solution: There are 4 elements in the sample space of the random experiment. The possible values that X can take are 0, 1 and 2 and the possible values of Y are 0 and 1. The joint probability distribution of X and Y can be written in a tabular form as follows: 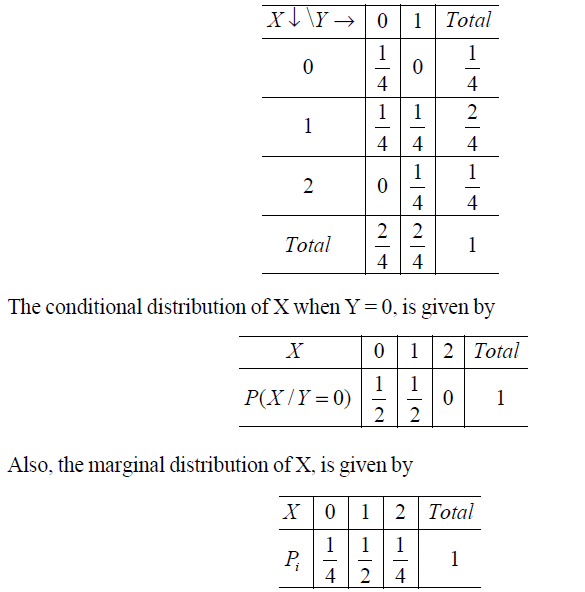 Since the conditional and the marginal distributions are different, X and Y are not independent random variables.

Expectation of the Sum or Product of two Random Variables

By definition of expectation, we can write

Remarks: The above result holds irrespective of whether X1, X2, ...... Xk are independent or not.

The above expression, which is the mean of the product of deviations of values from their respective means, is known as the Covariance of X and Y denoted as Cov(X, Y) or

Remarks: If X and Y are independent random variables, the right hand side of the above equation will be zero. Thus, covariance between independent variables is always equal to zero.

II. Mean and Variance of a Linear Combination

Let Z =Φ (X,Y ) = aX + bY be a linear combination of the two random variables X and Y, then using the theorem of addition of expectation, we can write

Further, the variance of Z is given by

1. The general result on expectation of the sum or difference will hold even if the random variables are not independent.
2. The result can also be proved for continuous random variables.

Example: A random variable X has the following probability distribution :

Solution: Since the total probability under a probability distribution is equal to unity, the value of p should be such that 1/6+p+1/4+p+1/6=1.

Example : A person applies for equity shares of Rs 10 each to be issued at a premium of Rs 6 per share; Rs 8 per share being payable along with the application and the balance at the time of allotment. The issuing company may issue 50 or 100 shares to those who apply for 200 shares, the probability of issuing 50 shares being 0.4 and that of issuing 100 shares is 0.6.

In either case, the probability of an application being selected for allotment of any shares is 0.2 The allotment usually takes three months and the market price per share is expected to be Rs 25 at the time of allotment. Find the expected rate of return of the person per month.

The probability that he is allotted 50 shares

The probability that he is allotted 100 shares

Since X and Y are independent, we can write

Example : It costs Rs 600 to test a machine. If a defective machine is installed, it costs Rs 12,000 to repair the damage resulting to the machine. Is it more profitable to install the machine without testing if it is known that 3% of all the machines produced are defective? Show by calculations.

Since E(X) is less than Rs 600, the cost of testing the machine, hence, it is more profitable to install the machine without testing.