The harmonic mean of n observations, none of which is zero, is defined as the reciprocal of the arithmetic mean of their reciprocals. 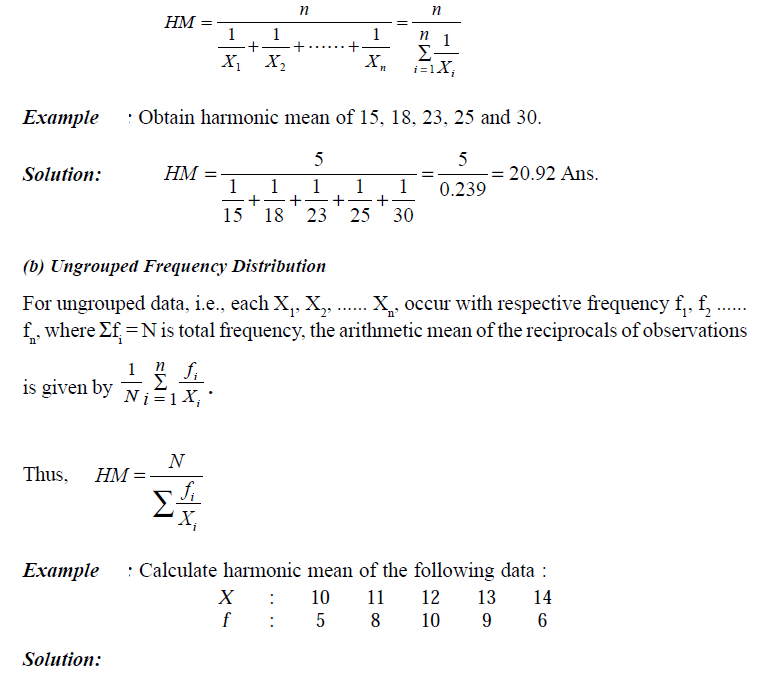 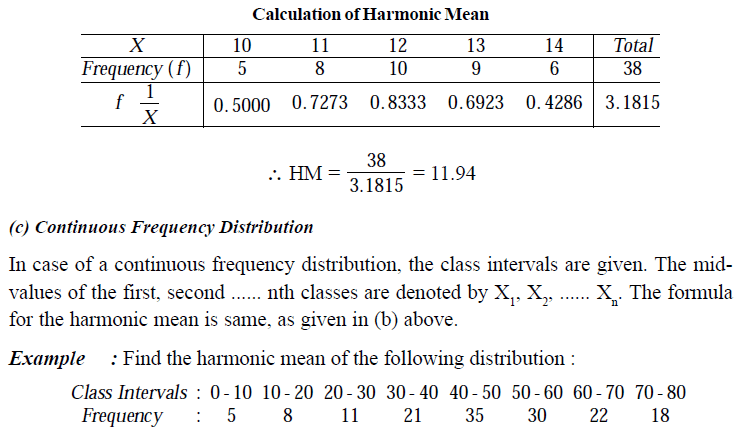 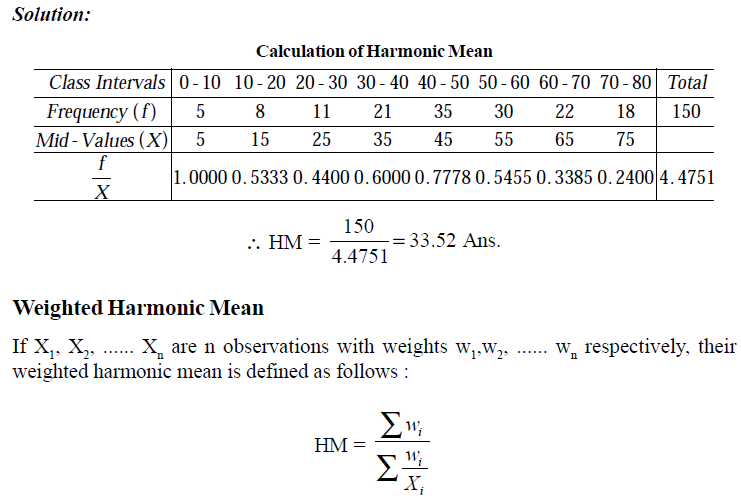 Similarly 60/50 and 40/60 are time taken by the train in travelling 60 kms and 40 kms at the speeds of 50 kms./hour and 60 kms/hour respectively. Hence, weighted harmonic mean is most appropriate average in this case.

Example : Ram goes from his house to office on a cycle at a speed of 12 kms/hour and returns at a speed of 14 kms/hour. Find his average speed.
Solution: Since the distances of travel at various speeds are equal, the average speed of Ram will be given by the simple harmonic mean of the given speeds.

The harmonic mean, like arithmetic mean, is also used in averaging of rates like price per unit, kms per hour, work done per hour, etc., under certain conditions. To explain the method of choosing an appropriate average, consider the following illustration.

which is arithmetic mean of the prices in three years.

Further, if we take harmonic mean of the given prices, i.e.

it will denote the average price when equal amounts of money are spent on the commodity in three years. To verify this let us assume that Rs 100 is spent in each year on the purchase of the commodity.

Next, we consider a situation where different quantities are purchased in the three years. Let us assume that 10, 15 and 20 units of the commodity are purchased at prices of Rs 3, 4 and 5 respectively.

which is weighted arithmetic mean of the prices taking respective quantities as weights. Further, if Rs 150, 200 and 250 are spent on the purchase of the commodity at prices of Rs 3, 4 and 5 respectively, then

purchased in respective situations. The above average price is equal to the weighted harmonic mean of prices taking money spent as weights.

Therefore, to decide about the type of average to be used in a given situation, the first step is to examine the rate to be averaged. It may be noted here that a rate represents a ratio, e.g., price = money/quantity, speed = distance/time , work done per hour = work done/time taken , etc.

Example : An individual purchases three qualities of pencils. The relevant data are given below:

Example : In a 400 metre athlete competition, a participant covers the distance as given below. Find his average speed.

Solution: Since the rate to be averaged is speed= (Distance/time) and the conditions are given in terms of time, therefore AM will be appropriate. Further, since Peter travelled for equal number of hours on each of the four days, simple AM will be calculated.

Solution: Here the rate to be averaged is time taken to complete a unit of work, i.e., time/units of work done . Since we have to determine the average with reference to a (six hours) day, therefore, HM of the rates will give us appropriate average.

Thus, the average rate of working =

Solution: The rate to be averaged is expressed as Money/litre
(i) Since the condition is given in terms of different litres of petrol in three years, therefore, weighted AM will be appropriate

Merits and Demerits of Harmonic Mean

Relationship among AM, GM and HM

If all the observations of a variable are same, all the three measures of central tendency coincide, i.e., AM = GM = HM. Otherwise, we have AM > GM > HM.

Example : Show that for any two positive numbers a and b, AM ³ GM ³ HM.

Solution: The three averages of a and b are: 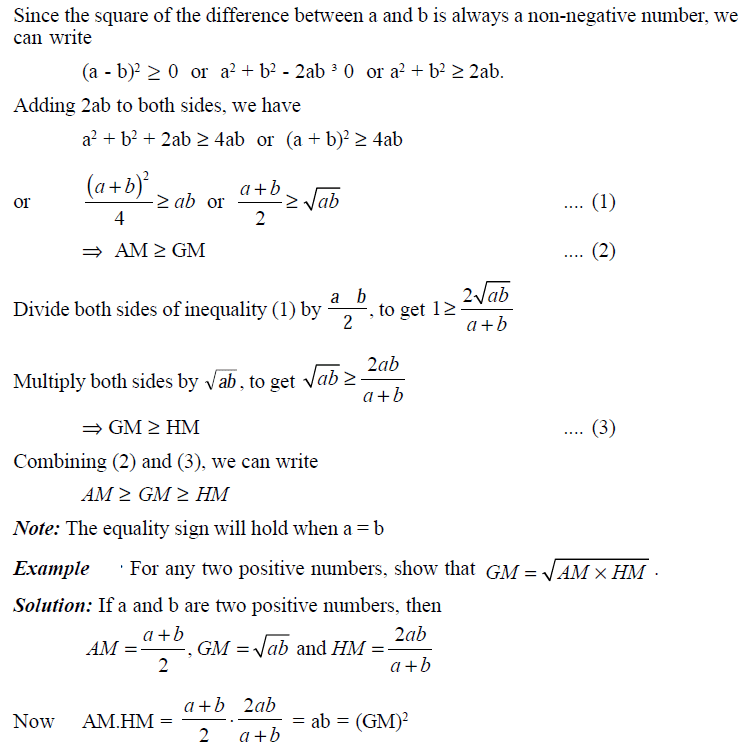 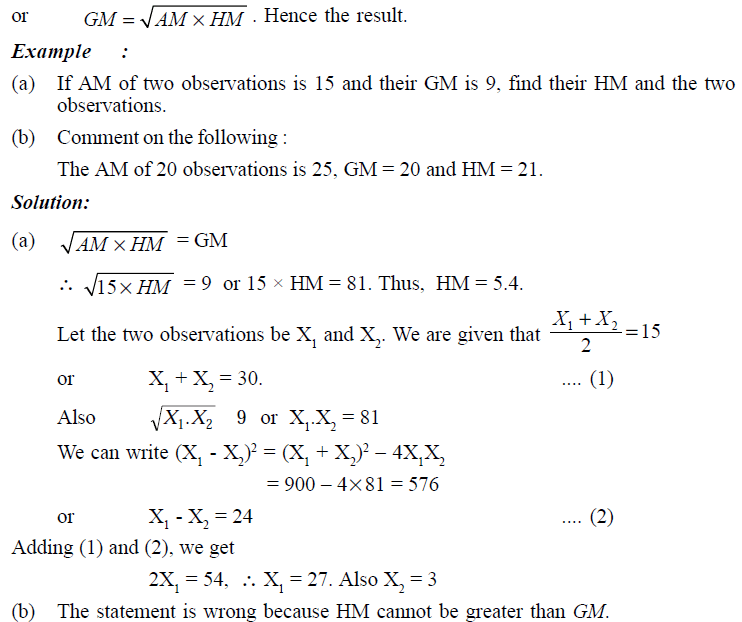 This is a special type of average used to eliminate periodic fluctuations from the time series data.

A progressive average is a cumulative average which is computed by taking all the available figures in each succeeding years. The average for different periods is obtained as shown below:

This average is often used in the early years of a business.

Probability Distribution Of A Random Variable