In case of pay-off matrices larger than 2 × 2 size, the dominance property can be used to reduce the size of the pay-off matrix by eliminating the strategies that would never be selected.

The dominance principle in game theory problems are explained below

Example : Solve the game given below in Table after reducing it to 2 × 2 game:

Solution: Reduce the matrix by using the dominance property. In the given matrix for player A, all the elements in Row 3 are less than the adjacent elements of Row 2. Strategy 3 will not be selected by player A, because it gives less profit for player A. Row 3 is dominated by Row 2. Hence delete Row 3, as shown in table.

For Player B, Column 3 is dominated by column 1 (Here the dominance is opposite because Player B selects the minimum loss). Hence delete Column 3. We get the reduced 2 × 2 matrix as shown below in table. 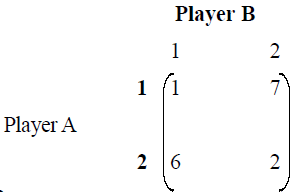 Now, solve the 2 × 2 matrix, using the maximin criteria as shown below in table. 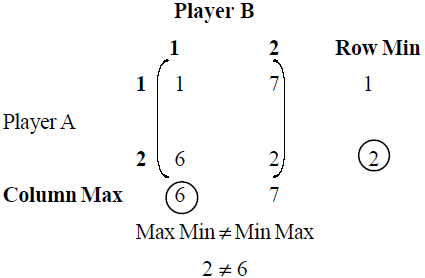 Therefore, there is no saddle point and the game has a mixed strategy. Applying the probability formula,

The optimum strategies are shown in table

Example : Is the following two-person zero-sum game stable? Solve the game given below in table.

Solution: Solve the given matrix using the maximin criteria as shown in table.

Therefore, there is no saddle point and hence it has a mixed strategy.

When comparing column wise, column 2 is dominated by column 4. For Player B, the minimum profit column is column 2, hence delete column 2. The matrix is further reduced as shown in table. 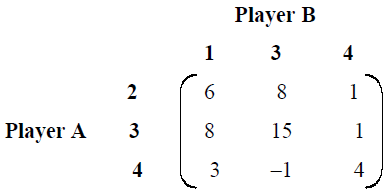 Now, as when comparing rows and columns, no column or row dominates the other. Since there is a tie while comparing the rows or columns, take the average of any two rows and compare. We have the following three combinations of matrices as shown in table.

The strategy for the arrived matrix is a mixed strategy; using probability formula, we find p1, p2 and q1, q2.

The optimum mixed strategies are given below in table.

Probability Distribution Of A Random Variable