A network diagram allows you to show the tasks of the project in the order they'll be performed—in other words, in sequential order. A network diagram is a graphical view of the project starting with initiation as the left-most element followed by all the project tasks or deliverables in the order they should be worked. Some tasks have dependencies like those we discussed in the last section, and some are stand-alone. The stand-alone tasks are often worked at the same time as other stand-alone tasks unless, of course, you're the only resource working on the project. Then you have no choice but to work one task after the other in sequential order. Most projects have more than one resource, though, and that means that those stand-alone tasks can be worked at the same time by different resources.

The network diagram allows you to visually construct and link the tasks the way they should be worked. It's also a great graphic to hang in the project team meeting room to show your progress.

You may be thinking that we did all this with the WBS. Not really. The WBS is in a hierarchical layout, not a sequential layout. For example, if you refer back to our WBS example, you'll see that "Prepare content" and "Prepare media" are two different deliverables displayed in a hierarchy. However, based on our previous discussion of dependencies, you can see that the "Print materials" task cannot (or should not) be done before the "Review content" task is completed. Since these tasks are listed under separate deliverables, there isn't a good way on the WBS to show their dependencies. While all the tasks under each of these deliverables are ordered logically, they aren't shown in dependency order. A network diagram allows us to show the flow, or sequence of tasks.

Note:A WBS does a much better job of displaying milestones and deliverables than a network diagram does. A network diagram is better at showing the sequence of tasks, so both of these tools have their place in the project planning process.

Precedence diagramming is simply plotting the tasks in a diagram format in the right order according to their dependencies. This is also known as activity on node, which we'll cover in coming topics. Precedence occurs when one task cannot be started until a previous task finishes, such as the "Load software" task we talked about earlier. The "Install power strips" task has precedence over this task because it must be finished before the next task can start.

The numbers in the diagram are a way to identify the tasks. The numbers are not in sequential order; they're just a way to identify each task. Here, I've added two new tasks: number 10, "Test," and number 11, "Sign-off." For the sake of this example, we'll assume that the "Review" task, number 7, means a grammatical review of the text, while the "Test" task means that testers must work through each exercise in the manual to make certain they can understand them. The "Print media" task now has two tasks that must be completed before it can begin. Task number 7, "Review," and task number 11, "Sign-off," must both be completed before "Print media" can begin. Remember that "Sign-off" also has a dependency. The "Test" task must be completed before "Sign-off" can be obtained.

You can see how a network diagram is a terrific tool to visualize the progress of the project. You can view the project in one graph (maybe two or three or more if the project is complex), determine how the work of the project must be performed, and see what dependencies exist between the tasks. As you progress, you can indicate on the network diagram itself which tasks have been completed by checking them off or coloring them, etc.

Activity on node (AON) is a precedence diagramming method that uses circles, called nodes, to depict the tasks, and arrows to show the dependencies between the tasks. AON diagrams can be constructed with boxes as nodes like we saw in the previous section. In the example shown next, a sample portion of the activities, or tasks from our annual conference project, are placed on the nodes, and the arrows show the dependency between the tasks

This example shows the "Print media" task dependent on the completion of the "Sign-off" and "Review" tasks. You could add more detail to this diagram by showing the duration estimates on the arrows for a clearer picture of how long each task should take.

Activity on arrow (AOA) is the opposite of the AON diagram. It also uses nodes and arrows like the AON, but in this case, the arrows depict the activities or tasks and the nodes indicate milestones or deliverables or simply events between the activities.

Precedence diagrams are the easiest type to construct and the most often used. If you can draw boxes and straight lines, you can assemble a precedence diagram. I encourage you to draw a network diagram for your project and display it, along with the WBS, in the project team meeting room. 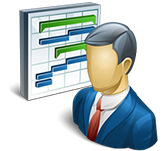