PLC manufacturers differ on how timers should be programmed and hence how they can be considered. A common approach is to consider timers to behave like relays with coils that when energized, result in the closure or opening of contacts after some preset time. The timer is thus treated as an output for a rung, with control being exercised over pairs of contacts else where. This is the predominant approach used in this book. Some treat a timer as a delay block that when inserted in a rung, delays signals in that rung from reaching the output.

There are a number of different forms of timers that can be found with PLCs: on-delay, off delay and pulse. With small PLCs there is likely to be just one form, the on-delay timers.Figure shows the IEC symbols. TON is used to denote on-delay, TOF off-delay, and TP pulse timers. On-delay is also represented by TÀ0 and off-delay by 0ÀT.

On-delay timers (TON) come on after a particular time delay. Thus as the input goes from 0 to 1, the elapsed time starts to increase, and when it reaches the time specified by the input PT, the output goes to 1. An off-delay timer (TOF) is on for a fixed period of time before turning off. The timer starts when the input signal changes from 1 to 0. Another type of timer is the pulse timer (TP). This timer gives an output of 1 for a fixed period of time, starting when the input goes from 0 to 1 and switching back to 0 when the set time PT has elapsed. 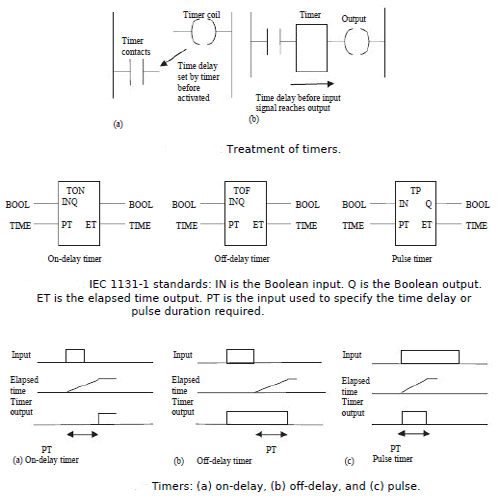