Pulse timers are used to produce a fixed-duration output from some initiating input.

Figure shows a ladder diagram for a system that will give an output from Out 1 for a predetermined fixed length of time when there is an input to In 1, the timer being one involving a coil. There are two outputs for the input In 1. When there is an input to In 1, there is an output from Out 1 and the timer starts. When the predetermined time has elapsed,the timer contacts open. This switches off the output. Thus the output remains on for only the time specified by the timer.

Figure shows an equivalent ladder diagram to Figure but employs a timer that produces a delay in the time taken for the signal to reach the output. 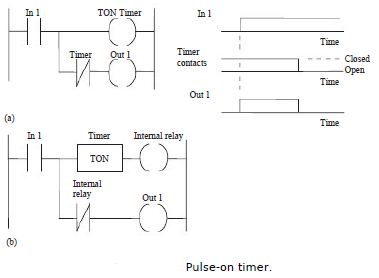 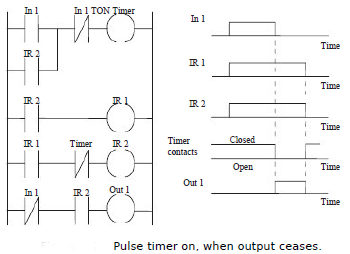 When there is an input to In 1, the internal relay IR 1 is energized. The timer does not start at this point because the normally closed In 1 contacts are open. The closing of the IR 1 contacts means that the internal relay IR 2 is energized. There is, however, no output from Out 1 at this stage because, for the bottom rung, we have In 1 contacts open. When the input to In 1 ceases, both the internal relays remain energized and the timer is started. After the set time, the timer contacts, which are normally closed, open and switch off IR 2. This in turn switches off IR 1. It also, in the bottom rung, switches off the output Out 1.

Thus the output is off for the duration of the input, then is switched on for a predetermined length of time.