The output ports of a PLC are relay or opto isolator with transistor or triac, depending on the devices that are to be switched on or off. Generally, the digital signal from an output channel of a PLC is used to control an actuator, which in turn controls some process. The term actuator is used for the device that transforms the electrical signal into some more powerful action, which then results in control of the process. The following are some examples.

When a current passes through a solenoid, a magnetic field is produced; this can then attract ferrous metal components in its vicinity. With the relay, this attraction is used to operate a switch. Relays can thus be used to control a larger current or voltage and, additionally, to isolate the power used to initiate the switching action from that of the controlled power. Fora relay connected to the output of a PLC, when the output switches on, the solenoid magnetic field is produced, and this pulls on the contacts and so closes a switch or switches(Figure). The result is that much larger currents can be switched on. Thus the relay might be used to switch on the current to a motor. The solenoid of a relay might be used to operate more than one set of contacts, the term pole being used for each set of contacts.

Contacts can also be obtained as, in the absence of any input, either normally open (NO) or normally closed (NC). Thus, when selecting relays for a particular application, consideration has to be given to the number of poles required, the initial contact conditions, and the rated voltage and current

The term latching relay is used for a relay whose contacts remain open or closed even after the power has been removed from the solenoid. The term contact or is used when large currents are being switched from large voltage sources.

Another example of the use of a solenoid as an actuator is a solenoid operated valve. The valve may be used to control the directions of flow of pressurized air or oil and so used to operate other devices, such as a piston moving in a cylinder. Figure shows one such form, a spool valve, used to control the movement of a piston in a cylinder. Pressurized air or hydraulic fluid is input from port P, which is connected to the pressure supply from a pump or compressor, and port T is connected to allow hydraulic fluid to return to the supply tank or, in the case of a pneumatic system, to vent the air to the atmosphere. With no current through the solenoid, the hydraulic fluid or pressurized air is fed to the right of the piston and exhausted from the left, the result then being the movement of the piston to the left. When a current is passed through the solenoid, the spool valve switches the hydraulic fluid or pressurized air to the left of the piston and exhausts it from the right. The piston then moves to the right. The movement of the piston might be used to push a deflector to deflect items off a conveyor belt or implement some other form of displacement that requires power. With the preceding valve the two control positions are shown in Figures. 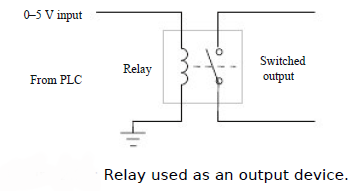 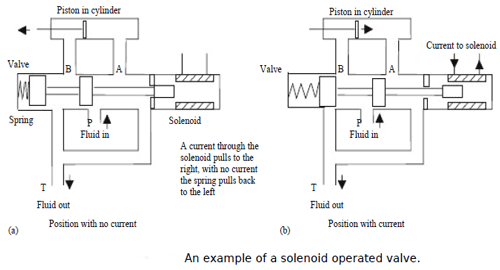 Directional control valves are described by the number of ports and the number of control positions they contain. The valve shown in Figure has four ports—A, B, P, and T—and two control positions. It is thus referred to as a 4/2 valve. The basic symbol used on drawings for valves is a square, with one square used to describe each of the control positions. Thus the symbol for the valve in Figure consists of two squares. Within each square the switching positions are then described by arrows to indicate a flow direction, or a terminated line to indicate no flow path.

Pipe connections, that is, the inlet and output ports, for a valve are indicated by lines drawn outside the box and are drawn for just the box representing the un actuated or rest position for the valve. Figure shows this for the valve shown in Figure. Figure shows more examples of direction valves and their switching positions.

In diagrams, the actuation methods used with valves are added to the symbol; Figure shows examples of such symbols. The valve shown in Figure has a spring to give one position and a solenoid to give the other, so the symbol is as shown in Figure. 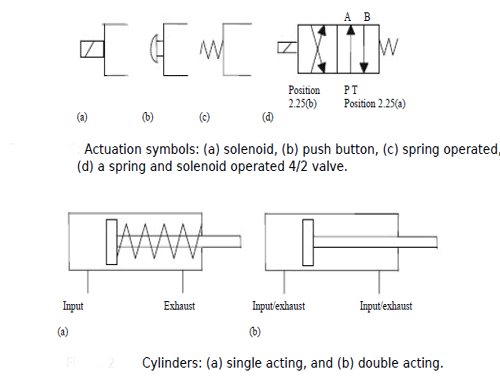 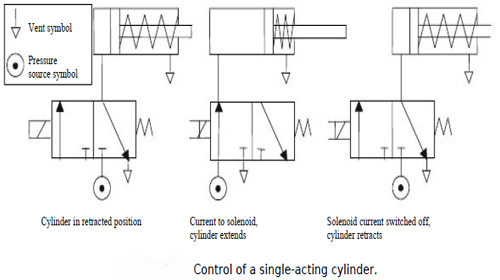 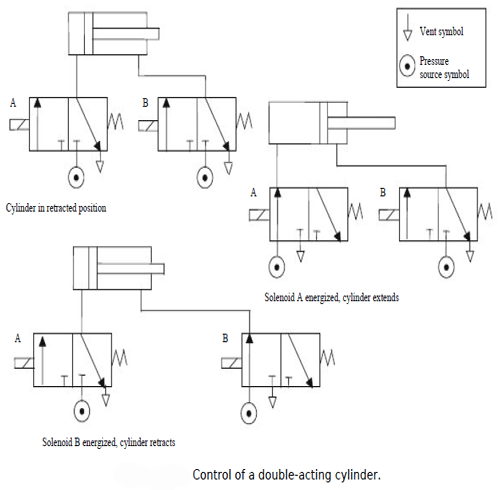 A DC motor has coils of wire mounted in slots on a cylinder of ferromagnetic material, which is termed the armature. The armature is mounted on bearings and is free to rotate. It is mounted in the magnetic field produced by permanent magnets or current passing through coils of wire, which are called the field coils. When a current passes through the armature coil, forces act on the coil and result in rotation. Brushes and a commutator are used to reverse the current through the coil every half rotation and so keep the coil rotating. The speed of rotation can be changed by changing the size of the current to the armature coil.

However, because fixed voltage supplies are generally used as the input to the coils, the required variable current is often obtained by an electronic circuit. This can control the average value of the voltage, and hence current, by varying the time for which the constant DC voltage is switched on (Figure ). The term pulse width modulation (PWM) is used because the width of the voltage pulses is used to control the average DC voltage applied to the armature. A PLC might thus control the speed of rotation of a motor by controlling the electronic circuit used to control the width of the voltage pulses. 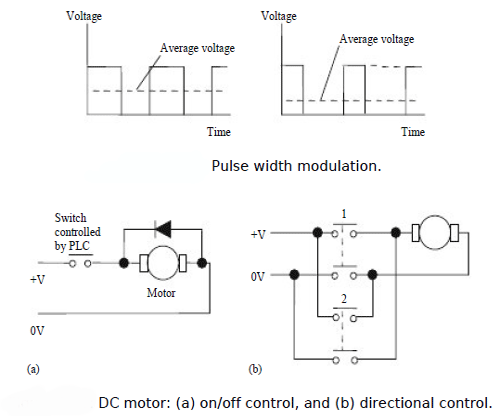 Many industrial processes only require the PLC to switch a DC motor on or off. This might be done using a relay. Figure a shows the basic principle. The diode is included to dissipate the induced current resulting from the back EMF.

Another form of DC motor is the brush less DC motor. This uses a permanent magnet for the magnetic field, but instead of the armature coil rotating as a result of the magnetic field of the magnet, the permanent magnet rotates within the stationary coil. With the conventional DC motor, a commutator has to be used to reverse the current through the coil every half rotation to keep the coil rotating in the same direction. With the brush less permanent magnet motor, electronic circuitry is used to reverse the current. The motor can be started and stopped by controlling the current to the stationary coil. Reversing the motor is more difficult, as reversing the current is not so easy, due to the electronic circuitry used for the commutator function. One method that is used is to incorporate sensors with the motor to detect the position of the north and south poles. These sensors can then cause the current tothe coils to be switched at just the right moment to reverse the forces applied to the magnet.

The speed of rotation can be controlled using pulse width modulation, that is, controlling the average value of pulses of a constant DC voltage.

Though AC motors are cheaper, more rugged, and more reliable than DC motors,maintaining constant speed and controlling that speed is generally more complex than with DC motors. As a consequence, DC motors, particularly brush less permanent magnet motors,tend to be more widely used for control purposes. 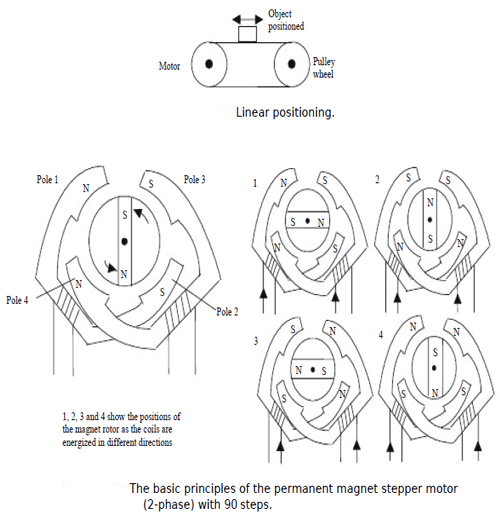 There are two basic forms of stepper motor the permanent magnet type, with a permanent magnet rotor, and the variable reluctance type, with a soft steel rotor. There is also a hybrid form combining both the permanent magnet and variable reluctance types. The most common type is the permanent magnet form.Figure shows the basic elements of the permanent magnet type with two pairs of stat or poles. Each pole is activated by a current being passed through the appropriate field winding,the coils being such that opposite poles are produced on opposite coils. The current is supplied from a DC source to the windings through switches. With the currents switched through the coils such that the poles are as shown in Figure, the rotor will move to lineup with the next pair of poles and stop there. This would be a rotation of 90 . If the current is then switched so that the polarities are reversed, the rotor will move a step to line up with the next pair of poles, at angle 180 , and stop there. The polarities associated with each step areas follows:

Figure shows the basic principle of the variable reluctance type. The rotor is made of soft steel and has a number of teeth, the number being less than the number of poles on the stat or. The stat or has pairs of poles, each pair of which is activated and made into an electromagnet by a current being passed through the coils wrapped round it. When one pair of poles is activated, a magnetic field is produced that attracts the nearest pair of rotor teeth so that the teeth and poles line up. This is termed the position of minimum reluctance. By then switching the current to the next pair of poles, the rotor can be made to rotate to line up with those poles. Thus by sequentially switching the current from one pair of poles to the next, the rotor can be made to rotate in steps. There is another version of the stepper motor—the hybrid stepper. This version combines features of both the permanent magnet and variable reluctance motors. Hybrid steppershavea permanent magnet rotor encased in iron caps that are cut to have teeth. The rotor sets itself in the minimum reluctance position when a pair of stat or coils are energized.

The following are some of the terms commonly used in specifying stepper motors: 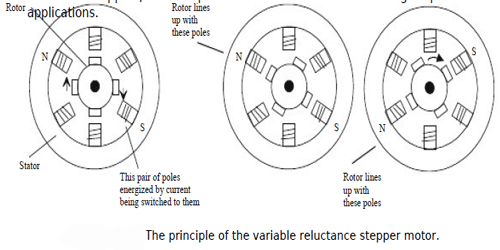 To drive a stepper motor so that it proceeds step by step to provide rotation requires each pair of stat or coils to be switched on and off in the required sequence when the input is a sequence of pulses (Figure). Driver circuits are available to give the correct sequencing. Figure shows an example: the SAA 1027 for a four-phase uni polar stepper. Motors are termed uni polar if they are wired so that the current can flow in only one direction through any particular motor terminal; they’re called bipolar if the current can flow in either direction through any particular motor terminal. The stepper motor will rotate through one step each time the trigger input goes from low to high. The motor runs clockwise when the rotation input is low and anticlockwise when high. When the set pin is made low, the output resets. Ina control system, these input pulses might be supplied by a microprocessor. 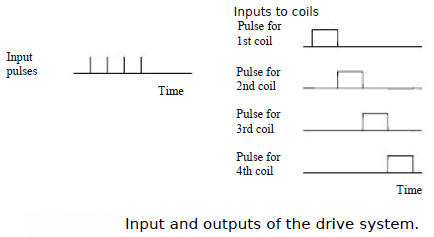 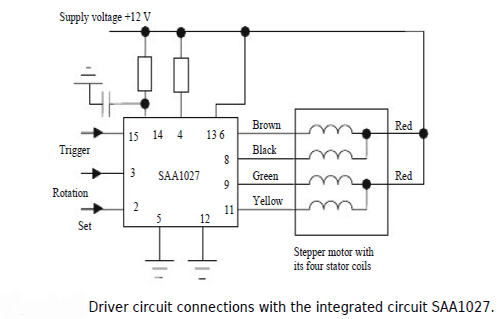