All PLCs generally have on-delay timers; small PLCs possibly have only this type of timer.Figure shows a ladder rung diagram involving a on-delay timer. Figure is typical of Mitsubishi. The timer is like a relay with a coil that is energized when input In 1 occurs(rung 1). It then closes, after some preset time delay, its contacts on rung 2. Thus the output occurs some preset time after input In 1 occurs. Figure, an example of a possible Siemens setup, shows the timer to be a delay item in a rung, rather than a relay. When the signal at the timer’s start input changes from 0 to 1, the timer starts and runs for the programmed duration, giving its output then to the output coil. The time value (TV) output can be used to ascertain the amount of time remaining at any instant. A signal input of 1 at the reset input resets the timer whether it is running or not. Techniques for the entry of preset time values vary. Often it requires the entry of a constant K command followed by the time interval in multiples of the time base used. Figures show ladder diagrams for Telemecanique, Toshiba, and Allen-Bradley, respectively. The Allen-Bradley timer symbol shows the type of timer concerned, the timer address, and the time base that indicates the increments by which the timer moves to the preset value, such as0.001 s, 0.01 s, 0.1 s or 1 s. The preset value (PRE) is the number of time increments that the timer must accumulate to reach the required time delay, and the accumulator (ACC)indicates the number of increments that the timer has accumulated while the timer is active and is reset to zero when the timer is reset (useful if a program needs to record how long a particular operation took). The Allen-Bradley timers have three Boolean bits for ladder logic control: a timer enable bit (EN), which goes on when the timer accumulator is incrementing, a timer done bit (DN), which goes on after the set time delay, and a timer timing bit (TT) that is on when the accumulator is incrementing and remains on until the accumulator reaches the preset value.

All the programs shown in Figure turn on the output device after a set time delay from when there is an input. 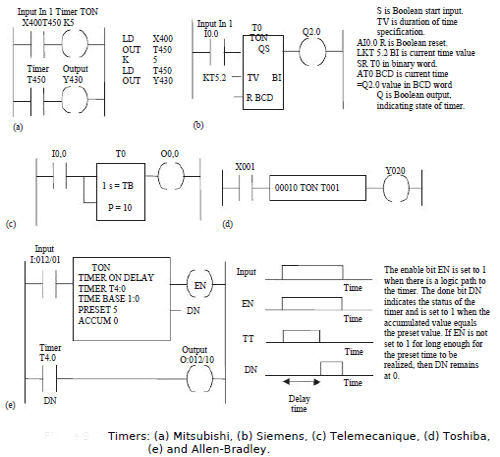 As an illustration of the use of a TON timer, consider the ladder diagram shown in Figure. When the input In 1 is on, the output Out 1 is switched on. The contacts associated with this output then start the timer. The contacts of the timer will close after the preset time delay, in this case 5.5 s. When this happens, output Out 2 is switched on. Thus, following the input In 1, Out 1 is switched on and followed 5.5 s later by Out 2. This illustrates how a timed sequence of outputs can be achieved. Figure shows the same operation with the format used by the PLC manufacturer in which the timer institutes a signal delay. Figure shows the timing diagram.

Figure shows two versions of how timers can be used to start three outputs, such as three motors, in sequence following a single start button being pressed. In Figure the timers are programmed as coils, whereas in Figure, they are programmed as delays. When the start push button is pressed, there is an output from internal relay IR1. This latches the start input. It also starts both timers, T1 and T2, and motor 1. When the preset time for timer 1 has elapsed, its contacts close and motor 2 starts. When the preset time for timer 2 has elapsed,

Its contacts close and motor 3 starts. The three motors are all stopped by pressing the stop push button. Since this is seen as a complete program, the end instruction Cascaded Timers has been used.

Timers can be linked together (the term cascaded is used) to give longer delay times than a re possible with just one timer. Figure shows the ladder diagram for such an arrangement.

Thus we might have timer 1 with a delay time of 999 s. This timer is started when there is an input to In 1. When the 999 s is up, the contacts for timer 1 close. This then starts timer 2. 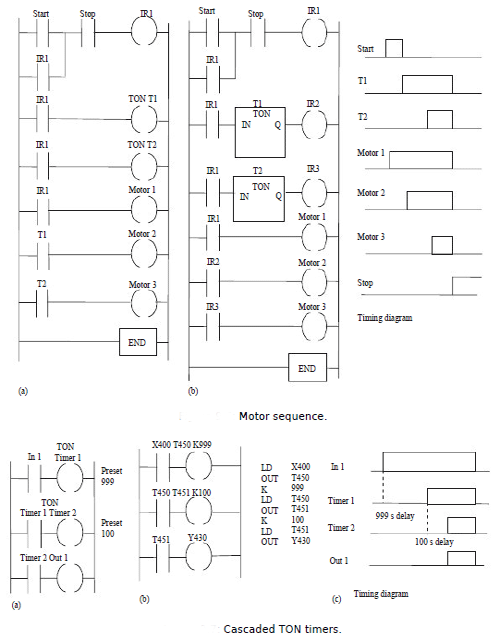 This has a delay of 100 s. When this time is up, the timer 2 contacts close and there is an output from Out 1. Thus the output occurs 1099 s after the input to In 1 started. Figure shows the Mitsubishi version of this ladder diagram with TON timers and the program instructions for that ladder.

This results in timer 1 in the first rung being switched off. This then causes its contacts in the second rung to open and switch off timer 2. This results in the timer 2 contacts resuming their normally closed state, and so the input to In 1 causes the cycle to start all over again. 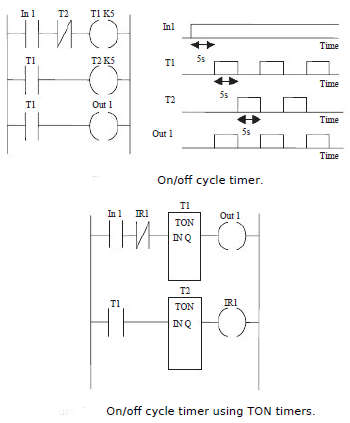