Figure shows how a on-delay timer can be used to produce an off-delay timer. With such an arrangement, when there is a momentary input to In 1, both the output Out 1 and the timer are switched on. Because the input is latched by the Out 1 contacts, the output remains on. After the preset timer delay, the timer contacts, which are normally closed, open and switch off the output. Thus the output starts as on and remains on until the time delay has elapsed. 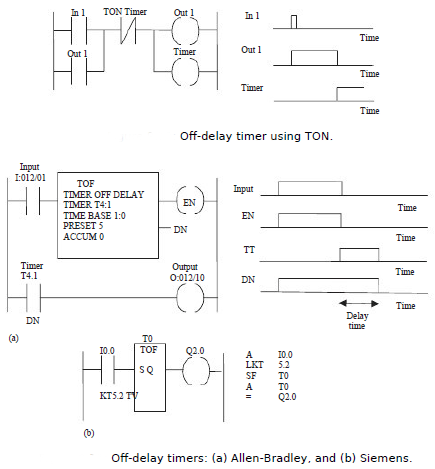 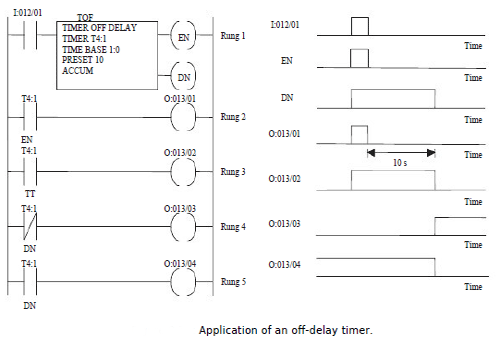 As an illustration of the use of an off-delay timer, consider the Allen-Bradley program shown in Figure TOF is used to indicate that it is an off-delay rather than on-delay (TON)timer. The time base is set to 1:0, which is 1 s. The preset is 10, so the timer is preset to 10s.

In the first rung, the output of the timer is taken from the EN (for enable) contacts. This means that there is no time delay between an input to I:012/01 and the EN output. As a result the EN contacts in rung 2 close immediately when there is an I:012/01 input. Thus there is an output from O:013/01 immediately when the input I:012/01 occurs. The TT (for timer timing)contacts in rung 3 are energized just while the timer is running. Because the timer is an off-delay timer, the timer is turned on for 10 s before turning off. Thus the TT contacts will close when the set time of 10 s is running. Hence output O:012/02 is switched on for this 10 s. The normally closed DN (for done) contacts open after 10 s, so output O:013/03 comes on after 10 s. The DN contacts that are normally open close after 10 s, so output O:013/04 goes off after 10 s.