In terms of ladder diagrams, an operator may be regarded as a ladder element, and LD is equivalent to starting a rung with open contacts for input A. Another instruction might be: OUT Q to indicate that there is to be an output to Q.

Mnemonic codes are used for operators, each code corresponding to an operator/ladder element. The codes used differ to some extent from manufacturer to manufacturer, though a standard under IEC 1131-3 has been proposed and is being widely adopted. Table 6.1 shows some of the codes used by manufacturers and the proposed standard for instructions used in this chapter (see later chapters for codes for other functions). Instruction List is a low-level textual language that is simple to implement and used by a number of PLC manufacturers, mainly for small and medium-sized PLCs. It is particularly suitable for small, straightforward programs. Some manufactures do not support ILs but use only higher-level language of structured text (ST). 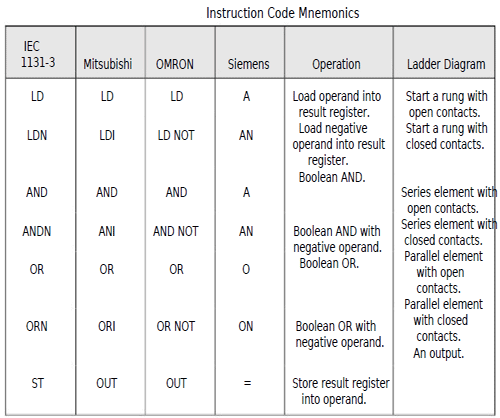 As an illustration of the use of IEC 1131-3 operators, consider the following:

In the first line of the program, LD is the operator, A the operand, and the words at the ends of program lines and in parentheses shown and preceded and followed by * are comments added to explain what the operation is and are not part of the program operation instructions to the PLC. LD A is thus the instruction to load A into the memory register. It can then later be called on for further operations. The next line of the program has the Boolean operation AND performed with A and B. The last line has the result stored in Q, that is,output to Q.

Labels can be used to identify various entry points to a program, useful, as we will find later,for jumps in programs; these precede the instruction and are separated from it by a colon. Thus we might have:

with the instruction earlier in the program to jump to PUMP_OK if a particular condition isrealized.

With the IEC 1131-3 operators, an N after the operator is used to negate its value. Forexample, if we have:

the ANDN operator inverts the value of ladder contacts and ANDs the result.

When looked at in terms of ladder diagrams, whenever a rung is started, it must use a “start a rung” code. This might be LD, or perhaps A or L, to indicate that the rung is starting with open contacts, or LDI, or perhaps LDN, LD NOT, AN, or LN, to indicate it is starting with closed contacts. All rungs must end with an output or store result code. This might be OUT or ¼ or ST. The following shows how individual rungs on a ladder are entered using the Mitsubishi mnemonics for the AND gate, shown in Figure.

Consider another example: an OR gate. Figure shows the gate with Mitsubishi notation.

The instruction for the rung in Figure starts with an open contact and is LD X400. The next item is the parallel OR set of contacts X401. Thus the next instruction is OR X401.

The last step is the output, hence OUT Y430. The instruction list would thus be: 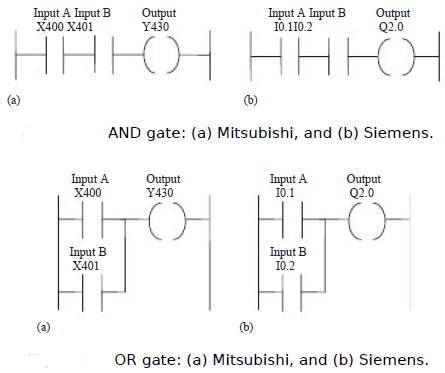 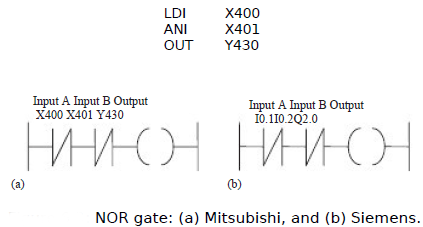 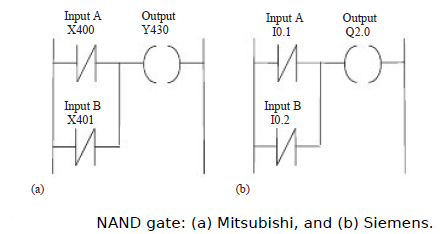 Figure shows the NOR gate with Siemens notation. Note that N added to an instruction is used to make the inverse. The instruction list then becomes:

Figure shows the NAND gate in Siemens notation. The instruction list is then:

The EXCLUSIVE OR (XOR) gate shown in Figure has two parallel arms with an AND situation in each arm.

The PLC thus recognizes that a parallel line is involved for the second line and reads together the listed elements until the ORB instruction is reached. The mnemonic ORB (OR branches/blocks together) indicates to the PLC that it should OR the results of the first and second instructions with that of the new branch with the third and fourth instructions. The list concludes with the output OUT Y430. The instruction list would thus be entered as:

Figure shows the Siemens version of an XOR gate. Brackets are used to indicate that certain instructions are to be carried out as a block. They are used in the same way as brackets in any mathematical equation. For example, (2 þ 3) / 4 means that the 2 and 3 must be added before dividing by 4. Thus with the Siemens instruction list we have instep 0 the instruction A(. The brackets close in step 3. This means that the A in step 0 is applied only after the instructions in steps 1 and 2 have been applied. 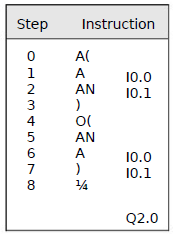 The IEC 1131-3 standard for such programming is to use brackets in the way used in the previous Siemens example, that is, in the same way brackets are used in normal arithmetic. This enables instructions contained within brackets to be deferred until the bracket is completed. Thus the IEC instruction list program: 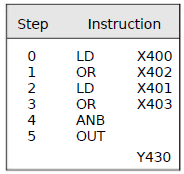 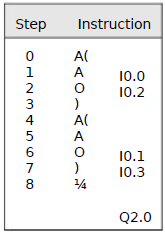 More Than One Rung

Figure shows the same program in Siemens notation. The ¼ instruction indicates the end of a line. The A or AN instruction does not necessarily indicate the beginning of a rung since the same instruction is used for AND and AND NOT. The instruction listis then:

The following tasks are intended to illustrate the application of the programming techniques given in this section and are the examples for which ladder diagrams and function block diagrams were derived in Section 5.7.

A signal lamp is required to be switched on if a pump is running and the pressure is satisfactory or if the lamp test switch is closed. Figure shows the ladder program and the related instruction list.

For a valve that is to be operated to lift a load when a pump is running and either the lift switch operated or a switch operated indicating that the load has not already been lifted and is at the bottom of its lift channel, Figure shows the ladder program and the related instruction list.

For a system in which there has to be no output when any one of four sensors gives an output and otherwise there is to be an output, Figure shows the ladder program and the instruction list. 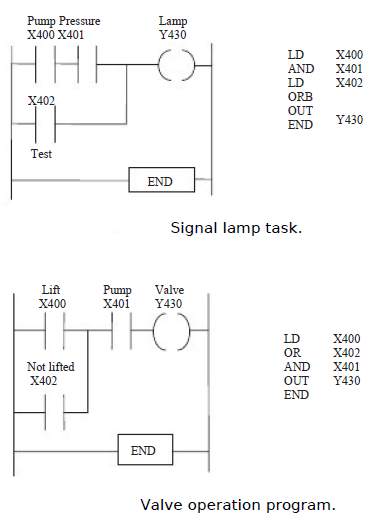