The term function block diagram (FBD) is used for PLC programs described in terms of graphical blocks. It is described as a graphical language for depicting signal and data flows through blocks, which are reusable software elements. A function block is a program instruction unit that, when executed, yields one or more output values. Thus a block is represented in the manner shown in Figure with the function name written in the box. 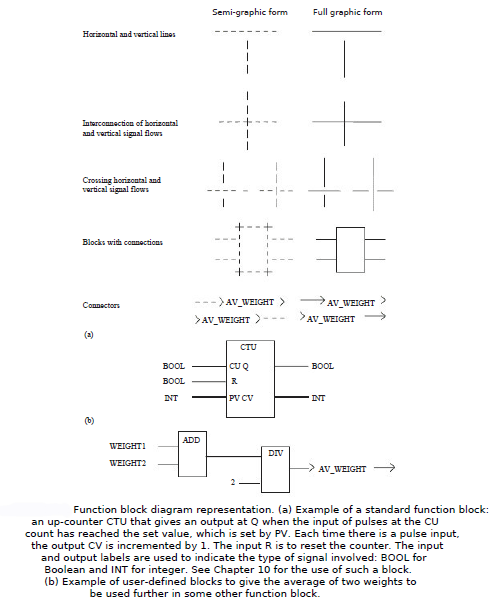 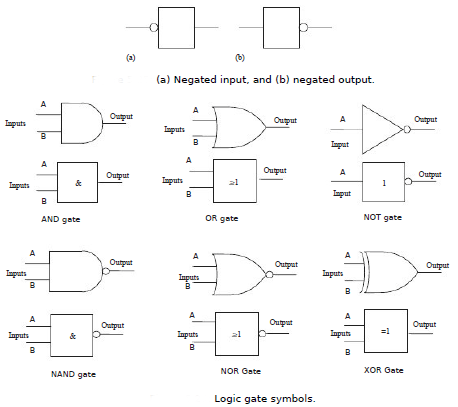 Cross-diagram connectors are used to indicate where graphical lines would be difficult to draw without cluttering up or complicating a diagram and show where an output at one point is used as an input at another. Figure shows an example of a function block diagram.

Function blocks can have standard functions, such as those of the logic gates, counters, or timers, or have functions defined by the user, such as a block to obtain an average value of inputs.

Programs are often concerned with logic gates. Two forms of standard circuit symbols are used for logic gates, one originating in the United States and the other an international standard form (IEEE/ANSI) that uses a rectangle with the logic function written inside it.

The 1 in a box indicates that there is an output when the input is 1. The OR function is given by !1 because there is an output if an input is greater than or equal to 1. A negated input is represented by a small circle on the input, a negative output by a small circle on the output. Figure shows the symbols. In FBD diagrams the notation used in the IEEE/ANSI form is often encountered. Figure shows the effect of such functional blocks in PLC programs.

To illustrate the form of such a diagram and its relationship to a ladder diagram, Figure shows an OR gate. When either the A or B input is 1, there is an output.

The function block diagram equivalent can be shown as a feedback loop. 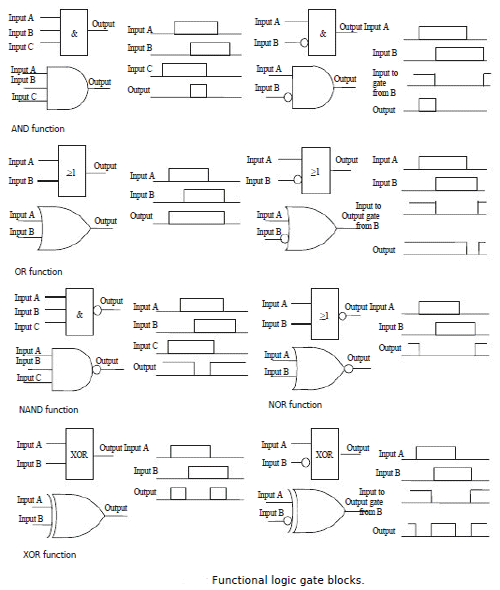 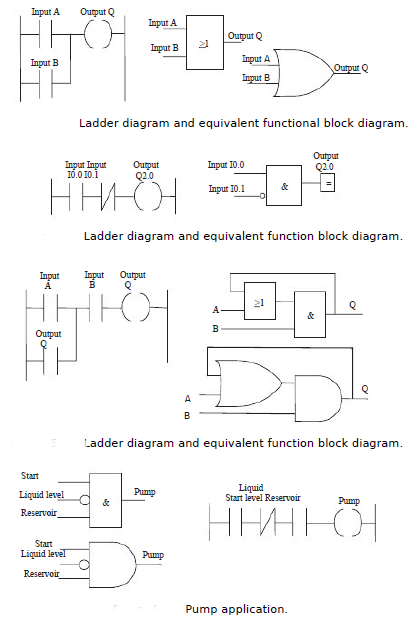 Ladder programs can be derived from Boolean expressions since we are concerned with a mathematical system of logic. In Boolean algebra there are just two digits, 0 and 1. When we have an AND operation for inputs A and B, we can write:

As an illustration of how we can relate Boolean expressions with ladder diagrams, consider the expression:

This tells us that we have A or the term B and C giving the output Q. Figure shows the ladder and functional block diagrams. Written in terms of Mitsubishi notation, the preceding expression might be: 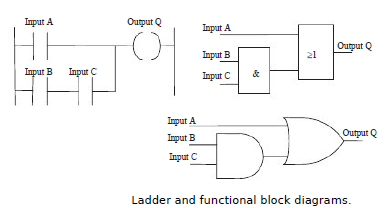 As a further illustration, consider the Boolean expression

Figure shows the ladder and functional block diagrams. Written in terms of Mitsubishi notation, the expression might be:and in Siemens notation:

Consider the XOR gate and its assembly from NOT, AND, and OR gates, as shown in Figure.

The input to the bottom AND gate is: 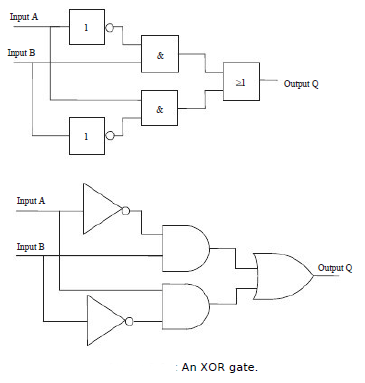 and so its output is:

The input to the T top AND gate is:

The ladder diagram to represent this idea is shown in Figure. 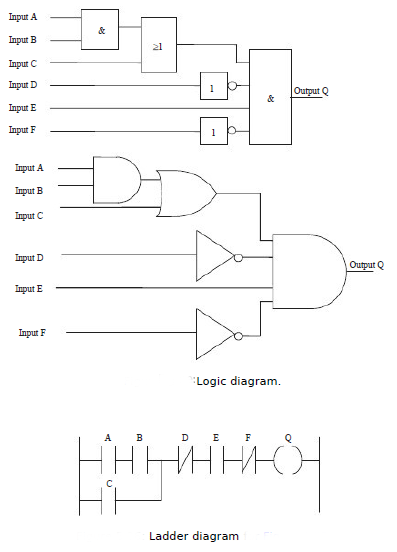