The following are some examples of control systems designed to illustrate the use of a range of input and output devices.

The motor then has to keep running until the item reaches the far end of the conveyor and falls off into the packaging area. When it does this, a switch might be activated that has the effect of switching off the conveyor motor. The motor is then to remain off until the next item is loaded onto the belt. Thus the inputs to a PLC controlling the conveyor are from two switches and the output is to a motor.

Figure shows how directional control valves can be used for a control system of arobot. When there is an input to solenoid A of valve 1, the piston moves to the right and causes the gripper to close. If solenoid B is energized with A deenergized, the pistonmoves to the left and the gripper opens. When both solenoids are deenergized, no air passesto either side of the piston in the cylinder and the piston keeps its position without change.

Figure shows a method that could be used to give an on/off signal when the liquid in acontainer reaches a critical level. A magnetic float, a ring circling the sensor probe, falls as the liquid level falls and opens a reed switch when the critical level is reached. The reedswitch is in series with a 39 O resistor so that this is switched in parallel with a 1 kO resistor by the action of the reed switch. Opening the reed switch thus increases the resistance from about 37 O to 1 kO. Such a resistance change can be transformed by signal conditioning to give suitable on/off signals.

In some situations, the requirement is to check whether there is a nontransparent item on the belt at a particular position. This can be done using a light emitter on one side of the belt anda photoelectric sensor on the other, there then being an interruption of the light beam when the item is at the required position. If the item had been transparent, such as a bottle, the photo electric sensor might have been positioned to pick up reflected light to determine when the item is in the required position. 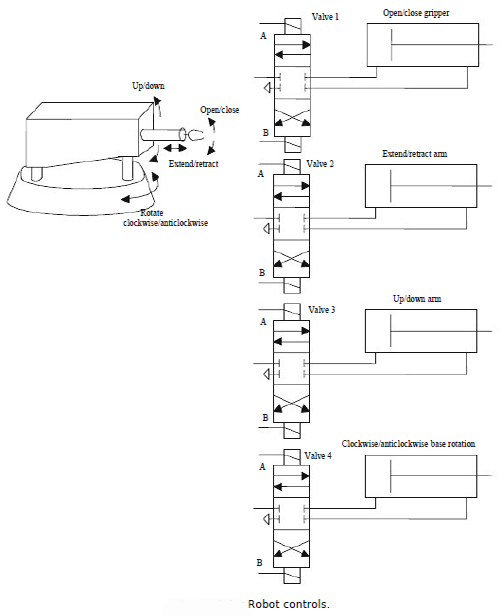