Personality Effects on Attitudes and Well-Being - Principles of Management

Throughout this we have emphasized that managers make a difference in helping employees feel better at work. Yet to some extent employee attitudes and well-being are also influenced by employees’ personalities. Personality refers to the relatively stable pattern of behaviors and consistent internal states that explains a person’s behavioral tendencies.

We say that personality explains behavioral tendencies because individuals’ actions are not perfectly consistent with their personality profiles in every situation. Personality is an abstract concept, so it isn’t the best information for deciding which job applicants to hire. However, it does influence how people react to their work environments. To understand how personality is connected to attitudes and well-being, we first need to learn about the five main clusters of personality traits.

Some scholars assert that this dimension also includes the will to achieve. People with low conscientiousness tend to be careless, less thorough, more disorganized, and irresponsible.

The opposite is introversion , which refers to those who are quiet, shy, and cautious. 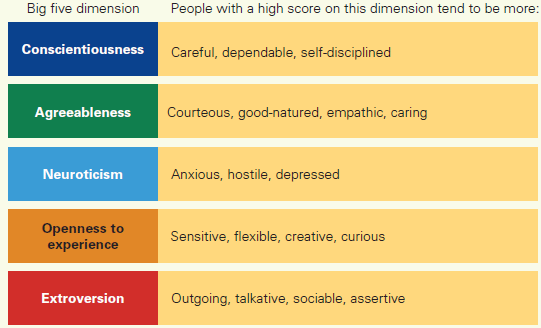 Introverts do not necessarily lack social skills. Rather, they are inclined to direct their interests more to ideas than to social events. Introverts feel comfortable being alone, whereas extroverts do not.

EFFECTS OF PERSONALITY ON EMOTIONS AND ATTITUDES

Have you ever noticed how some people seem upbeat most of the time while others are almost never happy about anything? To some extent people’s emotions are influenced by their personalities, not just by their workplace experiences. Some people have a natural tendency to experience positive emotions. These people have higher levels of extroversion; they are more outgoing, talkative, sociable, and assertive.

They also tend to have relatively low levels of neuroticism (high emotional stability); that is, they are more poised, secure, and calm. In contrast, people with high introversion (quietness, shyness, and cautiousness) and neuroticism (anxiety, hostility, depression, and self-consciousness) tend to experience more negative emotions at work and in other environments.

EFFECTS OF PERSONALITY ON STRESS AND WELL-BEING

Because personality affects our moods and emotions, it also influences our stress reactions to the work environment. People who are optimistic, confident, and often experience positive emotions tend to feel less stress. This characteristic refers to an emerging concept known as resilience.

Resilience is the capability of individuals to cope successfully in the face of significant change, adversity, or risk. Everyone has some resilience; it occurs every time we pull through stressful experiences. However, people with high resilience are better able to maintain equilibrium during stress. They hold their ground, so they don’t need to recuperate as much.

Personality is a major influence on the extent to which people have high resilience. Specifically, resilient people are more optimistic; they have more positive outcome expectancies. Optimism produces physiological changes that help the body fight stress, whereas depression and anxiety are known to increase health risks by altering the immune system. Three personality dimensions—neuroticism, extroversion, and conscientiousness—seem to be associated with resilience and optimism.

Not surprisingly, highly resilient people have low levels of neuroticism: They experience fewer negative emotions and can better control emotional impulses. Extroverted people tend to be more resilient because they are comfortable in social relationships, and social support is a known coping mechanism. Conscientiousness seems to be associated with resilience because conscientious people demonstrate better problem-solving skills. Problem solving helps people figure out how to remove or minimize sources of stress.

EFFECTS OF PERSONALITY ON PERFORMANCE

These five personality dimensions affect work-related behavior and job performance to varying degrees. People with high emotional stability tend to work better than others in high-stress situations. Those with high agreeableness tend to handle customer relations and conflict-based situations more effectively. However, conscientiousness has taken center stage as the most valuable personality trait for predicting job performance in almost every job group.

EFFECTS OF PERSONALITY ON CAREER SATISFACTION

One fairly successful application of personality knowledge is in the area of vocational choice. Vocational choice is not just about matching your skills with job requirements. It is a complex alignment of personality, values, and competencies with the requirements of work and characteristics of the work environment. You might be very talented at a particular job, but your personality and values must also be aligned with what the job offers.

John Holland, a career development scholar, was an early proponent of this notion that career success depends on the degree of congruence between the person and his or her work environment. Holland asserted that people can be classified into different types relating to their personality and that they seek out and are more satisfied in work environments that are congruent with their particular profiles.

Thus congruence refers to the extent to which someone has the same or similar personality type as the environment in which he or she is working. Some research has found that high congruence leads to better performance, satisfaction, and length of time in a career; other studies are less supportive of the model. 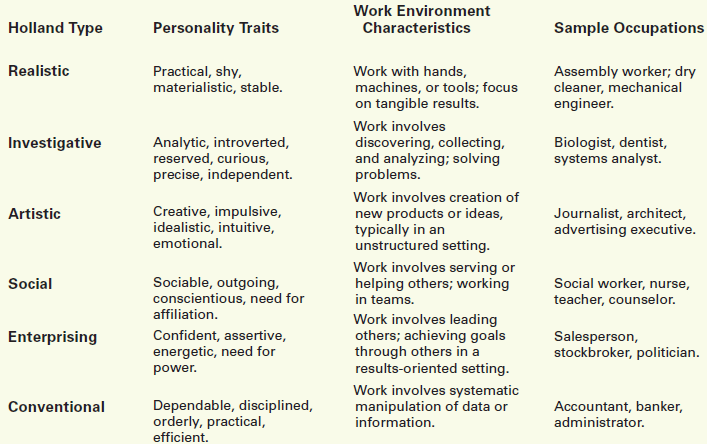 environments and suggests sample occupations representing those environments. Few people fall squarely into only one of Holland’s classifications. Instead Holland refers to a person’s degree of differentiation —that is, the extent to which an individual fits into one or several types. A highly differentiated person is aligned with a single category, whereas most people fit into two or more categories.

Because most people fit into more than one personality type, Holland developed a model shaped like a hexagon with each personality type around the points of the model. Consistency refers to the extent to which a person is aligned with similar types, which are next to each other in the hexagon (dissimilar types are opposite). For instance, the enterprising and social types are next to each other in Holland’s model, so individuals with both enterprising and social personalities have high consistency.

Holland’s vocational fit model is far from perfect. For example, the model refers to only a few of the Big Five personality dimensions described earlier, and some “opposing” categories in Holland’s hexagon are not really opposite to each other. Still, Holland’s model is the dominant model of career counseling today because it explains individual attitudes and behavior to some extent.

The main message for managers is that career development isn’t just about matching company needs with employee skills. It also about aligning employee personalities and preferences with job characteristics. This person–job matching process produces happier employees. And as we learned throughout this, the resulting positive emotions and attitudes potentially lead to superior job performance, greater customer satisfaction, and other beneficial outcomes for the organization. 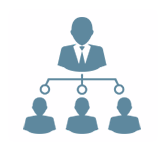